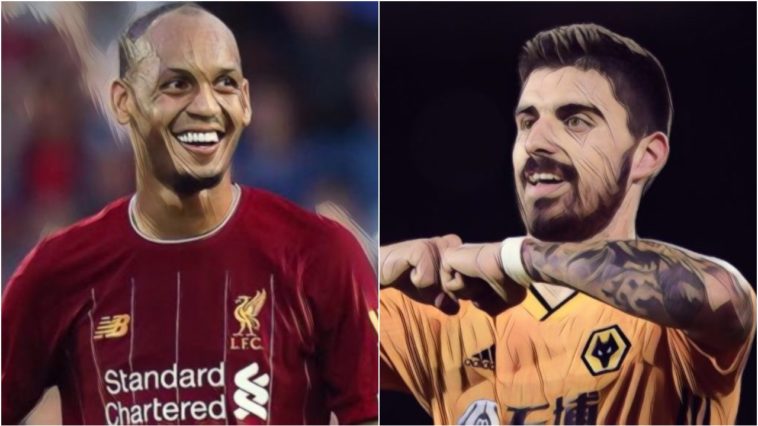 Presenting some of the standout statistics from gameweek 12 of Premier League action, featuring Fabinho, Pep Guardiola, Ruben Neves and Roberto.

Remarkably, Liverpool have not lost a single Premier League game that Fabinho has started for them. The record reads: 31 games, 26 wins, 5 draws.

The Brazilian contributed directly to the team’s 3-1 victory over Manchester City on Sunday, hitting a bullet of an effort from long range past Claudio Bravo for one of the best strikes of the season thus far. The former Monaco midfielder has been one of their best purchases of the past decade.

Pep still can’t get the better of Klopp

Man City’s awful record at Anfield continues; just two wins at the ground since 1981, when they won on Boxing Day. The scoreline that day, curiously enough, was also 3-1.

It was also the fifth time a Pep Guardiola side has failed to win at Anfield, losing four and drawing one of those fixtures. He has lost more away games there as a manager than at any other stadium.

On top of that, it was the ninth time Jurgen Klopp has bested the Catalan coach across the Bundesliga, Champions League and Premier League – no other manager has beaten Pep more than he has throughout his career. He took the defeat well, at least.

Pep Guardiola losing his head in front of the world.

2-0 is actually the safest lead (at Anfield, anyway)

They, whoever they are, say that 2-0 is the most dangerous lead to hold in football. The winning side relaxes, rests on laurels, allows the opponent back into the game, and then all of a sudden it’s a one goal game and anything could happen.

Well, not when Liverpool are playing at home, it can’t. As Sky Sports pointed out in one of their graphics when the Reds went two ahead on Sunday, they have never lost a Premier League game from such a position.

Out of the 232 home games in which they have been leading by two or more goals, they’ve won all but five of them, drawing the other five. Might be time to put that particular clichè out to pasture.

In another edition of “it’s our year”, Liverpool have reached 34 points after 12 games. They are one of only six teams in English football history to win 11 of their first 12 games, and the fifth since the EFL began awarding three points for a win in 1981.

The two clubs that failed to claim the title after racing out to such a phenomenal start? Manchester United in 1985/86 – considered one of, if not the, greatest collapses ever – and Liverpool in 1990/91. Whether that’s a good or a bad omen, we’ll leave up to you.

We’re not sure how often this happens, but it seemed unusual enough that we felt compelled to share this little stat: no player in gameweek 12 scored more than one goal.

Marcus Rashford came the closest, but he scuffed his opportunity to grab a brace in the second-half against Brighton. Only one player even managed to get more than one goal involvement across the entire weekend; Anthony Martial provided two assists, one each for Andreas Pereira and Rashford.

Fox outside the box

Ruben Neves loves scoring golazos from distance. It’s just his thing. He already has two this season, the first coming against Man United at home on the second weekend, and the most recent came on Sunday when he belted one in against Aston Villa.

Out of his 17 shots this campaign, however, none have come from inside the box. They have all come from outside the area, but this is merely continuing a trend from last year.

In 2018/19, Neves took 2445 total touches. Just three were inside the box. Two of those came from penalties he took. That means the Portuguese midfielder has scored six goals in the English top-flight while only taking four touches in the penalty area. Period.

Sometimes you only learn the value of a player when they are missing. That is certainly the case with Lukasz Fabianski, as the Polish goalkeeper has been out of action since picking up an injury against Bournemouth in September.

His replacement, Roberto Jimenez, has been, to put it bluntly, shambolic. Before the forced change in goalkeepers, West Ham had conceded eight goals and kept three clean sheets in six games. Since then they have conceded 12 goals and kept zero clean sheets.

Roberto made a clanger against Newcastle United the other week, and he did so again in the 3-0 defeat to Burnley, knocking the ball into his own net from a cross. He did make some good saves towards the end of the match, but he has been a net loss for his side since coming in.

This WhoScored graphic tells you all you need to know really: