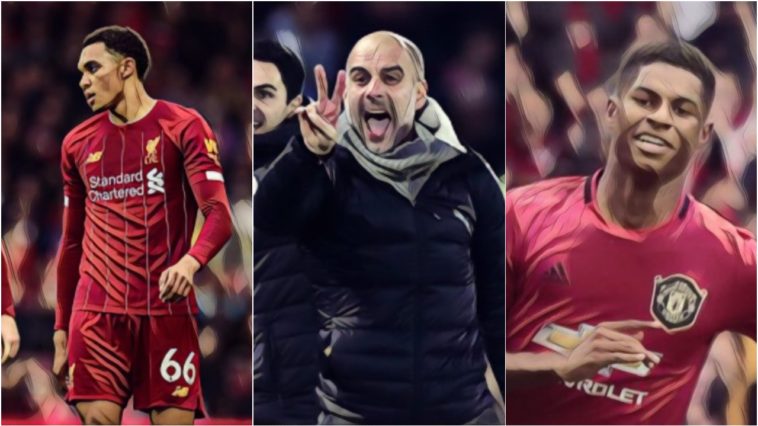 If there’s one thing Pep Guardiola hates more than anything, it’s losing (who among us doesn’t?). But when the mask slips on those few occasions he does get an L, it’s endlessly entertaining.

I don’t envy being one of the officials when he’s like this, though.

Pep absolutely losing his mind is the content I crave pic.twitter.com/jfcOYvhPFp

On a week where no one ripped it up individually to a huge degree – no one scored more than one goal – there was one performance that stood out in the underlying numbers.

One of the narratives going into this season was whether or not Marcus Rashford could become a true number nine for Manchester United following the exit of Romelu Lukaku. The verdict so far is: No. But that’s okay, if he can keep performing on the left side of a front three like he did against Brighton on Sunday.

The England international scored just the one goal, but it was the best kind where it smacked in off the crossbar before going in. He also had 1.68 expected goals (xG), the most of any player this past weekend, while having three shots on target out of seven, which only Son Heung-min could match. His 0.60 expected assists (xA) from two key passes were also the joint sixth highest across the league in gameweek 12.

Rashford: “There is nothing in the world of things, exchangeable for money or not, which can be treated as equivalent to a human being. The individual is irreducible. He is subject to change but not to exchange.” pic.twitter.com/mN0spdtXHx

So despite playing out wide, Rashford was United’s biggest attacking threat against the Seagulls – but why was that? The answer lies in the return of Anthony Martial, whose presence improves the team. The Frenchman acted as a pivot up top, assisting two goals in the process. This allowed Rashford to use his acceleration against defenders and cut inside, getting into dangerous positions numerous times.

Martial brings a level of equilibrium to this side they can’t locate when he’s not there, and Rashford benefitted from that big time this past weekend. Although it should be noted that Brighton played right into their hands by leaving so much space in behind.

Wolves finally look as if they are back in the groove after a rocky start to the campaign, beating Aston Villa 2-0 at home. The highlight of the match had to be Ruben Neves‘ bullet of a strike past Tom Heaton from outside the box.

The Portuguese midfielder only knows how to score one type of goal from play, and this was another example of that. In fact, since his Premier League career began last season, he has scored six goals – but has only had four touches inside the box. And the majority of those touches have come from penalties.

That reverse angle of Ruben Neves’ strike against Villa ?

Was this the Premier League goal of the weekend?

? Watch the best here and pick your favourite: https://t.co/fxtFQ6dmfx pic.twitter.com/F36gLPIaxn

Elsewhere, Fabinho struck a similarly sweet strike for Liverpool against Manchester City. Incredibly, the Brazilian has never lost a league match when starting for the Reds.

Liverpool‘s first goal has been mired in controversy, but for their second you have to admire the fast, exquisite ball movement in the lead-up to Mo Salah’s headed finish. There might not be a better switch this season than Trent Alexander-Arnold‘s 60-yard crossfield pass to Andy Robertson, which released his opposite full-back down the left-wing. The Scot’s cross to Salah was also pitch-perfect.

? – "If anything happened to those two it would diminish their attacking prowess enormously."

Ironically, it was exactly the type of move Pep loves to see from his own teams; creating an overload on one side of the pitch, then quickly switching play to where the space has been vacated on the other. Both Liverpool full-backs have provided 12 assists each in 2019.

For all the praise this column has lavished on Marcus Rashford today, he did miss an absolute sitter on Sunday. A classic tangling of feet stopped him from nabbing a brace from just five yards out against Brighton.

What happens when one of your biggest strengths becomes one of your biggest weakness? Lukasz Fabianski has arguably been West Ham‘s best player in the past year or so and almost certainly the best goalkeeper outside the top six. Without him, their defence would have leaked many more goals.

We’re seeing his impact now that he’s out injured and Roberto Jimenez is playing in his stead. The Spanish goalie made a howler last week against Newcastle United and he followed it up with another against Burnley, failing to catch a cross and instead knock it into his net for an own goal.

Roberto wasn’t alone, however, as Claudio Bravo fluffed an eminently saveable header from Sadio Mane early on in the second-half to gift Liverpool their third goal and effectively seal a home win. There will be so many what ifs surrounding this game if the Reds do go on to win the league, namely how a relatively even match like this could have turned out if Ederson was fit enough to play.

Either way, it’s been a comically bad week for the South American, and one wonders what has happened to the man who played a big role in Chile’s Copa America triumph and Barcelona’s most recent Champions League win.

So far this week Claudio Bravo has faced three shots on target, conceded three goals and been sent off.

I have tried to limit the VAR discourse in this column to an absolute minimum, because there really is nothing more boring in football today than that. But there really was no greater donkey this week than the Video Assistant Referee for Tottenham Hotspur‘s draw with Sheffield United.

It was tight but the replays show Lundstram was offside in the build-up#TOTSHU pic.twitter.com/xJyEVHMS4s

It’s not so much the official in Stockley Park, but the system that the Premier League has devised in implementing it. The margin for error in this decision was incredibly tight, making a mockery of the notion of “clear and obvious error”. There’s also the fact that it went back a phase in play, when everyone was under the impression that reviews would not do that.

On top of all that, the review took nearly four minutes. There’s so many other things that could be said about this, but we shan’t drag it out. I will finish with this: we are currently living with the worst case scenario of VAR. That decision would not have been made in any other league, but it just goes to show what a mess the Premier League has made of this.

Read Also: Premier League Team of the Week for Gameweek 12