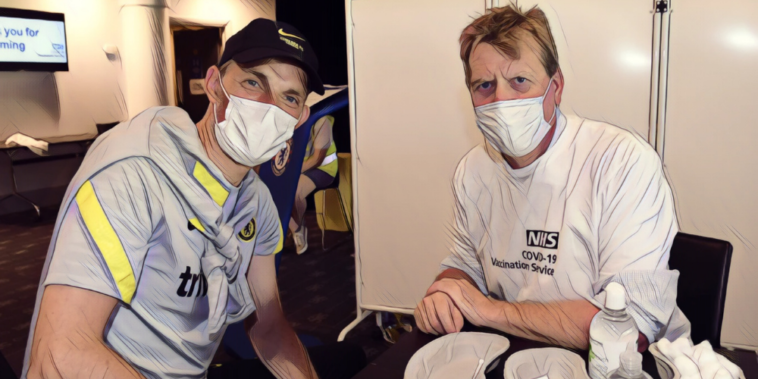 The Premier League plans to relax strict coronavirus protocols as a “reward” for clubs with high vaccination rates in their squads.

Premier League officials are keen to offer an incentive for clubs and players to take the vaccine against Covid-19 and have written to each side informing them of plans to reward clubs with a high percentage of vaccinated players.

According to the Telegraph, Leeds, Wolves and Brentford are the only sides to have gone public with their vaccination totals to date, revealing between 89-100 percent of their squads had received vaccines.

However, only seven of the 20 Premier League clubs had more than 50% of their squad and staff fully vaccinated.

With vaccine status set to be a ‘key criteria’ for the Government and health officials moving forward, a briefing note sent to Premier League sides revealed the league was considering how to best ‘reward’ those with a high percentage of fully vaccinated staff.

“According to the data we have, only seven clubs’ squads are more than 50 per cent fully vaccinated, so we have a way to go,” a briefing note sent to all Premier League clubs reads.

“We are considering if and how best we can ‘reward’ those squads/players who are most Covid-compliant and who have opted to be vaccinated.

“It is increasingly clear that full vaccination will be the key criteria for Government and health authorities, in terms of international travel and potential Covid certification at large-scale events.”

Chelsea’s N’Golo Kante became the latest Premier League footballer to be ruled out of action after contracting the virus, though manager Thomas Tuchel said he wasn’t ‘in a position’ to make ‘proper recommendations’ to his players, a stance that offers an insight into the difficulties of convincing players.

“It would be easy to say yes now and get maybe applause from a lot of people,” he said. “But at the same time do I have the right to say it? I’m not so sure. I can make the decision for myself, and everybody else needs to reflect about it and take a risk or not. I think it’s a serious question and vaccination seems to be a proper protection.

“I am vaccinated. But I don’t really see myself in a position to speak out proper recommendations. I think that would go too far. I’m a football coach, I’m not a 100% expert in this and I would leave it up to them. Everybody is adult enough and everybody lives in a free country, which is a good thing.

“Of course we take actions and then are responsible for them. We don’t like to lose players. But we are not now angry with N’Golo. We are concerned about him, as we are with any injured players who get a kick in a game.”