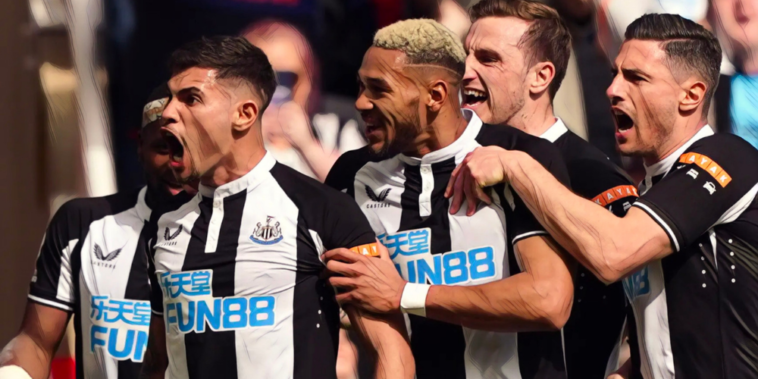 We’re back to preview the Premier League’s weekend action and discuss some of the division’s major talking points.

Frank Lampard and Dean Smith will go up against former sides, whilst Arsenal meet West Ham in a crucial London derby fixture.

Ahead of the weekend’s action we’ve picked out eight Premier League talking points.

Assessing the run-ins of Manchester City and Liverpool, it was widely viewed that the shared opponent in Wolves could have a major influence on who ends the season as champions.

Pushing for Europe and often awkward opposition, Bruno Lage’s side face both the challengers in the coming weeks but have stalled of late with three defeats from their last four games.

After 14 matches, Newcastle were winless and rock bottom of the Premier League.

Fast forward to gameweek 34 and Newcastle are in the top 10.

Hats off to you, Eddie Howe. 🎩 pic.twitter.com/4hDCrsaEST

Could it instead be Newcastle who are the major players in the run-in? The Magpies are flying under Eddie Howe with only the top two having won more points across their last 12 games, with a fourth consecutive league win against Norwich last time out lifting Newcastle into ninth.

In confident mood and backed by a support that has swelled with optimism since their takeover, Newcastle host Liverpool in Saturday’s lunchtime kick-off, a clash that comes between the Reds’ Champions League semi-final dates with Villarreal.

The trip to St James’ Park appears a real banana skin for Liverpool this weekend and City will also be wary of the threat a resurgent Newcastle can pose when the Magpies visit the Etihad next weekend.

Jota the odd one out at Liverpool?

Jurgen Klopp’s attacking options have provided the German with a welcome selection headache, with Diogo Jota having found himself as the odd one out in crucial recent fixtures.

The Portugal international has enjoyed the best season of his career with 21 goals in all competitions and trails only Mohamed Salah at Liverpool, but has found himself watching on during big-game clashes with Manchester City (FA Cup), Manchester United and Villarreal of late.

We believe until the end ⚽️ pic.twitter.com/Ly3UtCRC5Z

Luis Diaz’s immediate impact and Sadio Mane’s fine form in a central role have restricted his opportunities, though the 25-year-old should return to the starting side at Newcastle as the Reds reshuffle.

The quick turnaround between the club’s Champions League semi-final means a rested Jota should start at St James’ Park and the forward will be desperate to prove a point in the North East.

With an FA Cup final and potential Champions League final on the horizon, Jota will be aiming to prove he belongs in Liverpool’s first-choice front three.

Norwich City are all-but down after last weekend’s 3-0 defeat at home to Newcastle, a result which leaves the Canaries ten points from safety with 15 left to play for.

The appointment of Dean Smith has done little to turnaround the club’s latest relegation campaign and their drop into the Championship could be confirmed at Smith’s former side this weekend.

Smith’s sacking at Aston Villa was greeted with surprise by some despite a poor run of results and the boyhood Villa fan will have watched on as Steven Gerrard took the reins at Villa Park.

Neither side have markedly improved since the change in management, but Norwich will be confident that Smith is the right man to lead a promotion push next season as the club’s yo-yo existence continues.

Burnley to continue climb at Watford?

Burnley are out of the relegation places after back-to-back wins, the Clarets having responded brilliantly to the change in management at Turf Moor.

U23 manager Mike Jackson has overseen seven points from the last three games and a trip to face Watford this weekend presents a fine chance to continue their climb away from danger.

3 – Burnley have won three consecutive Premier League matches at Turf Moor for the first time since January 2017 (a run of five). Neverland. pic.twitter.com/818zpsy3iI

Watford have the worst home record in the Premier League and whilst Burnley’s record on the road is little better, a confident Clarets team will have belief that another three points can be won at Vicarage Road.

With Everton struggling to find their form and possessing a more difficult run-in on paper, this could be a pivotal weekend in the battle for Premier League survival.

Lampard out to upset old employers

Everton are in desperate need of points and despite a positive showing in last weekend’s Merseyside Derby, the Toffees came away from Anfield without a point and in the Premier League’s bottom three.

The club’s fixtures fail to get much easier as Chelsea arrive at Goodison Park on Sunday and Lampard faces his old employers for the first time since being sacked in January 2021.

Lampard will hope to take the positives from their showing at Liverpool, as the Toffees frustrated their city neighbours for much of the contest.

That said, Lampard has won just three of his 12 league games in charge and has lost eight, with time running out for Everton to find the points required.

Taking pride in defeat is no good for Everton at this stage with Burnley backed by momentum. An upset of a side he knows better than most would be a good way to start their survival push this weekend.

Just when it appeared Antonio Conte had found the formula at Tottenham, familiar flaws have once again resurfaced and successive blanks have seen the side drop out of the top four.

Lacklustre performances against Brighton and Brentford have seen no goals scored, after netting 25 across their previous seven Premier League games.

Spurs host a Leicester team distracted with European football this weekend, with the clash coming in between the Foxes two-legged Conference League semi-final with Roma.

Brendan Rodgers’ team appeared to have one eye on Europe during the goalless draw with Aston Villa last weekend and Spurs must take advantage and keep alive their Champions League ambitions.

The date with Leicester is followed with a trip to Anfield and a potentially pivotal North London derby with top four rivals Arsenal. It is a fixture a shot-shy Spurs can now allow to slip by.

Leeds’ 7-0 defeat at Manchester City was arguably the beginning of the end for Marcelo Bielsa, who – for all of his qualities – often struggled to find the balance against the Premier League’s big boys.

Leeds were cut apart in embarrassing fashion as City racked up the joint-biggest win of the Premier League season, the champions producing a punishing performance against a team who took four points from them in their 2020/21 meetings.

Jesse Marsch’s team are not clear of relegation trouble yet and drew 0-0 with Crystal Palace last weekend, a result that leaves The Whites hovering nervously above Burnley and Everton in the battle to beat the drop.

Leeds will start as rank outsiders despite a five-game unbeaten run, but will take heart from the flaws that Real Madrid exposed in their Champions League semi-final with City on Tuesday.

The Spanish side were second-best and rode their luck at times, but three goals have ensured the tie remains all to play for after a 4-3 thriller – in City’s favour – at the Etihad.

Arsenal’s trip to West Ham looked like one of the Gunners’ most difficult assignments during their run towards Champions League qualification, but circumstances have since provided the North Londoners with a welcome boost.

The fixtures comes sandwiched between West Ham’s Europa League semi-final with Eintracht Frankfurt and David Moyes has already shown his focus is on Europe, naming Declan Rice, Jarrod Bowen and Michail Antonio on the bench for the 1-0 defeat to Chelsea last weekend.

The Hammers have been further depleted after Craig Dawson’s red card at Stamford Bridge, a situation that leaves the club without a recognised senior centre-back given the injuries to Angelo Ogbonna, Kurt Zouma and Issa Diop.

It will be a makeshift backline for the Hammers at the London Stadium and Arsenal  – with Eddie Nketiah having impressed leading the line in recent fixtures – will be confident of taking another step towards the top four.