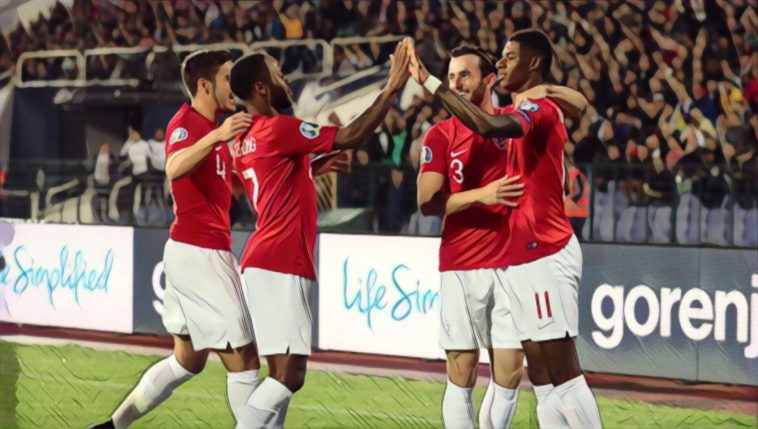 Recapping and reviewing the performances of Premier League players on international duty in Europe this past week.

England recovered from their 2-1 defeat to Czech Republic last week in the best way possible, by putting six past the hapless Bulgarians.

The match was marred and completely overshadowed by the racist antics of sections of the home crowd, some of whom could be seen giving Nazi salutes, but the Three Lions put in a strong performance in the face of such adversity.

Marcus Rashford opened the scoring with a cracking finish in the seventh minute, a much-needed goal for the 21-year-old who has come under increasing scrutiny in recent weeks. Raheem Sterling, who has only found the net twice in his last four league games, scored a brace, as did Ross Barkley, while Harry Kane rounded out the game. The Tottenham Hotspur striker scored with just over five minutes to go.

In complete contrast Ireland, with six Premier League players in their starting line-up, were as dour and depressing to watch as ever. They played a little better in Geneva than they did in Georgia last week, but were still deserving losers against Switzerland.

Seamus Coleman picked up two yellows here to go with the two he picked up for Everton against Burnley, giving away a penalty to the Swiss in the process. He will now not only miss the Toffees’ next fixture against West Ham United, but also the crunch tie against Denmark that could decide whether Ireland go through automatically or have to face a playoff next spring. The right-back is in danger of losing his place in the long-term in each respective team to Djibril Sidibe and Matt Doherty of Wolves.

Brighton’s Aaron Connolly huffed and puffed but he wasn’t getting any good service from the midfield, which featured a lethargic Jeff Hendrick.

The Netherlands followed up their victory over Northern Ireland with an away win in Bulgaria. Liverpool‘s Gini Wijnaldum got both goals as the game ended 2-1. The midfielder turns into a goal machine when he links up with the international team, scoring five times in this campaign as well as providing two assists.

It seems David De Gea can’t catch a break. The Manchester United goalkeeper was reinstated to the Spain starting line-up having lost his place to Kepa Arrizabalaga and put in a stellar performance against Sweden, but ended up being subbed off after an hour due to injury.

Although De Gea conceded a goal in the 50th minute, he made some terrific stops, including a double save and this brilliant outstretched save to deny the Swedes.

It’s since been confirmed that the De Gea has an abductor tear that won’t keep him out for long, but means he will almost certainly miss this Sunday’s huge clash with Liverpool. It’s a blow to the Spaniard just as he looked as if he was getting back to his best.

It was a mixed night for the Premier League players involved in Wales 1-1 draw with Croatia, in which Gareth Bale scored a vital equaliser. Crystal Palace’s Wayne Hennessey made a brilliant save from an Ivan Perisic header in the first-half, before Spurs’ Ben Davies work rate and perfect pass set up the Real Madrid star. Liverpool defender Dejan Lovren was slow to track the goalscorer’s run and floundered when he tried to make a last ditch tackle.

Daniel James was relatively dangerous on the left wing, with his best chance coming in the 55th minute but he shot straight at the goalkeeper. Of greater concern, however, was the strange incident in which the Manchester United winger seemingly faked getting knocked out.

“I didn’t get knocked out, fortunately.”

Wales and Manchester United winger Daniel James went down after a heavy challenge in a #EURO2020 qualifier against Croatia, but says he wasn’t knocked unconscious: https://t.co/ilmtw8SUBE pic.twitter.com/StsG5q18uk

James clashed with a Croatian player and appeared to have been laid out cold, but upon closer inspection his head did not come into contact with the opposition player. Wales manager Ryan Giggs said afterwards that James was just being “streetwise”, but the ‘act’ was incredibly irresponsible when you consider the seriousness of concussion. Hopefully this is not a sign of things to come when it comes to footballers and suspected head injuries.

For the second qualifier running, Olivier Giroud scored France’s only goal of the game. Usually club football is a means for footballers to make a case to play for their country, but the Chelsea striker is flipping that notion on its head with his record for Les Bleus. Tammy Abraham might be keeping him out of the other Blues team right now, but he’s demonstrating he still has a part to play in this campaign.

Turkey scored with their only shot on target to earn themselves a precious point at the Stade de France, although they made fools of themselves with their army salutes at the final whistle. The result effectively, if not mathematically, eliminates Iceland from automatic qualification, although they will be in the playoffs in that case.

It’s been a tough campaign for Scotland, but they at least restored a modicum of pride in the jersey by thrashing San Marino 6-0. John McGinn scored a hat-trick on the night, the Aston Villa midfielder playing more like a penalty box poacher at Hampden Park. Liverpool left-back Andy Robertson also formed part of a backline that kept a clean sheet on the night, while Scott McTominay had an easy time of it in midfield.

Manchester City fans have not been wholly enamoured with Ilkay Gundogan of late, but he lit it up for Germany this week in a routine 4-0 over Estonia. The midfielder scored twice in the space of six minutes, while former Liverpool player Emre Can opened the scoring in the 14th minute.

Ukraine sealed their ticket to Euro 2020 with a shock 2-1 victory over reigning champions Portugal, with one of their goals coming from West Ham attacker Andriy Yarmolenko.

It was Man City utility man Oleksandr Zinchenko who got the most joy out of the result, though, celebrating wildly in his post-match interview and in the television studio. You can understand why he got so excited – it’s only the fourth the country has ever qualified for a major competition since becoming a FIFA member in 1992.

Finland are just a point away from qualifying for their first ever major tournament (excluding Summer Olympics) thanks to a Teemu Pukki brace against Armenia. The Finnish forward hasn’t scored in his last three league games for Norwich City, but could be coming back to form after this 3-0 win. It looks like the Pukki Party is coming to Euro 2020.

Elsewhere, Michy Batshuayi scored for Belgium in their 2-0 win over Kazakhstan.

With England’s seniors having over the international break, attentions turned to the under-21s, who destroyed Austria 5-1 in Euro 2012 qualification.

Eddie Nketiah, on loan at Leeds United from Arsenal, scored a hat-trick, but it was Callum Hudson-Odoi who stole the show with this insane solo run and strike for his second goal of the evening.

The Chelsea winger is showing precious few ill effects from the injury that kept him out of the latter end of last season and he will surely be a massive boon to Frank Lampard’s attacking weaponry this campaign.

Meanwhile, Ireland could not build on their impressive draw with Italy last week, losing 1-0 to Iceland away, Celtic defender Lee O’Connor received a red card in the second half, the second successive game an Irish player has been sent off.