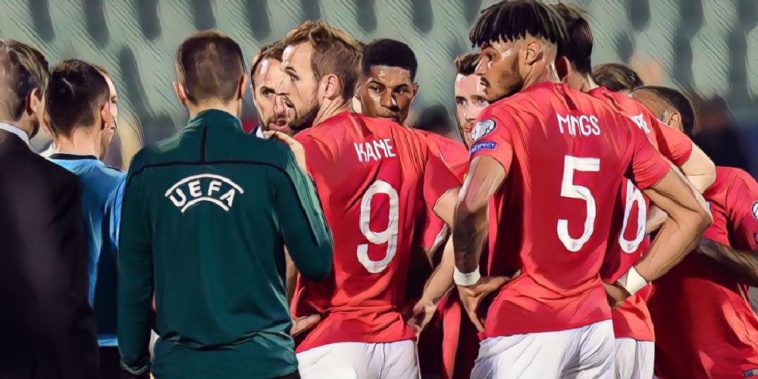 It was a game ahead of which talk of racism had dominated the pre-match buildup, and despite England racking up a 6-0 win in Bulgaria, the post-match fallout is being dominated by the ugly scenes witnessed in Sofia.

The match was already being played in front of a partially closed stadium due to racism from the Bulgarian support earlier in the season, though despite the much-publicised build-up to the game, that didn’t stop a section of the narrow-minded home support abusing England’s black players.

It had been speculated that England would walk off the pitch in unison if there were to suffer racist abuse, though they stopped short of doing so, the referee stopping the game twice to issue a warning to the crowd, in line with UEFA’s protocol.

Speaking after the game Southgate confirmed that during the second stoppage, which happened four minutes before the break, England’s players and coaching staff discussed walking off.

“The players were keen to finish the half and then have the discussion at half time,” Southgate confirmed.

“I’m incredibly proud of the players and all the staff. Of course, we could be criticised for not going far enough. But I think we have made a huge statement and, frankly, we were in an impossible situation to get it right for the satisfaction of everyone.”

Very proud moment for me and my family tonight to make my @England debut. The unfortunate incidents in the game were handled as well as possible & proud of how we handled it ??????? pic.twitter.com/ai1Cn2ZJYI

Before the game, Bulgaria manager Krasimir Balakov pointed the racism finger towards England, though Man City‘s Raheem Sterling was quick to re-highlight his comments following the less than savoury scenes.

Mmmmh … Not sure about this one chief https://t.co/Jyjr6vFtA8

The forward scored twice and assisted once in attempt to silence the ‘idiots’ as England put their disappointing 2-1 defeat to the Czech Republic behind them.

Feeling sorry for Bulgaria to be represented by such idiots in their stadium. Anyway.. 6-0 and we go back home, at least we did our job. Safe travel to our fans, u guys did well ??❤️

Marcus Rashford has been slammed for his poor form for Manchester United in recent weeks, though opened the scoring with a rasping strike, and he added that he was proud that the Three Lions ‘Rose above it’.

Not an easy situation to play in and not one which should be happening in 2019. Proud we rose above it to take three points but this needs stamping out. pic.twitter.com/jTnUGOa8z2

England captain Harry Kane had a massive part to play in the game, scoring one and assisting three, as well as hitting the post in the second half, and he leapt to the defence of his teammates in what he labelled ‘disgraceful circumstances’.

Great performance and I’m proud of the togetherness we showed in some disgraceful circumstances. Racism has no place in society or football. It needs stamping out for good. Also a massive congrats to @OfficialTM_3 on a great debut ? #ThreeLions pic.twitter.com/yS9pEFeXie

And he wasn’t the only one…

Good win under difficult circumstances. There is absolutely no place for scenes like that. Proud of the team tonight ?? @England pic.twitter.com/kOOBeW5hSK

The best way to bounce back. Proud of the team. There’s no place in football for that – disgraceful behaviour. Something must be done. ??????? @England

Absolutely disgusted to have witnessed the behaviour of some of the crowd tonight but so proud of every single one of our players and staff. We stand together. Thanks to all of our travelling fans for your support ??? pic.twitter.com/e8pchzO6tT

The football did the talking tonight. Proud of everyone❤️ @England

What a result tonight under difficult circumstances. Our football did the talking !! Congrats @OfficialTM_3 on your debut bro. Nice to share the pitch with you for our country ??❤???????
P.s should have added to my england tally ???‍♂ pic.twitter.com/QV57FfSbFB

Read – The Premier League Crisis Rankings ahead of Gameweek 9

See also – From Sven’s lowest moment to the wally with a brolly, England’s worst qualifier defeats in recent history