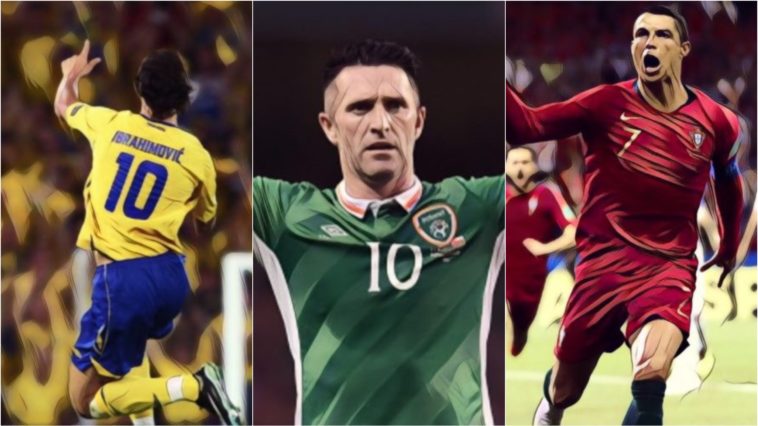 Cristiano Ronaldo’s one-man assault to claim every goalscoring record ever invented continued this week, the Portuguese superstar scoring the 700th goal of his magnificent career during Portugal’s Euro 2020 qualifier with Ukraine.

It was the latest landmark in Ronaldo’s extraordinary legacy and continued his prolific record in European Championship qualifying, but where does he rank amongst all-time greatest goalscorers in qualification history?

The Swedish superstar is still going strong at the age of 38, though the former Manchester United man called time on his international career as arguably his country’s greatest ever player back in 2016.

One of the greatest forwards of his generation, 11 of Ibrahimovic’s qualifying goals would come as Sweden reached the 2016 finals, though after a disappointing group stage exit he would retire from international duty at the conclusion of the tournament.

Known as the ‘Bull of Bosporus’, Sukur broke several goalscoring records in a career which spanned more than two decades, including becoming the greatest goalscorer in the history of the Turkish national team during a memorable international career.

Sukur would net seven times as Turkey qualified for the 1996 championships in England, though failed to replicate that form at the finals as his side were eliminated without scoring a single goal.

Capped 112 times, Sukur would score 51 international goals, including a huge 19 in Euro qualifying. His goals would help Turkey once again reach the finals in 2000, where they were eliminated in the quarter-finals by Portugal.

The Danish forward couldn’t buy a goal during a disappointing Premier League spell at Newcastle, though Tomasson was a different proposition in the red shirt of his national team.

He would fire six goals as Denmark qualified for the finals in 2000, while another haul of five saw them once again qualify for Euro 2004, where he was named in the team of the tournament.

A deep-lying forward, Tomasson’s best personal haul would be in qualifying for Euro 2008, though Denmark failed to reach the finals despite his eight strikes.

The former AC Milan striker would remarkably never go more than two qualifiers without finding the net, retiring from international duty in 2010 as his country’s joint all-time record goalscorer with 52 goals.

The talisman for the Irish for virtually the entirety of his international career, Keane would prove prolific at international level scoring 62 times for the Boys in Green.

The joint-fifth highest European international goalscorer of all-time, Keane is also the second most prolific player in the history of Euro qualifying.

Despite the regularity of his cart-wheeling celebration in qualifiers, Keane would reach just two finals, in 2012 and 2016 where a place in the last 16 was Ireland’s best finish. His 23 goals would prove the benchmark, until it was surpassed by one man in September 2019…

Who else? One of the game’s all-time greats continues to set new records and landmarks, surpassing Keane to become the greatest goalscorer in European Championship qualifiers in September 2019. He achieved the feat in typical Ronaldo fashion, hitting four goals in a thrashing of Lithuania.

The five-time Ballon d’Or winner further extended his record by scoring in October’s qualifiers with Luxembourg and Ukraine, the latter being the 700th goal of his illustrious career.

Another four goals over the latest international break mean Portugal’s all-time record goalscorer now has 99 goals in 164 caps for his national side, whilst he is quickly closing in on Iranian Ali Daei’s record of 106 goals as the greatest goalscorer in the history of international football.