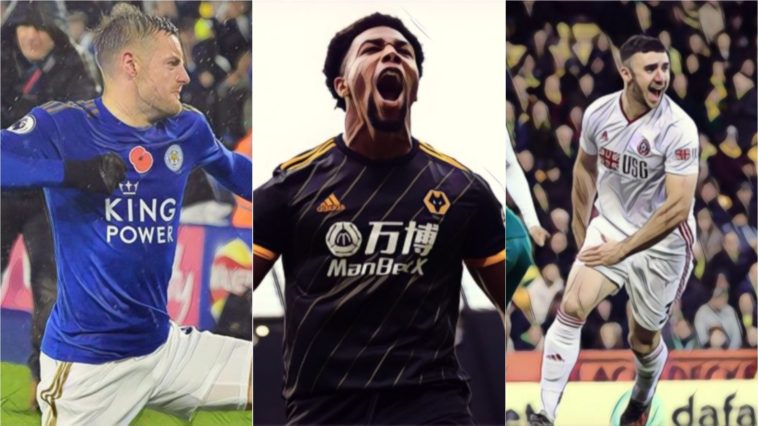 We’re going to ignore the so-called ‘big’ clubs for a moment and recognise the rest of the Premier League with our non-top six team of the year so far.

And just for clarity, by non-top six we mean every other team but Arsenal, Chelsea, Liverpool, Manchester City, Manchester United and Tottenham Hotspur. Although some of them won’t be in the ‘big six’ for much longer, the way the 2019/20 season is going.

The next Manchester United number one? The way Dean Henderson is playing while on loan in Sheffield, while at the same time David De Gea’s performances are deteriorating, you couldn’t count it out happening sooner rather than later.

The one blemish on Henderson’s resume this season was the clanger he allowed against Liverpool, but otherwise he has been stellar for the Blades.

It would easy to claim that Jonny Evans is a man reinvigorated at Leicester, but it’s entirely possible to look back at the past four years since he left Man United and come to the conclusion that he’s always been the same defender who won three Premier League titles at Old Trafford.

The Northern Irishman, who has now played the exact same number of league games away from United as he did with them, has been incredibly solid in the centre of defence for the Foxes, and has also been a bit of a goal threat from set pieces, scoring one header this season.

They used to say a player’s career could only ever go downhill after leaving a club like United, but Evans’ sale in 2015 might just be one of the worst pieces of business the Red Devils have ever done.

The Turkish centre-back has been a revelation since breaking into the starting line-up at Leicester this year, so much so that the club’s decision to sell Harry Maguire to Man United looks better and better with each passing day.

Söyüncü, who has played every minute this season, has made the fifth most clearances (92) of any player. Against Norwich City he showed the good and bad side of his game; he was beaten badly for pace by Teemu Pukki of all players for the game’s opening goal, before making an excellent last ditch stop against the same player in the second half. His timing can be perfect and is a huge asset to Leicester.

This XI could very easily be the Leicester show, especially in defence where they have been the best in the league, but Sheffield United deserve their props too. The Blades have kept seven clean sheets so far and conceded just 16 goals, which is the third best defensive record in the division.

In Enda Stevens they have a very capable left-back who can defend and attack in equal measure. The Irishman is usually positioned at wing-back, although in Chris Wilder’s system he also comes inside when the centre-backs are overlapping. A composed player on the ball, he’s able to hold it up, beat a man and provide chances for others on top of his defensive duties.

The former Shamrock Rovers player does have one error leading to a goal to his name, but the fact that he has been playing so well on a team with ‘lesser’ talent around than most other Premier League sides means he gets the edge in a highly competitive position. Lucas Digne, who has completed a ludicrous 43 key passes for Everton, and Leicester’s Ben Chilwell just miss out.

Few players have personified the concept of untapped potential quite as much as Adama Traore. The Spanish winger has been a takeon machine forever, completing dribbles like it was no one’s business wherever he went. But he has never been able to convert that into end product. Until now.

Traore has three goals and three assists to his name thus far, tripling his output in both categories from last year when he was used almost exclusively as an impact sub. His threat has become increasingly clear as the campaign has worn on, though; only three players have drawn more fouls (42) than him, while an astonishing 25 players have been booked in their attempts to stop him. And even then, he’s still completed 79 successful dribbles, second only to the takeon master Wilfried Zaha.

Best of the 2010’s: A selection of the finest goals of the decade

One of the surprise packages of the season thus far, John Lundstram has been lethal in the attacking third for Sheffield United. The midfielder is often arriving in the box at exactly the right time, latching onto crosses or through balls in very good shooting positions. Lundstram currently has three goals and three assists to his name.

Defensive midfielder Wilfred Ndidi, who leads the league for interceptions (51), is unlucky to miss out in this selection, as he’s having another very strong season for Leicester.

James Maddison has already been linked with a move to the likes of Man United at the age of 22, but you can hardly be surprised given the kind of form he has been in. So far this season he has provided three goals and five assists.

The Englishman, who somehow only broke into the national set up recently, runs the show in the middle of the park for Leicester, getting on the ball at every opportunity and setting up his attackers with quality chances. He’s also a dab hand at set pieces.

The Arsenal defence were SCRAMBLING 😩

Jack Grealish current plays a type of free number ten role in Dean Smith’s system, but the Aston Villa man often drifts in from the left, which is where he started out his career.

The former Irishman’s development from tricky but inconsistent winger to a playmaking false ten with end product has shone through for the Villains on their return to the Premier League, even if the team has struggled for consistency. They allow the opposition far too many chances, but they are at least creating plenty of their own, primarily through the number ten.

Grealish, who has five goals and four assists this year, has been such a threat that other teams clearly make it part of their plan to target him; he has been fouled 73 times this season, by far the most of any top flight player. The midfielder also has two goals in the League Cup, of which they are in the semi-finals.

A shoo-in for inclusion, Jamie Vardy has been rolling back the years for Leicester this season. He is currently the league’s top goalscorer with 17, which means he has been finding the net at a rate of nearly a goal per game. And at the age of 32 as well.

The Englishman is also just one goal shy from becoming the fifth highest goalscorer of the Premier League in the 2010’s, despite only making his debut in August 2014. Considering he started out the decade with Fleetwood Town, that’s phenomenal.

He polishes off a stunning counter attack from Leicester 🦊

Danny Ings increased his tally for the season to 11 league goals – the second highest tally in the league – with a brace in Southampton‘s recent win over Aston Villa. Ten of those strikes have come in the last 12 games, propelling the Saints to three wins out of their last five matches and out of the relegation zone.

The former Liverpool striker has had nine big chances this year and he’s scored eight of them. Now that’s what you call clinical. If he stays fit and continues scoring consistently, could Gareth Southgate consider putting him in the England squad for Euro 2020? Stranger things.