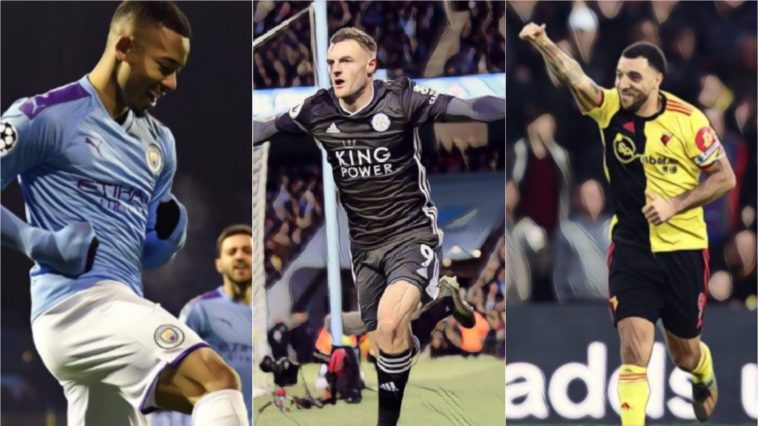 Presenting some of the standout statistics from gameweek 18 of Premier League action, featuring Liverpool’s lead, Jamie Vardy’s agelessness, Man United’s wretched record against the bottom 12, Watford discover home form, and Gabriel Jesus getting off the mark at home.

Liverpool didn’t even play this past gameweek, and yet their situation at the top of table arguably improved anyway. Their closest rivals in the league, Leicester City, lost, meaning they can extend their lead to 13 points when they return on Boxing Day. The only team to lead by as many as ten points on Christmas Day and not win the title was Newcastle United in 1995.

Meanwhile, the Reds added another trophy to the cabinet by defeating Flamengo 1-0 after extra-time in the Fifa Club World Cup final. Having won just one trophy this decade before 2019, they have picked up three in this calendar year alone. More will surely follow.

Roberto Firmino, who scored the winner on Saturday, is the first and only Liverpool player to score in a Club World Cup final. It was also the first time he has scored in consecutive games for the club since January, having scored the winner in the semi-final against Monterrey as well.

Jamie Vardy’s having a party

The former England international’s run of scoring in eight consecutive league matches may have come to an end last week against Norwich City, but Jamie Vardy did find the net against Manchester City on Saturday evening. It was his 17th goal of the current campaign and his 29th of the calendar year – six more than any other player in both categories, and he’s about to turn 33 years of age.

Vardy is the top scorer against City since Pep Guardiola joined the club with six goals. He’s two ahead of Mo Salah, Heung-Min Son and Lionel Messi. The only Premier League teams he has scored more goals against are Liverpool (7) and Arsenal (9).

*Maddison on the ball*

As Daniel Storey tweeted, Vardy is also just one goal away from becoming the fifth highest goalscorer of the Premier League of the 2010’s, despite only making his debut in August 2014. Considering he started out the decade with Fleetwood Town, that’s incredible.

The bad news for Leicester City is that they ultimately lost the game 3-1 having taken just two shots on target. This match was also the most shots on target (11) they have conceded in a single game this season, two more than they conceded in the 2-1 defeat to Liverpool on October 5.

Home comforts at last for Watford

It only took them until November, but Watford beat Manchester United 2-0 on Sunday for their first home win of the season. It was the first time the Hornets have won in the league since April 20, when they beat Huddersfield 2-1 at the John Smith’s Stadium. Their last home win was way back on April 2, when they defeated Fulham 4-1 at Vicarage Road. Both clubs were relegated to the Championship at the end of last season.

It was also the first time Watford have been leading a game in front of their own fans, but more remarkably, the United game was Troy Deeney’s fourth home appearance of the season and each of one them have been for a different manager: Javi Gracia, versus Brighton; Quique Sánchez Flores, versus Burnley; caretaker manager Hayden Mullins, versus Crystal Palace; and Nigel Pearson, versus Man United.

Watford had only scored once in the previous five matches, which illustrates just how shocking a result this was for the visitors. It also paints a picture of how the season has been progressing for United, especially since we’re at the midway point now; Ole Gunnar Solskjaer’s charges are unbeaten against the seven teams above them, gaining 15 points from seven games, while they have just two wins against the 12 teams below them, gaining 11 points. Both wins against the ‘lesser’ teams came versus Norwich City and Brighton.

Is this a result of a lack of creative spark to unlock more defensive sides, a lack of effort when they aren’t playing the so-called big teams, or both?

Home comforts at last for Jesus, too!

Manchester City got a vital win against Leicester on Saturday evening, and they looked back to their best doing it too. Pep Guardiola’s side pelted the visitors with 23 shots, while restricting them to five at the other end.

When the starting line-ups were revealed, it looked as if Jamie Vardy would have a field day. It looked that way when the English striker opened the scoring after 22 minutes, but he only had one other chance after that. Vardy didn’t get a single shot off in the second-half as City expertly shut down the Foxes to continue their record of never losing consecutive home matches under Guardiola.

Gabriel Jesus now has as many goals at the Etihad this season as Marcus Rashford (1).

It was a great night for Gabriel Jesus as well, as the Brazilian finally scored at the Etihad for the first time this season. Jesus’ last home goal in the league came against Wolves on January 14. All four of the striker’s shots were on target as well, the most of the weekend alongside Riyad Mahrez and Teemu Pukki.

Sheffield United are the real deal

Continuing their impressive form since gaining promotion to the Premier League, Sheffield United beat Brighton with an Oli McBurnie goal at the weekend for their third successive win. Chris Wilder’s outfit, who have three away wins for the season, are unbeaten on the road, having also gotten results at Bournemouth, Everton, Chelsea, Tottenham, West Ham, Wolves and Norwich. The only other team not to lose away from home is Liverpool.

Sheffield United have now gained the same number of Premier League away points in 2019 as Tottenham. They didn't play their first game until August 10.

David McGoldrick can count his lucky stars that the Blades held on for the win, as he missed a glorious chance to double their lead in the second half. The Irishman was clean through on goal after rounding goalkeeper Matt Ryan, but could only direct his shot into the side netting.

The striker has had 15 big chances so far this season and has failed to convert any of them – no player in the top flight has missed more. Will he manage to score a goal by the end of the campaign?

Danny Ings increased his tally for the season to 11 league goals with a brace in the win over Aston Villa. Ten of those strikes have come in the last 12 games, propelling Southampton to three wins out of their last five matches and out of the relegation zone.

The Englishman is like the anti-McGoldrick, putting away eight of the nine big chances he’s had this year. Had it not been for injury, Ings surely would’ve made it at Liverpool.

Much has been made of how much Adama Traore gets fouled these days. Built like an ox and faster than a speeding train, defenders aren’t left with much other choice. The Spanish winger is currently the fourth-most fouled player in the league, drawing 42 fouls in total. The more eye catching statistic is the fact that 25 of those fouls have resulted in yellow cards.