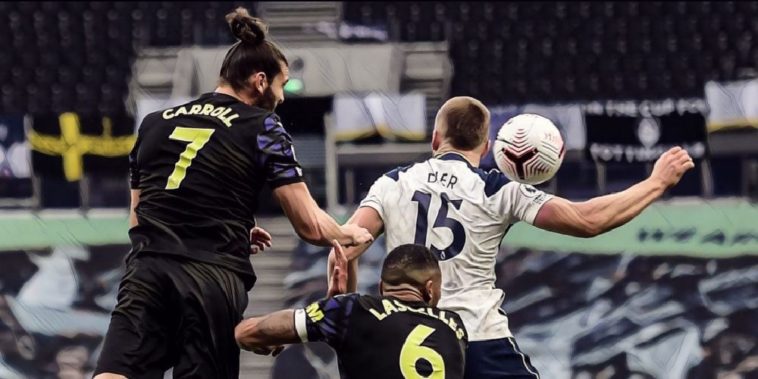 Premier League referees are set to show more leniency in regards to the handball law following the controversy of this weekend’s fixtures, though the incident involving Tottenham’s Eric Dier would still be penalised under the new approach.

This weekend’s fixtures saw outcry after a series of contentious penalty decisions following a strict interpretation of the handball law, with players punished for unintentional handballs when adjudged to have been in an ‘unnatural’ position.

The incidents sparked fierce criticism from managers, players and pundits alike, with Sky Sports’ Jamie Carragher blasting that the new laws were a ‘disgrace’ and are ‘ruining football’.

🎙 – "Whoever is in involved in this – stop it. You're ruining football." @Carra23 is 𝙣𝙤𝙩 happy with the decision to give this as a penalty – your thoughts? 🤔

Premier League authorities have now moved to implement change following the controversy with the Guardian reporting that a more lenient approach will be put into place from this weekend, with referees set to consider ‘whether a player could be expected to have their arms in such a position given the way they were standing, or how they were interacting with opponents’.

The news will be welcomed by frustrated fans and players alike with the hope of a more sensible approach to handballs, though the move away from the black and white laws could yet cause more outcry.

Referees’ interpretation has the potential to cause more confusion and lead to inconsistent decisions, the constant changing of the laws an infuriating talking point in the opening weeks of the new Premier League season.

There have been five penalties awarded for handball already this season, though the new interpretation to the laws mean that decisions such as those against Crystal Palace’s Joel Ward and Manchester United’s Victor Lindelof would not have stood.

The decision to penalise Spurs’ Dier – the ball striking the defender’s arm as he jumped facing away from the play – would still stand, however, given the England international’s hand was raised above his shoulder.

Even though Dier couldn’t see the ball that had been struck from close range, a penalty would still be awarded even with the more lenient approach, the changing interpretation of the game’s laws potentially set to produce even more for controversy.

See also – Fantasy Premier League team of the week for GW3: ‘Penandes’ to the rescue