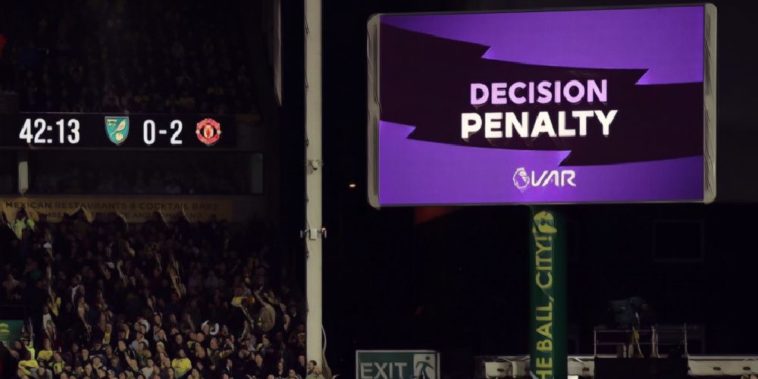 The Premier League’s biggest clubs were most in favour of introducing VAR, according to a report.

The video assistant referee technology has undergone a difficult start to its usage in the Premier League, with fans and pundits having been critical over the lengthy delays in making decisions which often frustratingly leaves supporters left in the dark.

Many have questioned whether the introduction of VAR has indeed benefitted the game, though a report has emerged that suggests the division’s ‘big clubs’ were most in favour of the technology as they felt it would receive the most benefit from correct calls.

“When this was voted on, the big clubs were convinced that VAR would benefit them because of the ‘injustices’ they suffer, but it’s nothing compared to the injustices the smaller teams have suffered for years against those sides, especially at their grounds,” a ‘source’ told The Athletic.

“In the meetings prior, the smaller clubs couldn’t understand why these guys were so adamant VAR would favour them. They told them clearly. It’s just someone else, sat in front of TV screens, reviewing the decisions. Surely they realised there would be calls they wouldn’t agree with?

“Think about it this way: VAR is more likely to chalk off a goal than it is to allow one that has already been chalked off, because finding an infringement is easier than proving the referee has made a mistake. Then consider that bigger teams score more goals than the smaller teams.

“If bigger teams score more goals and there’s more reason to have a goal chalked off than allow one that has already been chalked off, bigger teams will obviously have more complaints.”

Despite the criticism of VAR, the report believes that the technology creates a fairer balance on decisions across the league, and has questioned those who want its usage scrapped and decision’s moved back solely to on-field referees.

“The big teams want referees to go and check the monitors in the hope that, especially in their stadiums, they’ll do so under huge pressure from the crowd,” argues the source. “They don’t want somebody in Stockley Park [the VAR hub] deciding because they can’t intimidate him.

“Even then, they wouldn’t get every decision and they’d moan about that, too. There have been incidents in Italy, for example, where the on-field referee just ends up arguing with the VAR.

“No system takes something from being at a certain level of accuracy to 100 per cent, it’s impossible. What it does is make things better. Are there more correct calls now than before VAR? Yes.

“If people push for it to be suspended, it will be the same people who wanted it in the first place, the same people who always think everything goes against them. We know decisions will go for and against every club with VAR, but on balance it is fairer overall, across the whole league.

“If previously, say, 10 percent of decisions were wrong and now it’s five per cent, that’s an improvement. It was pointed out by a few executives in the meetings that with all the camera angles we’ve been able to look at in recent years, we’ve often spent two weeks discussing decisions after matches. So what makes you think having those angles in front of you live will make it any more clear cut?

“Is VAR spoiling our enjoyment of the game? It’s hard for me to imagine that we should not have the system because somebody’s celebration was spoiled, if indeed it was an illegal goal.”

Read: Carragher explains why he’s no longer a fan of VAR