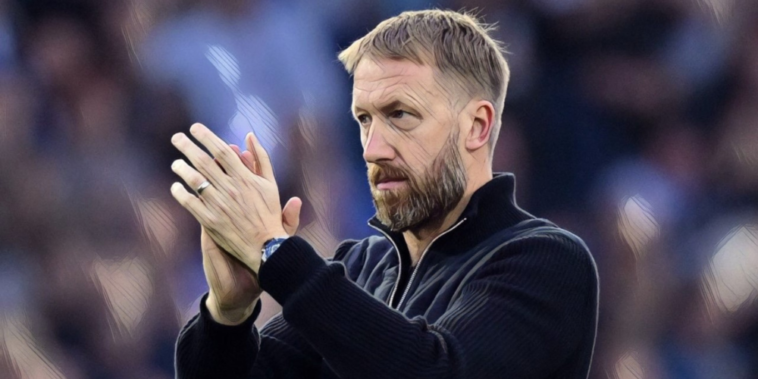 Graham Potter has called on Chelsea to match Arsenal’s intensity as the clubs prepare to meet in a London derby this weekend.

Chelsea host the league leaders in an all-capital clash at Stamford Bridge, with the west Londoners looking to bounce back from a first defeat under Potter at Brighton last weekend.

Arsenal have impressed this season to top the division, following the Gunners’ best ever start to a Premier League campaign. Potter has warned that his team must match the visitor’s intensity if Chelsea are to emerge with a positive result.

“Very [important we match their intensity]. If you don’t do that in any game, it will be a challenge for us,” Potter said at his pre-match press conference. “It was a unique situation at the weekend. Now we have to learn from that and be ready for a London derby.

“A special game, an exciting game. We have to be ready to play the football that can get us a result.”

Chelsea have endured a wretched recent record against Arsenal, having won just one of the last six meetings across all competitions, losing four. Potter is looking forward to his first experience of the fixture however, and is hopeful the home crowd can prove an advantage for his side.

“I think recently it hasn’t gone so well unless I’m mistaken. So we have to do better there, that’s for sure,” he said.

“It’s a London derby and anything can happen in the game. It’s that type of occasion.

“We want to be positive, play well, be on the front foot and get the crowd involved in the game. They’re our 12th player and that’s important for us.”

Asked about Arsenal’s development under Mikel Arteta, Potter said: “They’ve recruited well in the summer. [Oleksandr] Zinchenko and Gabriel Jesus know what you need to do to win and they’ve also carried on their idea. It’s a really good example of how success can come.

“He’s had to face some pressure from the outside, but the club have stayed supportive and stuck to their ideas.

“The younger players have got more game-time and become more experienced. And as I’ve said before, generally the coaching experience becomes the more you’re working. So it’s a combination of hard work from their perspective, sticking with their ideas, support from around, and good recruitment.”