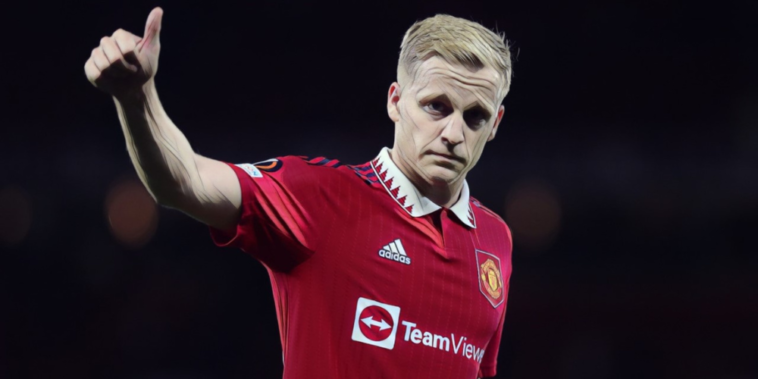 Van de Beek has struggled to make an impact at Manchester United since his £35m arrival from Ajax in 2020, with the 25-year-old having made just four Premier League starts for the club.

The Netherlands international made his first start of the season during the 1-0 win at Real Sociedad on Thursday evening, but failed to make an impact in the Europa League clash. It was Van de Beek’s first start for 11 months, with the midfielder sent on loan to Everton across the second half of last season.

Van de Beek shone under the management of Ten Hag at Ajax and the United boss remains confident that his compatriot can contribute this season.

“I can only talk about my time here and in my time here, he is performing well in the game time we have given him,” said Ten Hag ahead of this weekend’s clash with Aston Villa.

“I know he can do better because I know him very well, but he delivered what I expected on Thursday in terms of positioning and also pressing, in terms of transition. I think he can do more and his biggest quality is that he can be more of a threat to the opponents’ goal.”

Ten Hag admits a decision will be made on Van de Beek’s future if he remains a peripheral part of the club’s plans, but is keen to give the midfielder time to impress.

“Yes, there will come a time, but that can’t be now because he had quite a good pre-season,” he said. “He got injured, now he’s back. Last week he came and I think he played very well, 50 minutes, and I think this game [Real Sociedad] was a decent performance.”

Van de Beek discussed his own future earlier in the week and said that he is determined to put his fitness problems behind him and earn a regular role.

“It’s how I can maybe help the team, playing in between the lines and making my runs with the ball, giving some passes,” he said.

“To be injured is the most difficult thing for a player. You want to be on the pitch, around the guys and, yeah, it’s hard if you’re injured. I’m happy to be back and I have to stay fit for a longer time.”