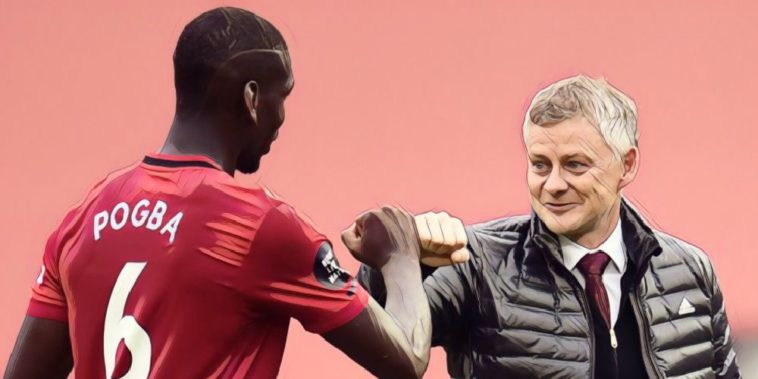 Mino Raiola has confirmed that Paul Pogba is set to commit his future to Manchester United this summer, with contract talks imminent.

The Frenchman has been a divisive figure since he completed his £89 million return to Old Trafford, and while his supreme midfield talents have never been in doubt, his commitment to the club certainly has.

Manchester United fans witnessed a fractious relationship develop between Pogba and former boss Jose Mourinho, and despite seemingly being given a new lease of life following the appointment of Ole Gunnar Solskjaer in December 2018, fans turned on Pogba at the end of last season, before he went on to publicly say that he was potentially seeking ‘a new challenge somewhere else‘.

United refused to do business over their prized asset despite interest from Real Madrid and Juventus, with Pogba going on to endure an injury-hit campaign, making just eight appearances before football’s enforced shutdown due to series of persistent ankle injuries.

He returned to a side in June that had been buoyed by the January addition of Bruno Fernandes, the pair answering the questions of whether they could play together with a number of impressive performances as United secured a third placed Premier League finish, and now his agent, Mino Raiola, has confirmed his client will stay at the club beyond this summer, and open talks over a new deal imminently.

Paul Pogba's reaction after a fan shouts abuse at him ?? pic.twitter.com/StUNVkzs4g

“Pogba is key player for Man Utd, they’ve an important project and he’s 100% included. Man Utd will not accept any bid on this summer to sell Pogba.

“We’re going to speak about a new contract soon, no stress.”

Pogba has one year remaining on his current deal at Old Trafford, although United do have the option to extend the five year deal he signed in 2016 by a further year. Earlier this season Raiola had seemingly been agitating his client for a move away from the club this summer, with the Dutch agent becoming involved in a public war of words with Solskjaer over the 27-year-old.

However, with football’s finances chronically hit by the ongoing pandemic, the list of potential suitors for Pogba has dried up, and recent reports have suggested that the World Cup winning midfielder is now happier at United than at any other time since his move from Juventus.