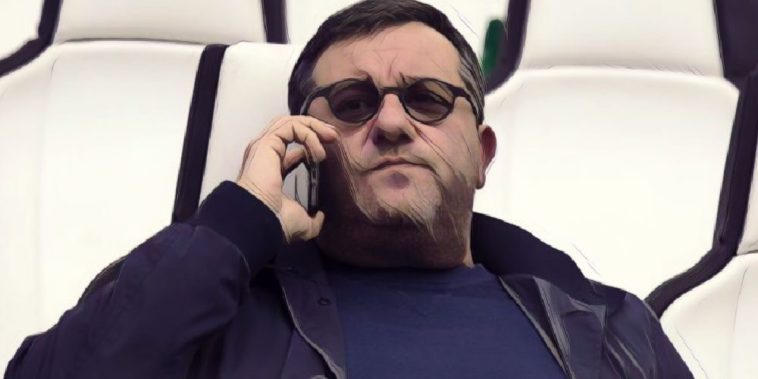 Mino Raiola has embarked on a war of words with Ole Gunnar Solskjaer over the future of Manchester United midfielder Paul Pogba.

Pogba has made just eight appearances in all competitions this season as he continues to struggle with an ankle injury, though that has not stopped the France international from continuing to dominate gossip columns amid speculation he will look to leave Old Trafford this summer.

Controversial super-agent Raiola added fuel to the fire this week by suggesting that the 26-year-old would be open to a return to Juventus, prompting a response from Solskjaer ahead of the club’s 2-0 victory over Chelsea on Monday night.

“Paul is our player and not Mino’s,” Solskjaer said at his pre-match press conference.

“I haven’t sat down and told Paul to tell his agent what to say. I’ve not spoken to Mino, that’s for sure.”

Solskjaer’s comments led to a bizarre and public attack from Raiola on social media, the 52-year-old opening a war of words with the United boss by insisting his client is not the Norwegian’s ‘property’.

“Paul is not mine and for sure not Solskjaer’s property, Paul is Paul Pogba’s…,” Raiola wrote on Instagram.

“BUT BEFORE Solskjaer makes comments about things I say he should inform himself better about the content of what has been said. ⠀

“I am a free citizen who can think and express my thoughts. Until now I was maybe to nice to him. Solskjaer should just remember things that he said in the summer to Paul. ⠀

“I think Solskjaer may be frustrated for different reasons and is now mixing up some issues.

“I think that Solskjaer has other things to worry about. AT LEAST IF I WAS HIM I WOULD.”

Following the criticism Solskjaer would refuse to be drawn into the back-and-forth with Raiola, insisting any response he has for the agent can be conducted away from the media spotlight.

“I don’t have to comment through the media on Mino and what he has to say, I can probably speak to him myself but I probably won’t,” Ole Gunnar Solskjaer told Sky Sports after United’s win at Chelsea.

“Everyone has a voice and an opinion and there’s things being said about us (Manchester United) that you want to comment on but it’s more clever if you don’t.

“Paul (Pogba) and Mino have their conversations and that’s fine.”

Speaking to the BBC, Solskjaer also said: “Paul Pogba is due back in training tomorrow so let’s see where he’s at.”