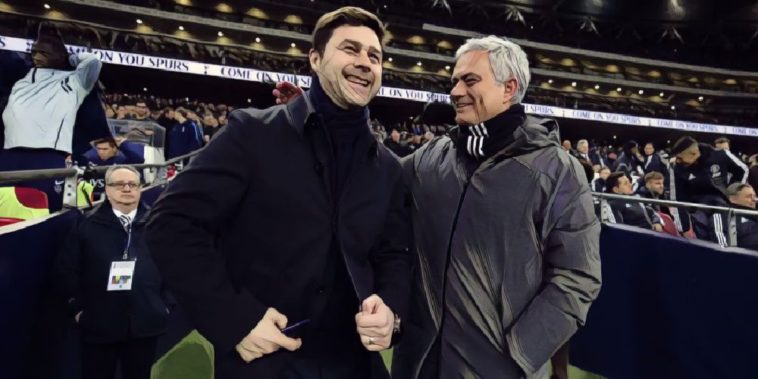 Mauricio Pochettino has described Jose Mourinho as a ‘good friend’ and is hopeful his successor can guide former club Tottenham to the Premier League title.

Pochettino spent five-and-a-half years with the north London side and established the club as title challengers and regulars on the Champions League stage during his tenure, though was sacked last November following a poor start to last season.

The Argentine’s dismissal was considered a surprise by many and came just six months after leading Spurs to a maiden Champions League final, with Pochettino having spoken of his ‘disappointment’ at the club’s decision to head in a new direction under Mourinho.

“After one year now, I’m not going to say I was not disappointed,” Pochettino told Sky Sports Monday Night Football.

“I was a bit upset and was not happy when we left a club that you feel after five-and-a-half years the relationship is massive with the staff, players and of course the fans. I’m not going to lie.

“But I understand football very well and the stadium maybe in our period, in the chapter, that maybe the club needed to change. But I’m not going to complain at the decision of the club.”

Pochettino insists he retains a ‘good relationship’ with Tottenham and has monitored the club’s progress since his departure, Mourinho’s side currently third in the Premier League following a free-scoring start to the season with the likes of Harry Kane and Son Heung-Min in fine form.

Their former manager has spoken of his admiration for Mourinho and has revealed he has a strong relationship with his successor following their respective time in Spanish football, admitting he wishes nothing but the ‘best’ for the Portuguese and remains hopeful Mourinho can guide the club to a long-awaited league title success.

“What I can do is support because I will still have a very good relationship (with the club) and the guy who replaced me was a good friend,” he added.

“He always treated me very good when I was at Espanyol and he was at Real Madrid. And I always remember going to watch a Champions League game of his at Ajax and we chatted before the match.

“Someone had to tell him ‘Jose, we need to go out to the match the game is starting’. And he said, ‘Sorry, sorry’.

“I love Tottenham and I know Jose and I want then best for him and the best way is (for him) to try to win. We missed (the chance) to win a title. That would have put the cherry on the cake.”

Read – Does Bale make the list? Ranking the five players with longest gaps between PL goals