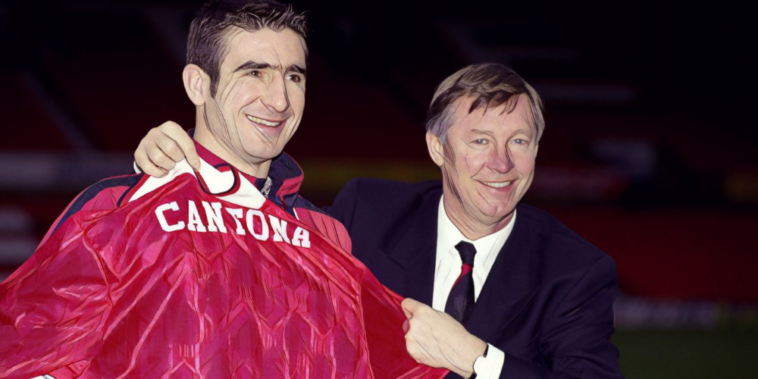 There is a fine line between contenders and champions, with successful recruitment often proving the difference between the two. Sometimes aspirants have to find the last piece of the jigsaw before they can solve the Premier League puzzle.

Chelsea’s signing of Romelu Lukaku may tip the balance of power in The Blues favour this season. A prolific goalscorer for Inter Milan in recent campaigns, the Belgian international is the perfect tonic for The Pensioners’ woes.

Despite boasting the second-best defensive record in the Premier League last season, goalscoring was Chelsea’s Achilles heel. Top-scorer Jorginho managed just seven – all penalties. Lukaku, who netted 24 times in Serie A last term, should provide the goals that Thomas Tuchel’s side have so sorely missed.

In light of his signing, we take a look back at five Premier League players who transformed title contenders into champions.

Cantona’s surprise move from Leeds to fierce rivals Man Utd in 1992 proved to be the genesis of The Red Devils’ domination of the early Premier League era. Arguably the most impactful signing in the history of the division, the beguiling Frenchman made a profound and lasting impression on English football culture.

United had been pipped to the First Division title by Leeds the previous season, with the enigmatic Cantona scoring a number of crucial goals in the run-in. The flamboyant forward began the 1992/93 season in fine fettle, bagging a hat trick in a 5-0 demolition of Tottenham Hotspur – the first hat trick scored since the Premier League rebrand.

Dropped by Leeds manager Howard Wilkinson in November, Cantona submitted a transfer request – with Arsenal, Liverpool or United his preferred destinations. Sir Alex Ferguson’s side, who sat in mid-table, had been misfiring all season. Desperately in need of a creative spark, the Scot took a punt on the erratic Frenchman.

16 – Eric Cantona provided the most assists in the 1992-93 Premier League season, and was one of just three players to provide double figures for both goals and assists in the campaign (along with @mattletiss7 and Brian Deane). Looking. #OptaPLSeasons pic.twitter.com/7npDDAz9u0

The ostentatious attacker, sporting his signature upturned collar, revelled in the spotlight and became an instant hit with the Old Trafford faithful. Registering 9 goals and 11 assists in 22 league appearances, together with Mark Hughes, Cantona fired The Red Devils to their first league title in 26 years.

In the early 90s local Lancashire businessman Jack Walker had the lofty dream of transforming Rovers from a small-town club into a Premier League powerhouse. Having bankrolled a title push – including breaking the British transfer record by spending £3.3m on Southampton’s Alan Shearer – Rovers fell just short in 1993/94, finishing second to a dominant Manchester United.

Blackburn, who relied heavily on Shearer’s goals, were massively outgunned by The Red Devils. That summer, Rovers chairman Walker entered the transfer market in search of a strike partner for his star man.

With 25 league goals to his name the previous campaign, 21-year-old Norwich City striker Sutton was manager Kenny Dalglish’s number one target. Rovers acted swiftly to secure his signature – forking out a fee of £5m and in doing so, breaking the British transfer record once again.

It proved to be money well spent. Sutton and Shearer developed an instant rapport, with the former netting 15 league goals and the latter bagging an astounding 34. Fondly referred to as ‘SAS’, the dynamic duo helped Rovers become unlikely champions – clinching the Lancashire club’s first top-flight title since 1914.

While Shearer (the league’s top-scorer) was undoubtedly Blackburn’s key player that season, Sutton provided the extra yard that edged Rovers across the finish line.

A City icon whose goals delivered the club’s most coveted prize, Aguero’s debut season at the Etihad is among the most spectacular you’re ever likely to see. In the great pantheon of title-winning players, few can claim such direct input into their team’s ultimate triumph.

Aspiring super-club City had been desperate to secure their inaugural Premier League title, but hadn’t been able to break Chelsea and Man Utd’s stranglehold over the crown. In 2010/11 Roberto Mancini’s side had the joint best defence in the league, but had struggled for goals – with Carlos Tevez the only player reaching double figures.

Mancini set his sights on a new striker that summer.

Having forged a formidable partnership with Diego Forlán at Atlético Madrid over five fruitful seasons in La Liga, Aguero was top of the City manager’s shopping list.

The diminutive striker had managed 20 league goals during the 2010/11 campaign and was attracting interest from Real Madrid and Juventus.

City acted first, shelling out a club record £38m to land the 23-year old – eclipsing the £32.5m paid for Robinho in 2008. In retrospect, it’s amazing how little City had to pay and how few competitors there were for his signature.

Agüero bagged 23 league goals for City as they narrowly pipped fierce rivals United to the title on an enthralling last day of the season. THAT goal against QPR, the strike that earned Agüero a place in City folklore, fired the club to their first top-flight title since 1968. The breathtaking stoppage-time strike ranks among the most dramatic moments in Premier League history.

With Chelsea finishing outside the top two in the Premier League for three successive seasons, the period between 2011-2014 represented the first significant trough in the Abramovich era.

Serial winner José Mourinho had been reinstated to steady the ship in 2013, but the Portuguese found his side’s progress hampered by the lack of a prolific goalscorer.

In his first season back at Stamford Bridge, The Blues managed just 71 goals – 31 fewer than champions Manchester City – with the misfiring Samuel Eto’o, Fernando Torres and Demba Ba managing just 19 goals between them.

Mourinho made the addition of a “killer” striker his top priority.

Having scored 36 goals in 52 games for Atlético Madrid the previous season, naturalised Spanish striker Diego Costa was the outstanding candidate in Europe. An uncompromising battering ram of striker, he was well-equipped to deal with the physical demands of English football.

The Spain international hit the ground running, scoring more goals – seven – in his first four Premier League games than any player before him. Costa went on to score a total of 20 goals as The Blues clinched the 2014/15 title – leading Mourinho to declare him “one of the greatest strikers in the world.”

Having replaced Brendan Rogers at the helm in 2015, Jurgen Klopp endeared himself to Premier League audiences with his unique brand of ‘heavy metal’ football.

Despite the broad acclaim, the German’s style had its pitfalls. Potent though The Reds attacking play was, their defending left much to be desired.

The Reds plunged into the transfer market in search of a defensive linchpin, with Klopp’s preferred target being van Dijk. The Netherlands international had been expected to join the Reds in the summer of 2017, but the move fell through after an alleged illegal approach for the 26-year-old.

The Reds cooled their interest, but returned in late 2017 to land the defender in a club-record £75m deal. Sceptics baulked at the mouthwatering fee, but the Dutchman quickly assuaged any fears with a string of commanding performances.

In his first full season with the club, Liverpool boasted the best defensive record in the Premier League – conceding 22 goals and losing just once – as City beat the Merseysiders to top spot by the narrowest of margins.

Van Dijk’s performances were recognised, however, as he became just the third defender to win the PFA Player of the Year award in the Premier League era, whilst finishing as runner-up for the Ballon d’Or following Liverpool’s success in the Champions League.

The Reds bounced back from their title disappointment the following campaign, cruising to their first title in 30 years by a whopping 18 points. With van Dijk at his imperious best, Klopp’s side had the best defensive record in the division for the second successive season.