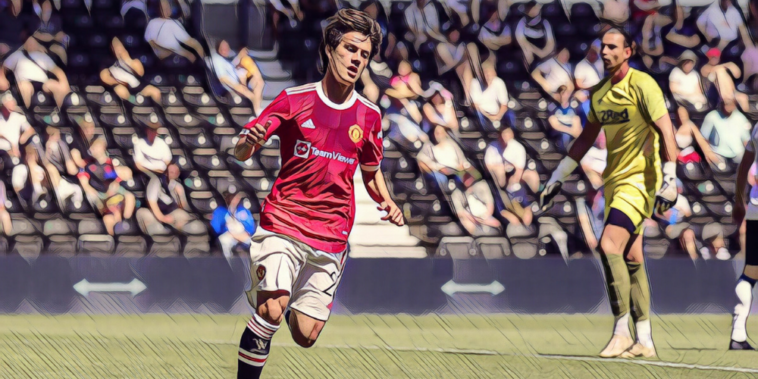 Facundo Pellistri is keen to fight for his place at Manchester United, though Ole Gunnar Solskjaer has suggested a loan move may be in the best interests of the promising winger.

Pellistri signed for the Red Devils from Peñarol in a deal worth a reported €10m last summer, spending the first half of last season with the club’s development side before joining Alaves on loan during the winter window.

The 19-year-old was handed his maiden appearance for the first team during United’s 2-1 pre-season friendly victory over Derby on Sunday, coming off the bench to produce an impressive cameo, including scoring his side’s second after showing composure to round the goalkeeper.

The youngster spoke following the clash about his hopes for the new season and reiterated his desire to remain in Manchester and compete for a first-team place.

“I would like to stay here but I’m still working hard, improving and continue working.

“There is a lot of young talent, all the guys want to improve, the training is really hard and I’m very happy with that because young guys are trying their best and looking for a place in the first team.”

United are currently well-stocked in wide positions with the likes of Marcus Rashford, Mason Greenwood and Daniel James set to be joined by marquee summer signing Jadon Sancho for the forthcoming campaign, and Solskjaer believes another temporary move is best for Pellistri amid interest from several sides in the Uruguayan’s services.

“I can see a loan deal for him,” Solskjaer admitted. “There’s been loads of interest and for his best interests a loan would be what we look for.”