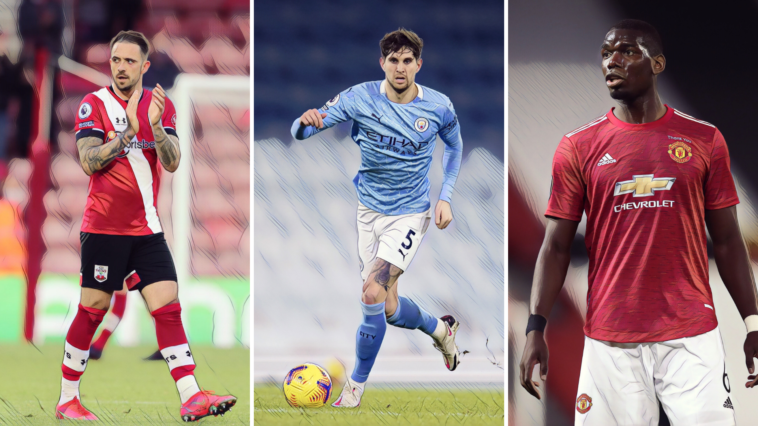 The transfer window is open and as attentions centre around summer signings for Premier League clubs, a host of leading names face uncertain futures after entering the final year of their deals.

This summer has already seen names such as Georginio Wijnaldum and Sergio Aguero secure free transfer moves and this list of players will certainly attract interest in 2022 if their contracts are not renewed in the coming months.

The leading Premier League player available for nothing next summer, Paul Pogba’s future at Manchester United appears as unclear as ever.

The France international has routinely been linked with a move away from the club over the past two seasons, with Real Madrid, Paris Saint-Germain and former club Juventus amongst his list of admirers.

Pogba’s agent, Mino Raiola, claimed late last year that the midfielder’s future with the Red Devils was ‘over’, though the 28-year-old subsequently played a prominent role over the second half of the season as United finished as Premier League runners-up.

United are keen to extend his contract with a bumper new deal, though recent reports have suggested that Pogba is prepared to wait and will weigh up the club’s offer and progress alongside any interest from elsewhere.

Losing the midfielder on a free transfer would be a huge blow for Ole Gunnar Solskjaer, who will want Pogba’s future sorted as soon as possible to avoid a potentially disruptive distraction next term.

Alexandre Lacazette is another player who has entered the final 12 months of his deal and reports have suggested that Arsenal have offered the services of the forward to a host of clubs this summer.

Mikel Arteta is keen to rebuild his squad and the Gunners are believed to be keen to remove the former record signing from the wage bill, despite Lacazette finishing as the north London side’s leading scorer with 17 goals in all competitions last season.

Arteta has previously praised the contribution of the 30-year-old who has scored 50 league goals in 128 appearances since signing from Lyon, but now may be the final chance to receive a fee for a player who looks unlikely to earn a new contract.

With youngsters Gabriel Martinelli and Folarin Balogun supporting club captain Pierre-Emerick Aubameyang, Arsenal may cash in on Lacazette if a suitor can be found.

Southampton face a major decision on the future of Danny Ings after the forward turned down a new four-year contract that would have made him the club’s highest-paid player.

Ings is out of contract next summer and attracting interest form further up the Premier League, with reports this week that Tottenham had made the 28-year-old their number one transfer target as new manager Nuno Espirito Santo seeks a partner for Harry Kane.

Manchester City and Manchester United have also been credited with interest in the England international, who has scored 41 league goals in 91 appearances since signing for the Saints from Liverpool.

Having endured a frustrating time with injury on Merseyside, Ings appears to have set his sights on a return to one of the Premier League’s elite.

Jannick Vestergaard is another player whose contract situation will need to be sorted before next summer, with the Denmark international having been linked with Roma and Tottenham.

Antonio Rudiger had looked destined for a Chelsea exit last summer, the defender having fallen out of favour with former manager Frank Lampard and linked with Tottenham and PSG.

Thomas Tuchel’s arrival in January has since seen the Germany international flourish under his compatriot, starring in a three-man backline as Chelsea’s improved showings led to Champions League success.

Rudiger reportedly rejected the chance to extend his contract in order to focus on Euro 2020, but the conclusion of the tournament should see talks begins as the Blues bid to secure the 28-year-old’s signing.

Andreas Christensen – who impressed for Denmark at Euro 2020 – is also out of contract next summer, alongside fellow defenders Emerson Palmieri and Cesar Azpilicueta.

Jesse Lingard’s renaissance last season was one of the feel-good stories of the Premier League campaign, the midfielder thriving during a loan spell at West Ham following a frustrating period on the sidelines at Manchester United.

Lingard scored nine goals and provided four assists in just 16 league appearances for the Hammers, who are keen to sign the 28-year-old on a permanent basis.

Recent reports have suggested United are holding out for a fee of around £30m for the England international as they bid to raise funds for pursuits of Raphael Varane and Eduardo Camavinga, though that figure appears ambitious given Lingard’s age and contract situation.

Rodriguez’s arrival was viewed as a huge coup for the Toffees, but after an initial bright start the midfielder faded following persistent injury problems and was left out of Colombia’s Copa America squad amid fitness concerns.

New manager Rafael Benitez was coy when questioned on the player’s future at his unveiling, though did suggest players on ‘big salaries’ and not playing could be moved on as the club look to comply with Financial Fair Play regulations.

Another player who enjoyed a huge upturn in fortunes last season, John Stones started the season as Manchester City’s fifth-choice centre-back before returning to the side to star as the Premier League title was secured.

Stones enjoyed an outstanding season to be named in the PFA Team of the Year, winning a third league title in four seasons and regaining his place in the England side, forming part of the Three Lions team that finished runners-up at Euro 2020.

The initial six-year contract Stones signed when joining from Everton is set to expire next summer, though there are predicted to be few complications in securing a renewal following the 27-year-old’s return to form and prominence.

Could this be the summer that James Tarkowski departs Burnley?

The defender has been a fine servant to the Clarets since signing from Brentford in 2016, forming an excellent partnership with Ben Mee as Burnley have consolidated in the Premier League.

The 28-year-old has won two caps for England and has previously been linked with Leicester, Wolves and West Ham, with the former reportedly remaining interested in his signing as David Moyes looks to strengthen his options at centre-back.

Burnley rejected several bids from West Ham for Tarkowski last summer, the last believed to be in the region of £31m, and may now be forced to accept a significantly lower offer or risk losing the player for free next summer.

Sean Dyche has indicated he would be prepared to run that risk, though a sale now could free up vital funds with the Clarets linked with Liverpool defender Nat Phillips.