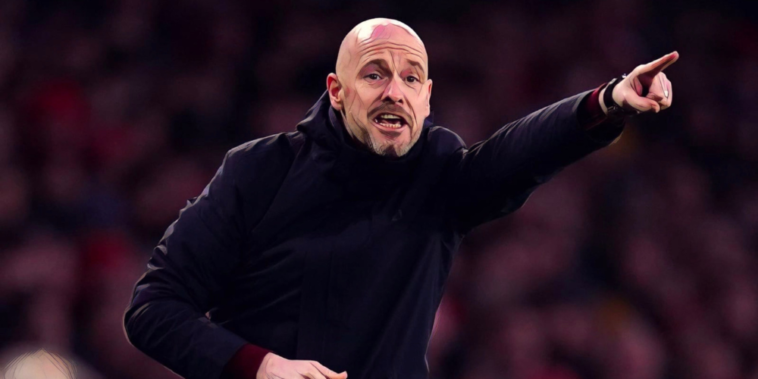 Erik ten Hag has called on Manchester United to change their mentality after the club’s late defeat at Arsenal.

United’s hopes of a top four finish suffered a setback after a 3-2 defeat at Arsenal on Sunday, with Eddie Nketiah’s 90th-minute winner condemning the Red Devils to a first defeat in 11 games in north London.

Marcus Rashford had fired the visitors into a first-half lead at the Emirates with a fierce strike, but Arsenal bounced back to level through Nketiah’s first goal. Bukayo Saka’s fine effort from distance put Arsenal ahead in an entertaining encounter, before Lisandro Martinez’s stooping header levelled the scores once again.

Arsenal upped the pressure in the closing stages and found a late breakthrough, as Nketiah flicked home a dramatic last-gasp winner to spark wild celebrations.

Ten Hag was critical of his side’s defending and insists improvements must be made if United are to compete for trophies and titles.

“It was like a pack of cards with the goals we conceded,” he said at his post match press conference. “We made mistakes, we didn’t show discipline, and then you will concede goals.

“I told the players that if you want to win trophies, titles, you have to change the mentality.

“It’s not possible, in a top [level] game, that you make three such big mistakes. Especially the last goal. You have to feel the game. A point was the [minimum] you have to take. You can’t give such a goal away like we did, at the top level, and win trophies.”