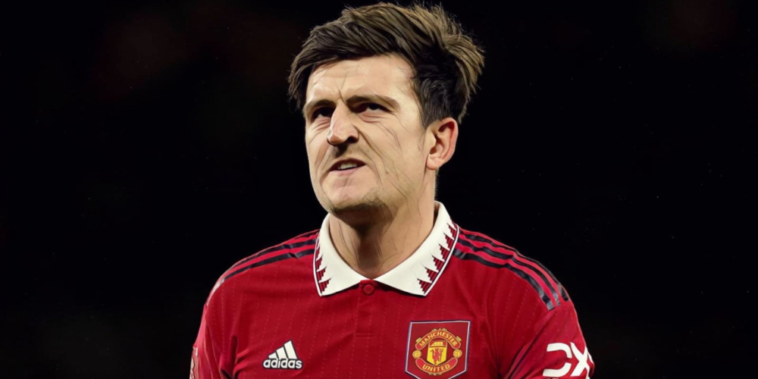 Much of our time is often devoted to the Premier League stars lighting up the league, those producing performances on a consistent basis and taking their careers to new heights.

But was about those on the opposite end of the spectrum? This season there have been several stars struggling to reach the expected standard, with faltering form having plagued some of English football’s big names.

Harry Maguire’s career is at a crossroads with the defender out of form and out of favour at Manchester United.

Maguire’s role has been reduced to bit-part player since United began the season with disasters against Brighton and Brentford, starting just two league game since those early season defeats. The 29-year-old featured prominently for England at the World Cup in what appeared to be a lifeline to his loss of confidence, but he has returned to peripheral status since returning to Old Trafford.

Despite retaining the captaincy, Maguire has effectively fallen to fifth-choice centre-back with Erik ten Hag having preferred to use Luke Shaw in an unfamiliar central defensive role in recent fixtures.

For a defender who remains the most expensive in football history it has been a rapid fall from grace, with each poor performance scrutinised to an extent that has seen Maguire, perhaps unfairly, become a comical caricature of himself.

West Ham have been linked with a move to sign Maguire on loan this month, though it has been suggested that the defender is keen to fight for his place at United. Even given the recent renaissance of Aaron Wan-Bissaka from his own period of exile, it’s difficult to see how Maguire can salvage his stalling fortunes at the club.

Where does he go from here? Not back into the Manchester United side if the early tenure of Ten Hag is anything to go by.

Chelsea have endured a nightmare season to date and are tenth in the Premier League table, with the west Londoners having opted to throw money at the problem in a desperate bid for improvement.

While investment is necessary, splashing the cash in large sums has not always gone to plan for the Blues. Kai Havertz has failed to live up to expectations since his high-profile £72m arrival from Bayer Leverkusen and has struggled during a difficult season in west London.

Havertz has shown just flashes of the talent that saw him emerge as one of Europe’s most coveted young talents, with the question marks remaining over his role and best position. Too often the German has flattered to deceive in a Chelsea shirt and the credit he earned from his Champions League final winner in 2021 is beginning to dwindle.

Tough times call for togetherness. We're as frustrated as all the fans with the way things are going at the moment. We'll continue to work on ourselves and improve with everyday! COYB 💙 pic.twitter.com/AdYJYAAYEw

The 23-year-old is into his third season in the Premier League and has scored just 17 league goals for Chelsea, the same total he managed for Leverkusen during the 2018/19 Bundesliga season alone.

Three different managers have tried and failed to bring the best from Havertz on a consistent basis, who for all his talent has been a frustrating hybrid of multiple positions – none of which have appeared the right fit.

Chelsea are in the process of an overhaul with Mykhaylo Mudryk and Noni Madueke set to join the club’s attacking options and Christopher Nkunku to follow in the summer. That business is perhaps indicative of the lack of impact Havertz has made.

Perhaps no player has epitomised Liverpool’s midfield malaise more than Fabinho, whose form this season has fallen off the cliff.

For so long the protector of Reds’ back four, Liverpool’s ‘lighthouse’ has allowed Jurgen Klopp’s side to navigate increasingly choppy waters in darkness.

Fabinho was hailed as one of the world’s best defensive midfielders during Liverpool’s modern success, but the long legs that regularly thwarted opposition attacks have moved a little heavier this season.

Too often Liverpool’s midfield has been cut through it ease and the crunching challenges of Fabinho have been replaced with a pale imitation of his former self, ambling around Anfield in lethargic fashion.

This is no ageing veteran but a player who should be at the peak of his powers. Still just 29, his drop-off this season has puzzled those on Merseyside.

Son Heung-min was one of the stars of the Premier League season last time around, as the South Korean enjoyed a career-best campaign that ended with a share of the division’s Golden Boot.

Son became the first Asian player to finish as the Premier League’s leading scorer after scoring 23 league goals for Tottenham, but the goals have dried up for the 30-year-old in a challenging campaign to date.

He has just four for the season so far – three of which came with a hat-trick against Leicester in September – and has scored just once across his last 11 league games.

It’s a concerning drop in production for Son and one which will have Antonio Conte in search of a solution. Harry Kane aside, the club’s attacking options have failed to deliver this season.

Dejan Kulusevski has scored just once since the opening weekend, while Richarlison is still awaiting his first league goal for the north Londoners after joining from Everton in a deal worth up to £60m last summer.

Jarrod Bowen’s evolution into one of the Premier League’s most effective attacking options saw the West Ham winger make his England debut last summer, capping a rise which began in the humble surroundings of non-league Hereford United.

Bowen was one of just three players – alongside Mohamed Salah and Mason Mount – to record 10+ goals and 10+ assists in the Premier League last season and was linked with Liverpool and Arsenal as ‘Big Six’ clubs considered a move for the hard-working and productive wideman.

This season has been a sharp decline as Bowen has struggled to replicate last season’s performances in a Hammers’ side unable to repeat their own achievements of the last two campaigns. David Moyes’ side are in the relegation places and have recorded just four wins this season, while Bowen has scored just twice in 19 league appearances.

His form saw Bowen left out of England’s World Cup squad and he has fallen down the pecking order for the Three Lions after a period of poor performances.

Hugo Lloris’ form is a huge concern for Tottenham right now with the goalkeeper’s error-prone performances having contributed to a disappointing run of results.

Lloris has made a string of mistakes in recent fixtures. He fumbled a long-range effort during the defeat to Aston Villa on New Year’s Day, before spilling Bukayo Saka’s deflected cross into his own goal during Spurs’ loss to Arsenal last weekend.

🫠 This means since the start of last season, only Everton (13) have committed more errors leading to goals than Tottenham (10) pic.twitter.com/pwXodbxbP7

His poor form continued at Manchester City in midweek with Lloris at fault for two goals as the champions came from behind to beat Antonio Conte’s side at the Etihad. He flapped at a loose ball in the build-up to Julian Alvarez’s goal, before being beaten at his near post as Riyad Mahrez put City ahead and completed the comeback.

Out of contract at the end of the season, now appears the time for change in north London. Lloris has spent more than a decade as the club’s number one, but an upgrade is required if Spurs are to compete at the top level.

Brentford’s David Raya and Everton’s Jordan Pickford have been mooted as potential targets for the summer window.