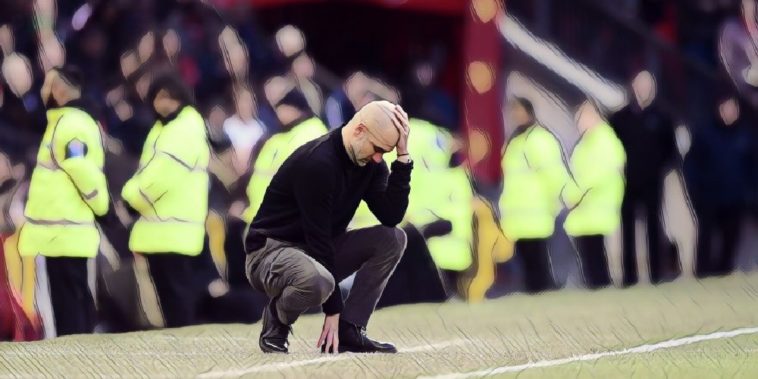 Pep Guardiola’s wait for a first Champions League win at Manchester City has been extended into another season at least, after the Premier League champions collapsed in their semi-final with Real Madrid.

It was a disappointing defeat for The Citizens who were just minutes from a second successive final, whilst defeat for Guardiola handed the Spaniard a new unwanted record.

Guardiola has now suffered six semi-final exits in the competition, a record he now shares with Jose Mourinho after defeat at the Bernabeu.

Following his latest loss, we remember each of Guardiola’s last four exits.

The Spanish side were favourites to defend their crown the following season and enjoyed a comfortable passage to the last four, thrashing Arsenal in the quarter-finals with Lionel Messi scoring four times in a 4-1 win at the Camp Nou.

The last four saw Barcelona take on Inter Milan, having already taken four points from the Nerazzurri during the group stages.

Barcelona were undone in a display of clinical counter-attacking from Inter during the first leg however, as goals from Wesley Sneijder, Maicon and Diego Milito saw Jose Mourinho’s side come from behind to win 3-1 at the San Siro.

Inter Milan were forced to play more than an hour of the second leg with 10 men after Thiago Motta’s red card, but a Mourinho masterclass in defensive discipline ensured a narrow 1-0 defeat and progress for the Italians.

Guardiola crashed out as Mourinho celebrated wildly on the Camp Nou pitch, the latter leading Inter to a first European Cup in 45 years as part of Italian football’s first ever treble.

Barcelona again entered the 2011/12 season as reigning European champions, having beaten Manchester United in a spellbinding final performance at Wembley.

English opposition awaited again in the semi-finals the following season as the Catalans and Guardiola took on Chelsea. Barcelona dominated the possession (72%) and chances at Stamford Bridge, but fell to a 1-0 defeat in the first leg as Didier Drogba scored the game’s only goal.

The return proved an unforgettable clash as Barcelona somehow exited Europe, despite taking a two-goal lead either side of John Terry’s 37th-minute red card for Chelsea.

You know the rest! 😉 pic.twitter.com/zdnCodY9DC

Ramires’ brilliant chip put Chelsea ahead on away goals, before Barcelona wasted a glorious chance to retake the aggregate lead as Lionel Messi crashed a penalty against the crossbar.

The Catalans were unable to break down the 10-men West Londoners across the remainder of the clash, with Fernando Torres late breakaway goal confirming Chelsea’s passage to the final.

Guardiola inherited the reigning European champions after taking over at Bayern Munich in 2013, but his three seasons with the Bavarians all ended in Champions League semi-final exits.

The first of those came at the hands of old foes, as Real Madrid produced a spectacular performance in Germany.

Bayern had been confident of overturning a 1-0 loss in the Spanish capital, but an astonishingly one-sided second leg saw Real win 4-0 at the Allianz Arena and progress to a first final since 2002.

Sergio Ramos scored twice inside the opening 20 minutes to leave the hosts stunned, before Cristiano Ronaldo finished off a counter-attack to make it 3-0 before half-time.

Ronaldo added gloss to the scoreline with a late free-kick, sealing a 4-0 win – and 5-0 aggregate success – for Carlo Ancelotti’s side.

Guardiola came up against his old side in the Champions League for the first time in 2014/15, taking on Barcelona in the semi-finals.

Guardiola’s game-plan appeared to be working for much of the first leg at the Camp Nou, but the brilliance of Lionel Messi turned an even contest into a comfortable win for the Catalans.

The Argentina international lashed home a first goal from the edge of the area on 77 minutes, before scoring a stunning individual effort – leaving Jerome Boateng twisted and on the turf – just three minutes later.

Neymar raced away to score a third goal for Barcelona in stoppage-time and despite a spirited performance from Bayern in the return, winning 3-2 at the Allianz Arena, it was another last four exit for Guardiola.

For the third consecutive season Bayern bowed out in the semi-finals to Spanish opposition, losing on away goals to Atletico Madrid in 2015/16.

Saul Niguez’s sublime solo goal gave Atletico Madrid a 1-0 lead to protect in Germany and the club’s famed defensive strength under Diego Simeone – who was embroiled in a heated touchline dispute with Guardiola – came to the fore.

Bayern levelled the tie through Xabi Alonso’s deflected free-kick before Jan Oblak came to Atletico’s rescue, making a strong save from Thomas Muller’s penalty to keep his side ahead in the tie.

Antoine Griezmann fired in a cool equaliser to score a precious away goal for the visitors, though Robert Lewandowski’s header set up a tense finish as Guardiola’s team pushed for a winner.

It was Atletico who came closest to another goal, but Fernando Torres saw his spot-kick saved by Manuel Neuer. Atletico Madrid held on, booking a rematch of their 2014 final with Real Madrid.

Guardiola’s sixth semi-final exit was perhaps the most painful, as Manchester City snatched defeat from the jaws of victory at Real Madrid.

Whilst the fat lady was not quite signing in the closing stages at the Bernabeu, she was certainly backstage warming up the vocals.

The damage was perhaps done in a first leg that City dominated but came away with just a one-goal advantage, a number of chances squandered – alongside some suspect defending – allowing Real Madrid to escape with only a 4-3 defeat.

Riyad Mahrez’s goal in the return looked to have all but assured City’s place in a second successive final, but Rodrygo’s late double provided a stunning climax to the 90 minutes in Spain.

The Brazilian’s brace forced extra time in the most dramatic of fashion and Karim Benzema’s penalty in the added period sent Real through to another final.

For City and Guardiola their wait for Champions League success is extended, with it now 11 years since the Spaniard last got his hands on club football’s biggest prize.

Read – Four things we learned from the Champions League semi-finals