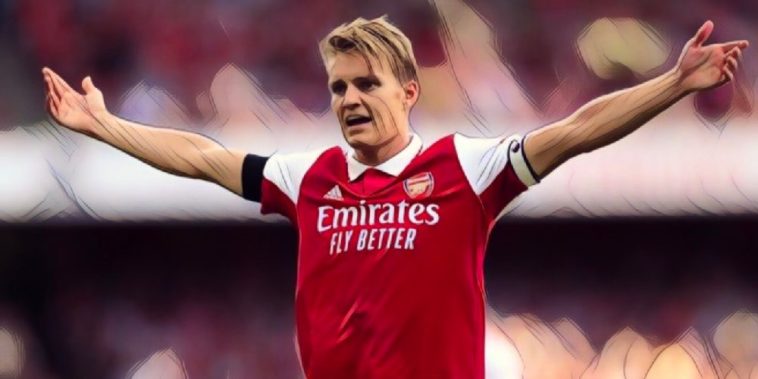 Arsenal remain as the only Premier League side with a 100% record this season after the Gunners secured a 2-1 victory over Fulham at Emirates in today’s late kick-off.

The Gunners had the best chance of the opening period, with former Arsenal ‘keeper Bernd Leno doing well to deny Bukayo Saka after the young England attacker found himself clean through on goal.

Fulham have surprised many fans and pundits with just how impressive they have been since their return to the Premier League and ten minutes into the second half the Cottagers would take the lead through their main man, Aleksandar Mitrovic. It was a horror moment for Arsenal defender Gabriel though, the Brazilian dallied on the ball in his own box which allowed Mitrovic to duly dispossess him and fire past the onrushing Aaron Ramsdale.

Ten minutes later and the brilliant Gunners captain, Martin Odegaard, would spare Gabriel’s blushes when he broke forward and saw his effort from the edge of the area deflect past the hapless Leno.

Mitrovic was a handful all afternoon and it took a superb stop from Ramsdale to keep out the Serbia striker’s bullet header from a corner.

Five minutes before time Arsenal would get their winner, however, with Gabriel bundling home a corner to seal the win and personal redemption after his earlier error.

Speaking afterwards, Odegaard was delighted with his sides showing and discussed the chemistry that this current Arsenal team have built with the Emirates crowd.

“It was brilliant,” he told Sky Sports. ”We knew it was going to be a tough game. We fought, showed great team spirit and it’s an amazing feeling.

“We played really well in the first half, we just missed the goal but that happens. He showed great character to come back and score the winning goal. It shows the character of the team. When someone makes a mistake, we lift them back up.

WE ARE THE ARSENAL! ❤️ pic.twitter.com/aPwLt9Ueve

“We have to stay calm, take it game by game, work hard and win the next game. That’s the mindset.”

“It’s a great chemistry with the fans. We made a mistake with the first goal but they kept supporting us. We’re grateful for all the support we get.”