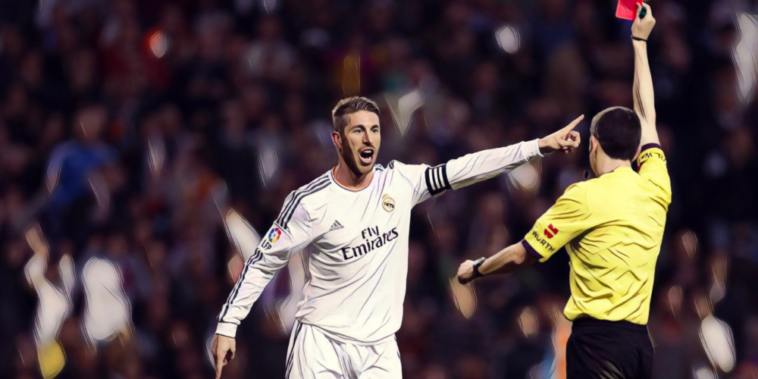 Red cards often follow a red mist for footballers, with referees forced to reach for their pocket when players lose discipline or make crude challenges.

There are a number of reasons players can be dismissed and this famous five certainly developed reputations for receiving red cards. In celebration of football’s bad boys, here are the five footballers to receive most red cards in football history.

The best seasons of Paolo Montero’s career came in Italian football, with the defender no stranger to either major silverware or early baths.

Montero spent four seasons with Atalanta before joining Juventus in 1996, where he won four Serie A titles across a glittering career in Turin.

The Uruguayan was renowned for his no-nonsense approach and received 21 red cards during his career, with no player having ever been sent off on more occasions in Serie A.

He made 278 appearances across nine seasons at Juventus, forming an excellent partnership with Ciro Ferrara as the Bianconeri challenged for domestic and European honours.

The centre-back was named as La Liga’s Breakthrough Player in 2006/07 after an impressive season with Getafe, before moving to Valencia where he won the Copa del Rey in his debut campaign at the Mestalla.

He also had short spells in both Turkey and Saudi Arabia, though his spell with Besiktas ended with accusations of match-fixing following a poor performance in a 3–3 draw against Akhisar Belediyespor.

Cyril Rool took few prisoners on the pitch during a long career in French football, with the combative midfielder collecting cards at an astonishing rate.

His 19 red cards is a record in Ligue 1, with Rool having amassed a huge 25 dismissals across a career that included spells at clubs including Lens, Nice and Marseille.

In addition to his red card collection, he also received a staggering 187 yellows with Rool a regular when it came to the referees’ notebook.

Sergio Ramos has been an unmissable presence in European football across the last two decades, cementing his legend as one of the great defenders of the modern era.

After signing for Real Madrid as a teenager, Ramos spent 16 seasons winning trophies and irking officials at Spanish football’s most successful side.

The centre-back won an incredible five league titles and four Champions League trophies among his major honours, during a career with Los Blancos that brought 671 appearances and 101 goals.

Ramos, unapologetically, has also been the most carded player this century and has received a whopping 27 red cards across the course of his career. From scathing challenges in El Clasico contests to elite levels of shithousery, Ramos reds have been a regular occurrence.

He departed Real Madrid to sign for Paris Saint-Germain on a free transfer in 2021, where he was duly sent off on just his second Ligue 1 appearance. Old habits die hard.

Even Ramos’ red-mist episodes pale in comparison to Gerardo Bedeoya, the former Colombia international who became football’s king of cards.

Nicknamed ‘the beast’, it was a moniker the midfielder lived up to as he scythed down opponents and collected cards at a record rate.

His most notorious moment of madness came in a Bogota derby clash between Independiente Santa Fe and Millonarios in 2012. Bedeoya was given a 15-game suspension after following an elbow at Millonarios player Jhonny Ramirez with a subsequent kick to the head.

The combative, and often a little crazy, Colombian was not one to mess with.