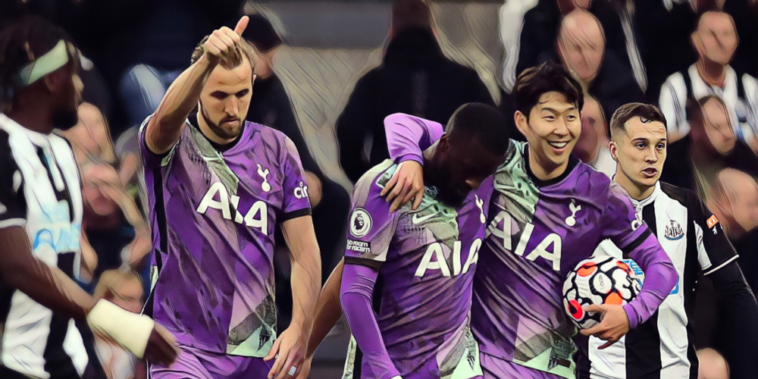 Tottenham Hotspur came from behind to spoil Newcastle’s post-takeover party with a well deserved 3-2 win on Sunday.

The home supporters were in jubilant mood following the club’s recent high profile takeover – which brought an end to the turbulent regime of Mike Ashley – and they were handed even more cause for celebration as the Magpies took the lead inside just two minutes.

All of the talk in the past week has been about potential future incomings at the club, although it is their current stars who will have to do the job until at least January, and it would be Allan Saint-Maximin who found the overlapping run of Javier Manquillo down the right before the full-back crossed to pick out the run of Callum Wilson who nodded Newcastle in front.

After that shaky start, Spurs rallied to pull themselves level just over 15 minutes later, with midfield man Tanguy Ndombele curling in a delightful effort from just outside the box to somewhat dampen the buoyant atmosphere inside St James’ Park.

The visitors then took advantage of any potential nerves from their struggling opponents to make it 2-1 soon after, as Harry Kane ended his Premier League drought with a delightful dinked effort over the onrushing Karl Darlow, with the goal eventually awarded by VAR despite an initial offside call.

The game was then brought to a halt following a medical emergency involving a supporter, before the away side then extended their lead once play had resumed, with goalscorer Kane turning provider to tee up Heung-min Son for a simple tap-in at the back post.

That goal – and the brief suspension to the game – seemingly took the sting out of Steve Bruce’s side, with the second-half failing to replicate the tempo of the opening exchanges, with neither side really creating much in the way of chances.

It then got even worse for home side after substitute Jonjo Shelvey was dismissed for two yellow cards in quick succession, although they were handed a late lifeline after Eric Dier turned into his own net with just minutes remaining.

That proved to be a mere consolation as Nuno Espirito Santo’s men hung on for a deserved win, condemning Newcastle to a first defeat under their new owners – in what was also Bruce’s 1000th match of his managerial career.

Speaking after the victory – which moves the north London club up to fifth – Santo said that he was delighted with his side’s reaction, having conceded so early on in the game.

“It did not start very well, we expected Newcastle to come strong but reacted very well,” he told the BBC. “Then they stopped because of the fan and I have the info that he is OK.

“We knew we had to ignore the noise and do our job. We did not start well but did an amazing job after. Really proud of them.

“I would like to score more, the boys also but Newcastle are a good team with good defenders.

“When the news come and (Covid) results come, it is big confusion but it was false positives. It was a disruption in preparation but we could adapt and the result is here.

“We have to focus on Thursday now, playing away from home with a lot of travelling and that requires and extra effort from us.”

The former Wolverhampton Wanderers boss was also full of praise for main man Kane, after the England captain bagged his first league of the season off the back of a turbulent summer due to persistent transfer speculation.

“It is good for us, good for Harry. What he does for us goes beyond the goals he scores for us.”

Tottenham are next in action away at Vitesse in the Europa Conference League on Thursday, before they take on West Ham United on Sunday.