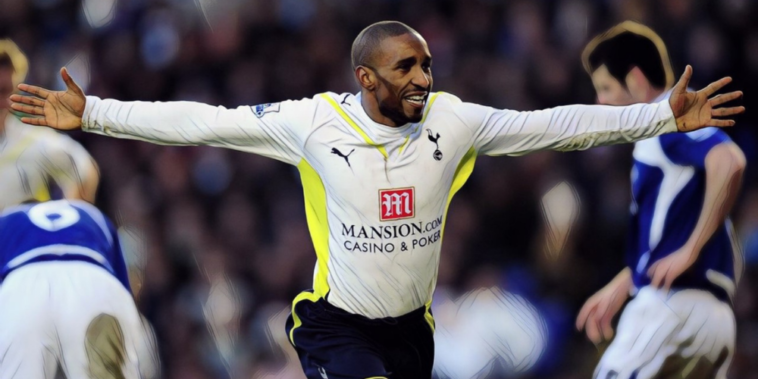 Just eight players have ever scored more Premier League goals than Jermain Defoe. In almost three decades of the rebranded division, Defoe’s knack of finding himself in the right place at the right time has ensured he ranks among elite company.

The former West Ham and Tottenham forward brought down the curtain on his career this week, hanging up the boots that had plundered 305 goals in 764 appearances in senior club football for a final time.

Goals have always been associated with Defoe and it is a craft he has perfected over a storied career, remaining an opportunistic forward from his teenage breakthrough right until his eventual retirement more than two decades later.

Defoe came through the fabled academy system at West Ham, having been prised from London rivals Charlton whilst still a teenager. He had caught the attention of scouts at the infamous amateur side Senrab, known in London for producing players such as Lee Bowyer, Ledley King and John Terry.

He was enrolled into the FA National School of Excellence at Lilleshall as a 14-year-old, before crossing the capital to sign for the Hammers two years later. West Ham’s snaring of the striking starlet cost the club compensation potentially rising to £1.4 million, a small fee given the levels Defoe would reach.

Defoe’s instinctive finishing and drive to educate himself on the art of goalscoring soon captured the attention and a loan spell at Bournemouth in the third tier accelerated his ascent.

Defoe scored 18 goals in 29 league appearances for the Cherries, including equalling a then post-war record by scoring in 10 successive Football League matches.

The teenager broke into the West Ham team during the 2001/02 season, following the example of fellow academy alumni Rio Ferdinand, Frank Lampard, Joe Cole and Michael Carrick in making the step into the senior side.

He finished the campaign as the club’s leading scorer with 14 goals in all competitions despite being used primarily as a substitute, before leading the club’s goal chart for a second successive season in 2002/03.

That season proved a disaster for the Hammers, however, as the club were relegated from the Premier League with 42 points – a tally that has never since been equalled by a relegated side in England’s top division.

West Ham’s newest hero soured relations with the East Londoners in the immediate aftermath, handing in a transfer request – a situation he later expressed his regret at – just 24 hours after the club’s slide into the second tier.

“I felt like I was betraying a family member,” he told Sky Sports Transfer Talk. “These people had given me an opportunity, and then years later I’m going in and handing in a transfer request saying, ‘I don’t want to be here, I want to leave’.”

“I made a big mistake. When I done it and realised what had happened, I felt like I had to get my head down and try to win the fans back.”

Defoe remained with West Ham for a further six months, but was sent off three times across the first half of the season. In January the club accepted a deal worth £7m and the forward’s declining relationship with the Hammers worsened after a move to Tottenham.

Back in the Premier League he continued to enhance his reputation as one of England’s brightest talents, marking his debut with a goal in a 4–3 home win over Portsmouth.

His first full season saw him flourish under Martin Jol to net 22 goals across all competitions, earning an England debut and finishing as Spurs’ leading scorer.

However, the arrivals over the following seasons increased competition for places and Defoe endured a frustrating period, often finding himself as the odd one out to an impressive partnership between Dimitar Berbatov and Robbie Keane.

After three-and-a-half seasons with Spurs he signed for Portsmouth, reuniting with former West Ham manager Harry Redknapp on the South Coast.

He scored eight goals in 12 games after his January arrival, before striking up a strong understanding with Peter Crouch during his second campaign.

Crouch’s towering frame and link-up play complimented the evasive movement and predacious finishing of Defoe, but after just a year at Fratton Park he returned to Spurs – again joining Redknapp after his own move from Portsmouth to North London.

Defoe’s second spell with Spurs lasted six seasons and saw him take his contribution to 143 goals, the sixth-highest total in the club’s history.

That haul included a stunning individual performance as he scored five goals in a 9–1 thrashing of Wigan on 22 November 2009, a feat which featured the third-fastest hat-trick in Premier League history in just seven minutes.

Just five players have ever scored five goals in a Premier League fixture, with Defoe alongside Andy Cole, Alan Shearer, Dimitar Berbatov and Sergio Aguero in the division’s history books.

Remarkably the game was just 1-0 up at the break, before Defoe exploded in a devastating performance that encapsulated the very best of the Spurs striker. He became the first – and only – player to have scored five goals in one half of Premier League football.

Defoe’s career with England brought 54 caps and 20 goals scored for the national side, but it was one which saw the Three Lions fail to make the most of his natural talent.

He was overlooked for Euro 2004 and again for the World Cup in 2006, the latter tournament seeing Sven-Göran Eriksson select Theo Walcott – a 16-year-old with no Premier League experience – over Defoe.

He earned his chance at the 2010 World Cup in South Africa and scored a crucial winner against Slovenia to seal England’s place in the last-16, but that would be the highlight of an international career that saw him make 22 starts from 54 caps.

He remains England’s all-time leading scorer as a substitute, having netted seven times from the bench.

Defoe was a notable omission from the 2014 tournament after deciding to leave Spurs for MLS, his move to Toronto FC contributing to his World Cup omission with the forward later admitting he ‘won’t ever get over the decision’.

He continued to score goals after crossing the Atlantic, but the lure of the Premier League proved too strong and he returned to sign for Sunderland in 2015.

Far from finished at the highest level he excelled during an impressive spell on Wearside, scoring 15 league goals in consecutive seasons to earn an England recall.

Among them came a stunning winner in the Wear-Tyne derby, an audacious volley that flew past Tim Krul to hand Sunderland a 1-0 win over Newcastle United at the Stadium of Light.

During that time in the North East he also formed a touching and emotional bond with Bradley Lowery, a Sunderland supporter who died from a rare form of childhood cancer, aged six, in 2017.

The images of their friendship are almost as synonymous with Defoe as his gift for goalscoring, a remarkable relationship which he admits still crosses his thoughts each day and whose impact has seen the forward continually champion cancer charities.

After leaving Sunderland he signed for former club Bournemouth, but struggled for regular football until a call from former England teammate Steven Gerrard.

Gerrard, now in charge at Rangers, recognised what the veteran could bring to his title-chasing side and brought Defoe to Ibrox.

He scored 32 goals in 74 appearances after moving to Scotland, with the 2020/21 season bringing league title success following a historic unbeaten campaign, ending Celtic’s pursuit of ten-in-a-row

Hours and hours of repetition on the training ground made Defoe one of the finest finishers of his era, his unpredictable movement and studious approach to goalscoring seeing him net 163 goals in the Premier League.

His final venture, a return to Sunderland, lasted little more than weeks as Defoe called it quits this week. An infectious enthusiasm for goals defined his game from his very first appearance until his last, but the legs proved a little heavy as he creeps towards his 40th birthday.