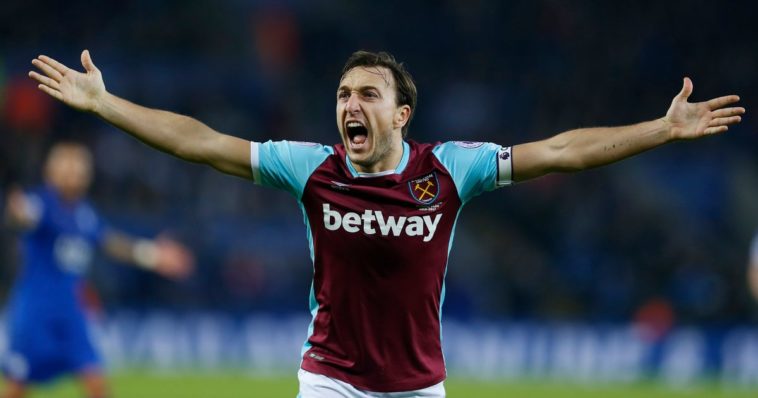 Players come and players go. Long-serving team members at any club these days is something of a rarity. Clocking up a few seasons with a team is seen as a landmark nowadays as clubs regularly change their squads and players have more freedom of movement.

All of this is in stark contrast to the pre-1960s period when teams had all of the power and players were bound to unbreakable long contracts. Seeing out a career with one club was also something many would want to strive for as a lucrative testimonial was always on offer to those that completed 10 years service.

Consequently, it is refreshing to know that West Ham currently has one player who has only turned out for the claret and blue, 394 times to be exact, and wants to finish his career at the club.

The Academy of Football graduate Mark Noble is currently the team’s longest-serving player and captain. He is closing in on 400 appearances and will become just the 19th player in Hammers history to pass the landmark.

The two-time ‘Hammer of the Year’ turns 30 in May, nearly 13 years after making his debut in October 2004, and is one of a rapidly dying breed of one-club men plying their trade in the Premier League.

To me, looking at myself at the age of nearly 30, I’ve still got a contract until I’m 33 and thinking about playing for another football club would be funny – I think Steven Gerrard said that as well.

Walking around the place, I know all the coaches at Under-7, Under-8 and Under-9 level. Sometimes I go and watch the youngsters train and I feel like I’ve been there and done it myself, coming up through the ranks with the Club.

Captaining the club I support is a major honour for me. I don’t think I’ll appreciate it fully until I stop playing.

There aren’t many of us now, because football is forever changing, managers change and obviously relegation battles mean players move on, so I think it would be very hard for players now to keep in the team they support and stay there after coming through the Academy.

Noble is currently the only Academy graduate regularly turning out for the Hammers. Last season there were a couple more, but James Tomkins was sold to Crystal Palace in the summer and youngster Reece Oxford, after only making a handful of appearances, was sent out on loan to Reading.

If Noble does retire having only played for West Ham he will join an illustrious list of ex-players. Not many have achieved this feat, as even the famous Bobby Moore and Sir Geoff Hurst, having played 647 and 502 times for West Ham respectively, both finished their careers at other clubs.

They only wore claret and blue

The last player to retire from top flight English football having only played for the Hammers was Sir Trevor Brooking. He played 643 times between 1967 and 1984, scoring 102 goals along the way. The most notable of these the winning goal in the 1980 FA Cup final against Arsenal.

Others who achieved this claret and blue milestone include the pre-war central defender Jim Barrett – 442 appearances and 49 goals – and legendary goalkeeper Ernie Gregory who retired in 1960 having played more than 300 times.

Keeping the great Bobby Moore in third place in the all time West Ham appearance league table are Billy Bonds and Frank Lampard Snr – with 799 and 670 appearances respectively.

Although both of these two players are intrinsically linked with the club’s history, they played for other clubs and so fail to meet the one-club criteria. Bonds started his professional career across the River Thames at Charlton Athletic, before being transferred to West Ham in 1967. Lampard meanwhile completed his career with a final swansong at Southend United, turning out 33 times during 1985-86 season.

I would like to finish my career here, that’s what I’ve always thought. I can’t see myself playing for another football team, but football is such a changing world so you can’t ever tell what’s going to happen next season.

As I said, I’ve got three years left on my deal here and I’m not sure my body will let me go far past the age of 33, to be honest!

Whether he does retire as a one-club man or not, Noble will, at the age of 33 be getting close to Brooking’s impressive appearance tally, and you never know, even Bonds’ all-time record.

Is Mark Noble a West Ham great? Will he stay at West Ham for the rest of his career? Leave us a comment below