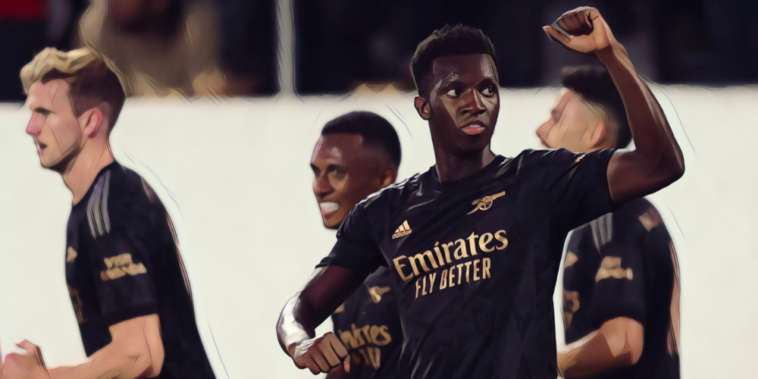 Arsenal began their Europa League campaign with a 2-1 win at FC Zurich, with Eddie Nketiah at the centre of the club’s victory over the Swiss champions.

Nketiah scored a second-half winner for the Gunners, having also teed up the opener and conceded a penalty from which Zurich equalised.

Arsenal’s breakthrough came through Marquinhos, who converted Nketiah’s comeback with an emphatic finish into the top corner to mark his debut for the club with a goal. The 19-year-old signed for the North Londoners from Sao Paulo in the summer but has yet to feature in the Premier League.

Zurich were handed a route back into the contest just before half-time however, as Nketiah was penalised for a foul on Fidan Aliti inside the box. Mirlind Kryeziu converted confidently from the spot to level.

The players observed a minute’s silence after reemerging from half-time, following the announcement of the passing of Queen Elizabeth II, with Mikel Arteta adorning a black armband in tribute.

After the restart, Nketiah atoned for his earlier error with the winner as he headed home from Marquinhos’ cross to ensure Arsenal’s campaign got off to a winning start.

Arsenal return to Premier League action at home to Everton this weekend, before welcoming PSV Eindhoven to the Emirates in the Europa League next week.