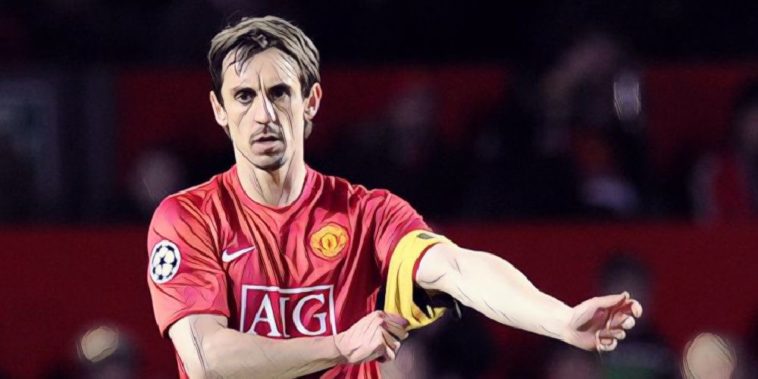 Gary Neville says he never once contemplated leaving Manchester United but has revealed the three Premier League sides he would have liked to have played for – had he been sold by the club.

The former England international spent his entire career with Manchester United after coming through the club’s academy system, making over 600 appearances in all competitions and winning a wealth of major honours including eight Premier League titles and two Champions League trophies.

Recognised as one of the Premier League’s great one-club men, Neville admits he ‘never for one second’ thought about the possibility of leaving Old Trafford, though has revealed that he would have considered a move to Arsenal, Aston Villa or Newcastle had he been shown the exit door.

“Never for one second did I ever want to take the blinkers off,” Neville told Sky Sports’ Off Script Podcast. “Just before David Beckham left, I could feel for a few months that there was something brewing, I could never for one second understand or get my head around it at the time how any player at the club could ever think about leaving. I couldn’t compute it.

“For myself, it never once entered my head. My longest contract negotiation was three meetings; they were normally done inside one or two meetings, and they were always long contracts.

“I thought this week about players during the coronavirus, and how I really valued security in my contract. It came from my family, having my contract tied down was critical. It was the right approach, though some players ran down their contract to Bosman so they could be in a stronger position when negotiating a new contract, but I never felt like that route was right for me.

“I’d made the decision quite early in my 30s that if Sir Alex had come and told me my time was up, I wouldn’t have played for anyone else. I was fortunate in that sense.

“However, if he’d come to me at say the age of 28, and told me my time was up, of course I would have played for another Premier League club.

“Who would I have played for? You can rule out three: I’d have never have played for City, Liverpool or Leeds. Not in a million years. I don’t feel anything bad towards the players who did that, but me personally, I couldn’t have done it. The rivalry is just too much.

“In Europe I admired Juventus and Bayern Munich. I respected them as football clubs. Bayern were meticulous in their preparation, so internationally, it would be them.”