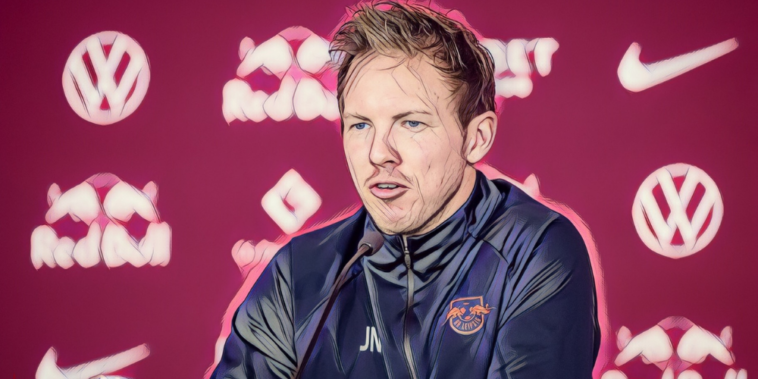 Julian Nagelsmann admits Liverpool are the ‘slight favourites’ as he prepares his RB Leipzig side to face the Premier League champions in the Champions League’s last 16 tomorrow night.

The Premier League side head into the contest in poor form having lost their past three league fixtures in succession, including a late capitulation to lose 3-1 at top four rivals Leicester on Saturday.

Leipzig currently sit second in the Bundesliga and have won their past four games in all competitions, though despite the contrasting form Nagelsmann believes his side are slight underdogs ahead of the clash with the 2019 winners.

“We are in a good flow. We have won the last four matches while Liverpool have not won five out of their last seven,” Nagelsmann told his pre-match press conference.

“They are the slight favourites based on their international experience but we have shown that we can hold our own against such teams, both last year and this season with a very tough group stage.

“We have clearly developed as a team.”

Leipzig qualified for the knockout stages despite facing a difficult group after drawing both Paris Saint-Germain and Manchester United, and will be hoping to progress to the latter stages once more after reaching the last four in 2019/20.

Nagelsmann is wary of the threat posed by Liverpool, however, and believes Klopp’s conceding of the Premier League title this week could mean the Reds are ‘100% focused’ on securing success in Europe.

“A lot depends on the form of the day,” Nagelsmann added. “We know that Liverpool still are a very good team with world-class players. It is always difficult to defend against them.

“The results in the Premier League don’t count in the Champions League. They have written off the league title and will be 100% focused for the game tomorrow.”