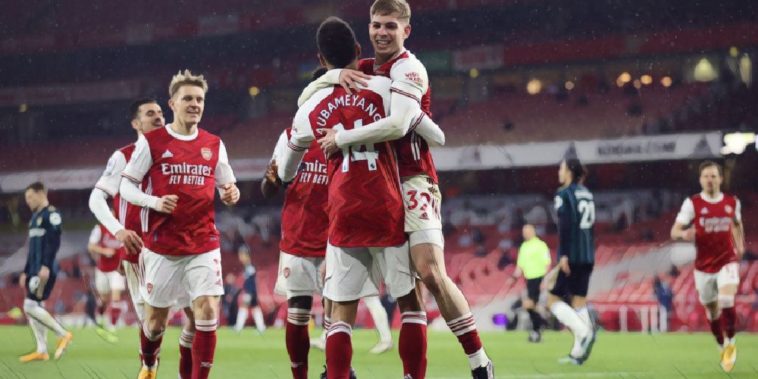 Manchester City’s march towards a third league title in four seasons continued with a 3-0 win over Tottenham this weekend, their position at the top strengthened further as Manchester United dropped points at struggling West Brom.

Liverpool imploded to lose for the third consecutive fixture at Leicester, whilst Pierre-Emerick Aubameyang returned to form in a thriller between Arsenal and Leeds and a winter window signing breathed new life into Fulham’s battle to beat the drop.

Emiliano Martinez only ranks behind Manchester City goalkeeper Ederson in the race for the Premier League’s Golden Glove, the Aston Villa shot-stopper registring his 12th clean sheet of the campaign at Brighton this weekend.

Dean Smith’s side were disappointing against the Seagulls and had Martinez to thank for coming away with a goalless draw, the Argentina international at his brilliant best to thwart the home side’s attack.

Martinez’s nine saves were the most he has ever made in a Premier League fixture and he is now just three clean sheets short of equalling Brad Friedel’s record of 15 in a season by an Aston Villa ‘keeper.

7 – Emiliano Martínez has kept seven away clean sheets in the Premier League this season – the only Aston Villa goalkeeper to register more away shutouts in a single campaign in the competition was Brad Friedel in 2009-10 (8). Wall. pic.twitter.com/OfpHOISCZM

The 28-year-old has proven one of the signings of the season and Arsenal must surely be questioning their decision to allow him to leave, Martinez boasting a better save percentage and more expected goals prevented than Gunners’ number one Bernd Leno this season.

Burnley produced an emphatic away performance to thrash Crystal Palace and remain eight points clear of the Premier League’s bottom three, scoring twice inside the opening 10 minutes in an impressive 3-0 win at Selhurst Park.

It was the third goal that put the gloss on a fine result, however, Matt Lowton driving forward past a succession of Palace challenges before exchanging passes with Jay Rodriguez and lashing home a delightful volley beyond Vicente Guaita.

The goal was Lowton’s first in the Premier League for almost eight years and the highlight of a superb performance from the right-back, one in which he provided a constant outlet and helped nullify the threat of Eberechi Eze.

Sean Dyche will have been pleased with his entire Burnley side following arguably the club’s most impressive performance of the season at Crystal Palace, a superb showing led by a commanding display from captain Ben Mee.

Mee was dominant defensively and made a number of strong challenges on the Eagles’ forward line, with both Christian Benteke and Michy Batshuayi getting little change from the Clarets’ captain.

The 31-year-old’s departure on a stretcher was a huge negative on an otherwise pleasing afternoon for Burnley, though Mee’s return to his feet following the full-time whistle was encouraging and Dyche will hope the centre-back is available for Wednesday’s crunch clash with 18th-placed Fulham.

John Stones has enjoyed some renaissance this season with his return to form having come alongside the excellent Ruben Dias, though the 26-year-old continued his fine form in the absence of Manchester City‘s club-record signing this weekend.

Stones marshalled the backline brilliantly in the 3-0 win over Tottenham and produced another commanding display, providing a calming presence at centre-back and passing through opposition lines intelligently throughout.

On current form, there can be little debate that Stones deserves an England recall and he must surely go into Gareth Southgate’s starting side, the defender having been a hugely influential figure on his side’s title challenge, victory over Spurs extending the league leader’s winning run to 11 consecutive games in a sequence that has included nine clean sheets.

Fulham secured a vital victory in their battle to beat the drop after winning 2-0 at Everton on Sunday, their performance fully deserving of three points as they controlled the contest against the Champions League chasing Toffees.

Scott Parker’s side headed into the clash on the back of a run of 12 games without a win but played with an admirable confidence on Merseyside, securing three points which moves them within seven of safety.

The Cottagers had a number of impressive performers with left-back Ola Aina amongst their stand-out figures, the former Chelsea youngster excellent in the build-up to Josh Maja’s opening goal at Goodison Park.

Aina picked up the ball deep before exchanging passes with Ademola Lookman, driving forward into space superbly before providing an inch-perfect cross for the forward to tap home from close range.

Leicester strengthened their claim for a top-four finish with a 3-1 victory over Liverpool, coming from behind to beat the out-of-form champions and move seven points clear of fifth-placed Chelsea.

Brendan Rodgers’ side were second best for much of the contest before staging a late fightback, with midfielder Wilfred Ndidi at the heart of the Foxes’ display at both ends of the pitch.

The Nigerian international worked tirelessly in the engine room and made an astonishing 19 ball recoveries, the highest-figure recorded by any player in a Premier League fixture so far this season.

Wilfred Ndidi made more ball recoveries (19) in a single match than any other outfield player in the Premier League this season.

Putting in a shift against Liverpool. pic.twitter.com/bXC5CDs0Fg

Ndidi covered the ground superbly and made a number of strong challenges, a typically industrious showing from the midfield anchorman capped with a wonderful assist as he played in Harvey Barnes to seal victory.

Incredible once more from a player who simply can’t stop scoring at the moment, Ilkay Gundogan has emerged as arguably the favourite for the Player of the Year accolades following a stunning run of form to inspire Manchester City’s title charge.

It’s now 11 goals in his past 12 league appearances with no player across Europe’s five major leagues having netted more since the turn of the New Year, a remarkable run of form for a player whose previous best goalscoring season consisted of just six league goals.

The Germany international has thrived in a more advanced role this season after being freed to push forward from midfield, Gundogan scoring twice against Tottenham at the Etihad this weekend to reemphasise his status as the Premier League’s form player.

The assist from Ederson 🤯
The control from Gundogan 👌
The collapse from Sanchez 🤦‍♂️pic.twitter.com/SkFQWIHp9I

Gundogan had earlier won a penalty before another clinical display of finishing continued his stunning scoring streak, and Pep Guardiola will be praying the midfielder’s groin injury is not serious after he limped off late in the contest.

Outstanding once again despite failing to get himself on the scoresheet against Tottenham, Raheem Sterling ran the north London side ragged for much of the contest at the Etihad this weekend.

Ben Davies initially struggled with the guile of Phil Foden before being tormented after City’s wingers switched flanks, Sterling’s speed and skill ensuring the Welsh international endured a torrid evening against the league leaders.

Sterling was involved in City’s best moments throughout and his direct running caused plenty of problems, with the England international providing the assist for Ilkay Gundogan’s opener after an enterprising run into the Spurs’ box.

The goals may not be flowing as freely as in previous seasons but Sterling remains crucial to Pep Guardiola’s plans.

Barnes initially struggled to find his feet against Liverpool with international colleague Trent Alexander-Arnold getting the better of their one-against-one duel, but the winger persisted and grew into the game to cause the Reds’ backline nightmares.

The 23-year-old was direct and dangerous in possession and it was his ability to beat players that resulted in the free-kick that led to James Maddison’s equaliser, Barnes brought down on the edge of the penalty area by the rash Thiago Alcantara.

The England international was rewarded for a performance full of energy and endeavour after putting the finishing touch on an important result for Leicester, racing onto Wilfred Ndidi’s long pass before finishing calmly to boost the Foxes’ hopes of a top-four finish.

Fulham’s improvement in performances has not been reflected in results with goalscoring having been a huge problem for the relegation-threatened Cottagers, the board looking to address their lack of firepower with the late window signing of Josh Maja.

The former Sunderland forward had scored 11 goals in 49 appearances for Bordeaux before returning to English football earlier this month, and the 22-year-old provided a demonstration of what he can bring to Scott Parker’s side on his first start.

Maja twice found himself in the right place at the right time to turn Fulham’s dominance into three points, securing a priceless victory at Everton which has provided hope of a miraculous escape from the bottom three.

🇳🇬 @joshmaja is the second Nigerian to score a brace on his first #PL start, after Efan Ekoku in May 1993 👏#EVEFUL pic.twitter.com/Zs0xXi0SDh

Fulham had never previously won a league game at Everton and had failed to take a single point since 1959, their history-making win sparked by a mid-season signing whose arrival could yet prove a turning point in the club’s season.

Pierre-Emerick Aubameyang has struggled for much of the season so far but looked back to his best this weekend as Arsenal beat Leeds 4-2 in an entertaining contest at the Emirates.

The north London side raced into a four-goal lead and it was the club captain at the heart of a fine attacking performance, scoring his first-ever Premier League hat-trick on his return to the starting side.

Aubameyang’s first came as he cut inside from the left before firing low past Illan Meslier, before stepping up confidently to net a second from the spot and claiming the match ball with a close-range header.

The 31-year-old thrived as the spearhead of an Arsenal team packed with youthful creativity in the attacking midfield roles, and Mikel Arteta will hope this performance is the start of Aubameyang hitting a purple patch in front of goal.

See also – Premier League Stats Crunch: Man City on a roll, Man Utd on the slide, Auba on the rise