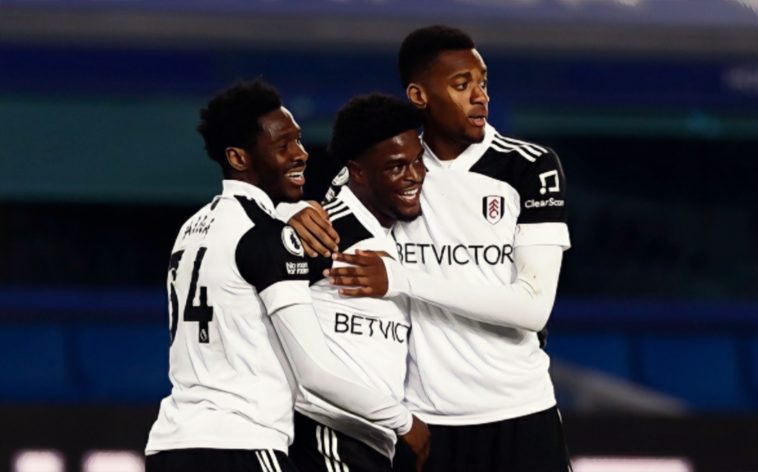 The latest round of Premier League action saw Manchester City’s midfield goal-machine continue his incredible form with another star showing, whilst a winter window signing showed Fulham what he can bring to the struggling side.

There was a first-ever Premier League hat-trick for Arsenal’s club captain in a six-goal thriller with Leeds at the Emirates, whilst two of the division’s brightest young talents underlined their increasing importance and huge potential.

Following another round of brilliant entertainment we’ve picked out some of the Premier League’s leading performers, here are eight players who shone brightly this weekend:

Pierre-Emerick Aubameyang has been one of the Premier League’s most-feared forwards since signing for Arsenal from Borussia Dortmund three years ago, scoring 22 league goals in each of the past two campaigns.

That prolific form has faltered this season with the Gabon international having largely looked like a shadow of his former self, but he returned to form in stunning style this weekend with a clinical hat-trick against Leeds.

Mikel Arteta returned the forward to a central role and he flourished ahead of an exciting contingent of midfield options, Martin Odegaard impressive on his first start since signing on loan from Real Madrid and academy graduates Emile Smith Rowe and Bukayo Saka influential again.

The 31-year-old’s first goal was vintage Aubameyang as he drifted wide to left before cutting inside to fire home, before stepping up to convert a penalty after Saka had been brought down by Illan Meslier.

Aubameyang clinched his treble with a close-range header, moving past 200 league goals in Europe’s top five leagues with only six players having netted more across those competitions since his debut in 2009.

The club captain’s treble will have provided the Gunners with a major boost ahead of a defining run of fixtures in the club’s season, Arsenal facing Manchester City, Leicester and Spurs in their next four league fixtures in addition to a two-legged Europa League clash with Benfica.

Ilkay Gundogan’s incredible form continued this weekend with the midfielder following last weekend’s brace against Liverpool with another double, scoring twice as the league leaders comfortably beat Tottenham at the Etihad.

Gundogan’s goalscoring run has been the driving force behind Manchester City’s surge to the top of the division, with Pep Guardiola’s side having won their past 11 fixtures in succession to open up a seven-point advantage with a game in hand.

The Germany international has provided City with a new attacking dimension in the absence of a regular provider of goals at centre-forward, twice bursting into the box against Spurs before firing low past Hugo Lloris.

His first came after some clever inter-change around the edge of the box before ghosting forward, whilst his second was an example of the advanced position he has fulfilled in recent weeks as the 30-year-old race onto a superb long pass from goalkeeper Ederson.

Gundogan has now scored 11 goals in his past 12 league appearances with nine of those coming since the turn of the New Year, the star – who had never previously bettered six league goals in a season – remarkably the leading scorer in Europe’s major leagues in 2021.

Gundogan limped out of the clash with Spurs with a groin injury and City now face a nervous wait ahead of Wednesday’s trip to Everton, the in-form midfielder an irreplaceable figure at present and fast emerging as the favourite for the Player of the Year accolades.

Fulham’s business late in the summer transfer window helped turn the west London side from relegation certainties to competitive outfit, though the failure to recruit a guaranteed source of goals has left the Cottagers mired in the bottom three.

The club’s lack of goals saw Scott Parker move to strengthen his attacking options with the mid-season signing of Josh Maja, and the winter window arrival from Bordeaux enjoyed a full debut to remember this weekend.

Fulham had never previously won a league fixture at Everton and had not taken a single point since 1959, though a brilliant team performance saw Parker’s side secure a vital victory and raise hopes of survival.

Central to the success was Maja who marked his Premier League debut with both goals, finding himself in the right place at the right time on two occasions to demonstrate the predatory instincts that have been lacking from Fulham’s play for much of the season.

It doesn't get much better than that for Josh Maja! 👏 pic.twitter.com/aoKjJzbFG5

The win ended a run of 12 league games without a victory and whilst Fulham still have a significant deficit to bridge, the Cottagers will take huge encouragement from a first-ever win on the blue half of Merseyside.

Parker’s late-window signing of Maja – who previously spent time in the club’s academy system – could have provided Fulham with the focal point they need as they bid to turn spirited showings into tangible results.

West Brom are another side who remain in deep relegation trouble but without Sam Johnstone this season the Baggies may already be dead and buried.

Johnstone has had to wait a long time for his opportunity at Premier League level and it is a testament to the 27-year-old that he has earned such credit despite keeping goal behind the division’s worst defence by a distance.

In truth, Johnstone was perhaps not as busy as he had anticipated this weekend as a Manchester United side unbeaten away from home in more than a year arrived at The Hawthorns, but he produced an incredible moment of athleticism and agility to save his side a point late on.

Harry Maguire’s header looked destined to snatch the Red Devils a stoppage-time victory, only for the West Brom number one to palm away a certain goal at full stretch.

It was a moment of goalkeeping brilliance which continued West Brom’s fine record against the ‘big six’ this season, securing draws with both Manchester sides, Liverpool and Chelsea.

West Brom often provide their best displays when it is backs against the wall, but Sam Allardcye’s struggling side will need to show they can also play on the front foot if they are to complete a miraculous escape.

Is there a more talented teenager in English football right now?

Bukayo Saka is enjoying an outstanding season at Arsenal and has quickly become the north London side’s most important player, the winger excellent once more as the Gunners secured a 4-2 victory over Leeds this weekend.

Saka plays the game with a refreshing maturity and confidence and gave Ezgjan Alioski no end of problems at the Emirates, the youngster the bright spark in an exciting midfield line-up including Martin Odegaard and Emile Smith Rowe.

The 19-year-old appears to be getting better and better with each passing performance and his development will offer huge hope to both club and country, Saka’s versatility and showings this season surely making him a must-have selection for Gareth Southgate this summer.

Arsenal’s season has proven difficult at stages but in Saka the Gunners have a player which they can build their team around, the academy graduate already an irreplaceable figure for the north London side.

Another of the Premier League’s most talented young footballers, Pedro Neto’s performances have gone somewhat a little under the radar given the inconsistencies of Wolves so far this season.

Neto, however, has been a constant source of creativity and invention for Nuno Espirito Santo’s side and proved the club’s match-winner once more this weekend, scoring a brilliant individual goal as Wolves won 2-1 at Southampton.

Raul Jimenez’s absence through injury and Adama Traore’s inability to find his form has left Neto as the chief source of inspiration for Wolves this season, the 20-year-old having now scored five goals and provided a further four assists during the 2020/21 campaign.

Neto’s moment of magic this weekend provided Wolves with a much-needed three points, ghosting past Jannick Vestergaard following a clever dummy near the byline before beating Alex McCarthy from a narrow angle.

Neto’s ability to carry the ball in possession and inter-change with those around him in attacking areas have marked him out as a potential star, Europe’s elite likely to be monitoring the progress of a player who has made huge strides forward at Molineux this season

Aston Villa’s summer spending has transformed the club from relegation candidates to European contenders this season, and the arrival of Emiliano Martinez from Arsenal may just be their best bit of business.

Martinez has been exceptional during his debut campaign in the Midlands and was the club’s saviour at Brighton this weekend, making a huge nine saves to preserve a clean sheet and ensure a below-par Villa returned home with a goalless draw.

The 28-year-old’s nine saves were the most he has ever recorded in a Premier League fixture and helped secure his 12th clean sheet of the campaign, Martinez second to only Manchester City’s Ederson in the race for the division’s Golden Glove.

The Argentina international is now also closing in on the landmark for most clean sheets in a Premier League season at Aston Villa, the 15 recorded by Brad Friedel during the 2009/10 campaign.

Because we don’t 🤷‍♂️ pic.twitter.com/xASueXuUSZ

Villa’s capture of the goalkeeper in a £20m deal has proven one of the signings of the season across the division, Martinez demonstrating the difference a top-drawer ‘keeper can make to his side’s fortunes.

Burnley produced their best performance of the season with an away day success at Crystal Palace, scoring twice inside the opening 10 minutes to lay the foundations for a thumping 3-0 win.

Sean Dyche’s side were impressive from back to front with a number of strong showings for the Clarets, with Matt Lowton enjoying an afternoon to remember as he scored his first Premier League goal since April 2013.

The full-back won possession just inside the Crystal Palace half before surging forward, evading two Eagles’ challenges before playing the ball into the path of Jay Rodriguez.

Rodriguez lifted the ball back into the direction of Lowton who had continued his run into the penalty area, the 31-year-old lashing home a superb volley to wrap up the victory with Burnley’s third.

It was a moment of inspiration from the rarest of goalscorers, Lowton capping an all-action display at right-back with the execution of wonderful piece technique.