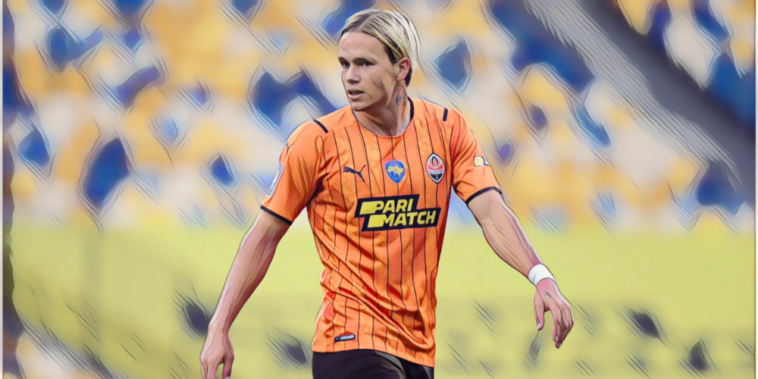 Mykhaylo Mudryk admits he dreams of a move to the Premier League and insists it would be difficult to turn down an approach from Arsenal.

Mudryk was linked with a number of Premier League clubs during the summer transfer window, with Arsenal, Everton and Brentford all making an approach for the Shakhtar Donetsk star.

The 21-year-old shone during the Champions League’s opening fixtures this week, as he scored one and created two goals in Shakhtar’s 4-1 thrashing of RB Leipzig. His performance has increased speculation of a move away from the Ukrainian side and Mudryk has opened up on his dream of a Premier League transfer.

“There was a lot of discussion about a transfer, that different clubs want me, but it’s normal,” The winger told CBS. “For now, I’m at Shakhtar and I want to play in this team. I love this team. Shakhtar is my home.

“In winter we will see. Every guy dreams of playing in the Premier League. Arsenal is a very good team with a very good coach, I like the way they play.”

Shakhtar winger Mykhaylo Mudryk says he’s open to an Arsenal move in January and sets the record straight on his nickname 🇺🇦 pic.twitter.com/vWv652D0yO

Asked whether he would be interested in a move to North London should a bid arrive from Arsenal in January, Mudryk admitted it would be difficult to turn down the Gunners.

“From my side I can’t say no, but a transfer is not only my decision.”