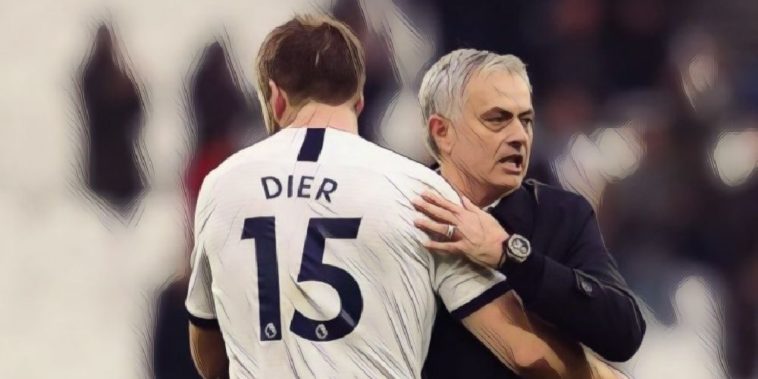 Jose Mourinho reckons Eric Dier’s future is at centre-back as the Tottenham manager prepares to be without the defender for four games through suspension.

Dier has started each of the club’s past six league fixtures in a central defensive role having previously been utilised in midfield for much of his Spurs career, Mourinho seeking to bring stability to a side that has kept just five Premier League clean sheets since his November arrival as manager.

Two of those shutouts have come in the last three fixtures with Dier at the heart of the defence and ahead of tonight’s clash with Bournemouth, Mourinho says both player and manager have decided his long-term future is at centre-back.

“We made a decision together,” Mourinho said at his pre-match press conference.

“I told him immediately since my arrival, ‘Let’s go in a certain direction but I think you are not ready, so let’s try to go back to a certain level being a midfielder but always with an eye of transforming you as a centre-back’, which is where he feels happiest.”

Mourinho spoke of the qualities Dier can bring when playing as a central defender, believing the England international can become ‘an important player’ for the north London side with his ability to bring the ball out from the back.

“He is very comfortable on the ball, the building up of play and without any kind of problem attacking the space in front of him – being an extra man and building up play in the midfield.

“I think he is doing very well, we look forward to next season where from the beginning I have no doubts he will be there as a centre-back.

“I think he is going to be an important player for us.”

Spurs will, however, be without Dier for four of their final fixtures after the 26-year-old was hit with suspension by the Football Association, the ban coming after the player climbed over seating to confront a fan during the club’s FA Cup defeat to Norwich in March.

The club have opted against appealing the decision and will now be without Dier for all but one of their remaining Premier League fixtures, with Mourinho believing Spurs face little chance of overturning the verdict.

“I don’t think so honestly because if you appeal, you have other risks and let’s at least start next season without a suspension,” said Mourinho.

“We all know how it works with these FA decisions.