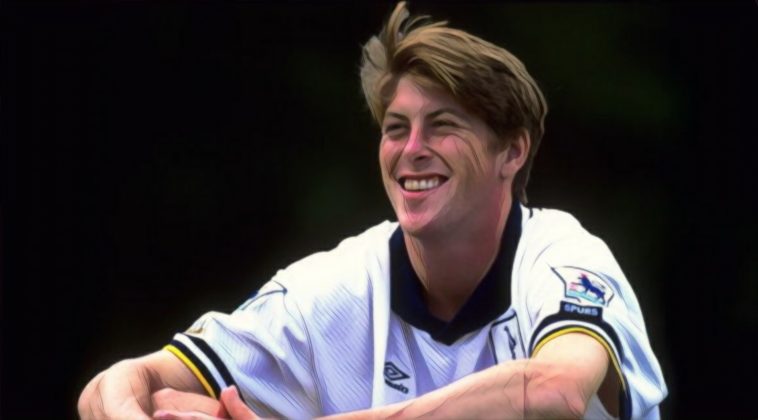 Former Tottenham Hotspur and England wide man Darren Anderton is the latest inductee into the 90’s Football Hall of Fame.

Anderton’s big break came as a 20-year-old when he scored a brilliant goal for Portsmouth against Liverpool in the FA Cup semi-finals in 1992, which earned him a £1.75m move to Spurs that summer.

Lining out for the north London outfit for 12 years, Anderton became a firm fan favourite among the Lilywhite faithful. After starting out as a striker, he developed into a winger and attacking midfielder, entertaining the White Hart Lane crowd with his stunning long range goals, superb crossing and intelligent play.

The Southampton native, who also played for Birmingham, Wolves and Bournemouth in his career, possessed terrific ability and talent, but there was always a sense that his career never took off in the way that it should have due to recurring injuries.

Anderton only won one trophy in his career – the 1999 League Cup – and should have had more than the 30 caps he won for England, although he was a key part of the Euro 96 team that reached the semi-finals of the tournament.

In this episode of the 90’s Football Hall of Fame podcast, Ste is joined by Peter and Ant to discuss Anderton’s career, his penchant for thrilling goals, whether he was underrated or not, and if his reputation as the constantly injured ‘Sicknote’ was unfair.

We also chat about his ridiculously consistent hairstyle, why he didn’t sign for Manchester United, and the agonising miss against Germany that could have made him an England legend forevermore.

Listen to the 90’s Football Hall of Fame now:

Read: Glamorous Ginola wasn’t a great goalscorer, but a scorer of great goals