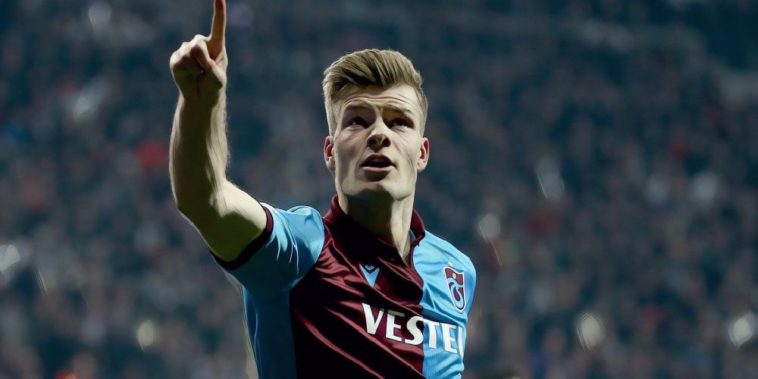 Jose Mourinho was coy when asked on Tottenham’s reported interest in Alexander Sorloth, with the club reportedly interested in the Norway international as they bid to bolster their attacking options.

The north London side have struggled for attacking depth in recent seasons with Harry Kane firmly the club’s undisputed first-choice forward, with a number of back-up options having failed to challenge the England captain before departing in search of more regular opportunities.

Kane’s presence has made recruitment difficult in terms of signing players of pedigree, but Mourinho spoke earlier this week of his confidence the club would land a new forward to add to the summer signings of Pierre-Emile Hojbjerg, Matt Doherty and Joe Hart.

Spurs have been linked with a move for Torino’s Andrea Belotti, whilst recent reports have seen Crystal Palace flop Sorloth mooted as a potential target – the 24-year-old having flourished since moving on loan to Turkish side Trabzonspor.

Trabzonspor president, Tehmet Agaoglu, this week revealed the player is keen to leave the club after winning the Turkish Super Lig Golden Boot with 24 goals last season, and says discussions will be held between a host of clubs in what shapes up to be a potentially complicated deal.

Sorloth is half-way through a two-season loan deal with Trabzonspor from Palace, though the Turkish side have an obligation to buy the player for just £5.5m if he plays 50% of their matches this season.

He puts in on a plate for Alexander Sørloth and Norway have 4⃣!

RB Leipzig are also interested in the towering forward and with Palace reportedly not having an option to cut short his deal, a financial agreement must be reached between all parties ahead of a potential move.

“Sorloth wants to go,” Agaoglu told Fanatik. “But there is no way that we will agree immediately for every player who wants to leave.

“We are meeting with Leipzig and Tottenham, ourselves and Crystal Palace. We are both entitled to this transfer, we will act in Trabzonspor’s best interests.”

Mourinho, however, refused to discuss the player’s future despite Agaoglu’s comments, but suggested his side are interested in the Norwegian ahead of October’s transfer deadline.

“Well I’m not going to discuss Sorloth,” he said at his post-match press conference following Spurs 1-0 loss to Everton. “If the president of Trabzonspor said that, I’m not going to say that it’s not true.

“I think Sorloth is a Trabzonspor player and it’s not for me to speak about.”