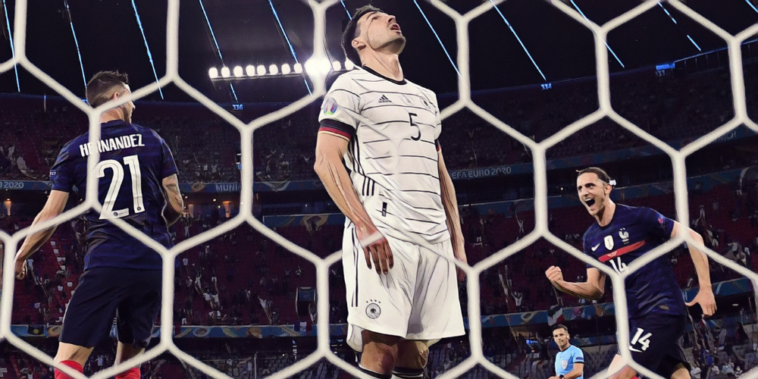 More often than not, own goals are a stroke of misfortune rather than an individual mistake, but it makes the sight of putting through your own net no less embarrassing for those who do so.

Euro 2020 has already seen a whole host of players score own goals to date, with Martin Dubravka and Juraj Kucka the most recent own goalscorers after each putting through their own net in Slovakia’s 5-0 defeat to Spain.

Following the duo’s faux pas, we’ve decided to look at the European Championship tournaments to feature the most own goals.

The European Championship was once a much simpler and scaled-down event, with just four teams contesting the 1976 edition of the finals held in Yugoslavia.

The final of the tournament was contested by the Czech Republic and West Germany, with the Czechs progressing after beating the Netherlands 3-1 in the semi-finals, despite Anton Ondruš putting through his own net.

Euro ’76 is most remembered for the way the showpiece was decided, as Antonin Panenka wrote himself into the history books with an impudent chipped penalty to crown the Czechs champions.

Euro ’96 featured a huge 27 more matches and 12 additional teams to the tournament two decades earlier, though matched the 1976 edition with just one own goal scored.

That dishonour fell upon the shoulders of Bulgaria’s Lyuboslav Penev, who helped opponents France on their way to a 3-1 win at St James’ Park in the group stages.

Four years later and just one own goal was scored again at the European Championship, despite a glut of goals in one of the most entertaining Euros of all time.

The goal came as part of six scored by co-hosts the Netherlands in a 6-1 thrashing of Yugoslavia in the quarter-finals, Dejan Govedarica slicing Paul Bosvelt’s cross into his own goal in a fixture that also saw Patrick Kluivert net a hat-trick.

England were the sole side to score an own goal at Euro 2012, with Glen Johnson the unfortunate player during a thrilling 3-2 group stage win over Sweden.

The Three Lions had taken the lead through Andy Carroll’s fine header, though Johnson inadvertently levelled the scores after Joe Hart parried Olof Mellberg’s effort against the defender, who failed in his attempt to scramble the ball off the line.

Sweden then took the lead through Mellberg, before England hit back to claim three points as goals from Theo Walcott and Danny Welbeck secured Roy Hodgson’s side their first win of the tournament.

Euro 2014 saw two own goals scored, the first coming from Croatia defender Ivan Tudor who made a hash of a Zinedine Zidane free-kick to slice into his own goal during a 2-2 group stage draw with holders France.

The second of the tournament came with the stakes set a little higher, as host nation Portugal faced the Netherlands in the semi-finals.

The Portuguese put themselves in a commanding position with two goals before the hour, but their lead was halved just four minutes after Maniche’s stunning effort, as Jorge Andrade lifted the ball over goalkeeper Ricardo after stretching to clear a Giovani van Bronckhorst cross.

Portugal held on to progress, before being stunned by underdogs Greece in the Lisbon final.

Three times players scored own goals at the 2016 finals in France, the first denying the Republic of Ireland an opening victory, as Ciaran Clark’s miscue saw the defender stoop to head Zlatan Ibrahimovic’s cross past his own goalkeeper in a 1-1 draw with Sweden.

The third and final own goal came in the knockout stages, with Gareth McAuley sliding Gareth Bale’s cross into his own net, the goal proving decisive as Northern Ireland crashed out of the competition in the last 16 following a 1-0 defeat to Wales.

Somewhat incredibly, Euro 2020 has already featured more than twice as many own goals as any other European Championship in history, with the expanded competition having seen a staggering eight scored before the end of the group stages.

The tournament’s very first goal proved an own goal from Turkey’s Merih Demiral, whilst Portugal inexplicably scored two in one game, with Ruben Dias and Raphael Guerreiro putting through their own net in the 4-2 defeat to Germany.

"As goalkeeping errors go, that is a 𝐡𝐨𝐰𝐥𝐞𝐫." 😳

Mats Hummels’ own goal was the difference as Germany lost 1-0 to world champions France, whilst both Poland’s Wojciech Szczęsny and Finland’s Lukáš Hrádecký have had the misfortune of seeing efforts come off the post before hitting the goalkeepers and finding the net.

Slovakia then made it eight own goals at Euro 2020 to date, with both Martin Dubravka and Juraj Kucka giving Spain a helping hand in their 5-0 thrashing by La Roja – Dubravka’s error an absolute howler.