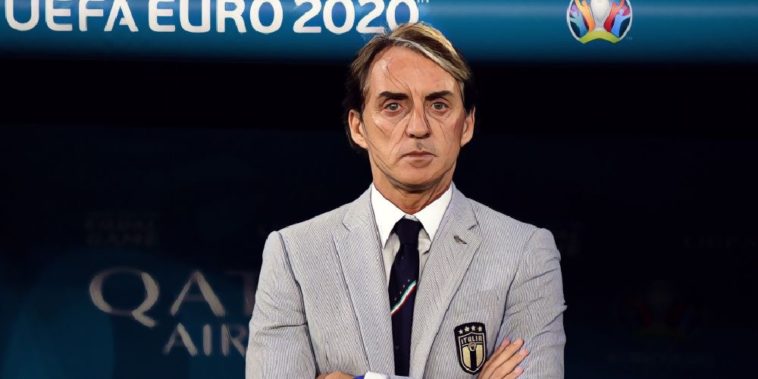 Italy boss Roberto Mancini and skipper Giorgio Chiellini have talked up their ‘stronger’ opponents, ahead of Sunday’s Euro 2020 final showdown with England.

Mancini’s men are looking to secure a first piece of major silverware since their World Cup victory in 2006, as well as a first European Championship triumph since 1968, having reached the final in both 2000 and 2012.

Their current surge to the showpiece has come after a difficult few years for the national team, having failed to qualify for the 2018 World Cup under Mancini’s predecessor, Gian Piero Ventura.

The arrival of the former Manchester City boss has sparked a real revival for Italy in recent times, however, the side currently on a stellar run of 33 games unbeaten, their latest encounter seeing them edge past Spain on penalties in the semi-finals.

Now with England to come at Wembley on Sunday –  a country that the Azzurri have bettered in all four previous tournament meetings – Mancini has praised Gareth Southgate’s physically ‘stronger’ side, although he appeared hopeful that his potentially more technical squad could have the edge.

“England are stronger than us physically right across the pitch,” the Italian said at his pre-match press conference.

“But the good thing is that you play football with the ball on the deck and we hope that we can do a better job on that score.

“We hope the attributes we possess will be more important qualities tomorrow night.

“And occasionally the smaller guy wins. That’s happened to us in the past and hopefully it will happen again at Wembley.”

Meanwhile, captain Chiellini also spoke of the depth of quality of the Three Lions squad, insisting that his teammates will need ‘warm hearts’ and ‘cool heads’ to have success against a side that will no doubt be buoyed by home support.

“It almost makes me laugh because I think England’s bench could have probably made it to the final on their own.

“They have some extraordinary players who can’t get into the team. Thankfully it’s not an individual game, it’s a team game.

“You can’t survive a final at Wembley against England without warm hearts – and nor can you do so without cool heads.