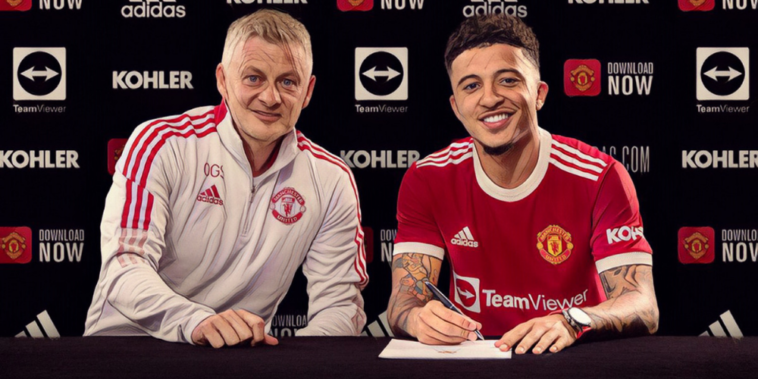 It’s been quite some transfer window this summer with a whole host of eye-catching deals taking place across Europe, notably Lionel Messi’s shock move to Paris Saint-Germain and Cristiano Ronaldo’s long-awaited return to Manchester United.

In the Premier League, in particular, the division’s top clubs haven’t been afraid to be throw their weight around in the transfer market, despite many expecting the financial impact of the ongoing pandemic to lead to a quiet few months.

As it was, even on a frantic deadline day deals were still being chased across the country, with Chelsea notably securing the loan signing of Atletico Madrid midfielder Saul Niguez in the final few hours before the deadline.

With the window now at a close – for a few months at least – it’s time to look back on what the five most expensive transfers of the summer have been in the Premier League.

After a decade-long admiration for the Frenchman, Raphael Varane finally became a Manchester United player this summer, having opted to bring to an end his ten-year stint with Real Madrid to make the switch to Old Trafford.

The Red Devils had looked set to secure his services back in 2011, with Sir Alex Ferguson believing he had agreed a deal to bring the then 18-year-old to England from Ligue 1 side RC Lens, before Los Blancos and Zinedine Zidane intervened to tempt him into making the move to the Spanish capital.

Ten years, four Champions League’s and a World Cup later, the 28-year-old is now a United asset and will add a wealth of winning experience to a side that has been without silverware for far too long, the club’s last trophy having come back in 2017.

His arrival alone may not change that, yet the early evidence is that he will give a real boost to Ole Gunnar Solskjaer’s side, the centre-back putting in a commanding display on debut against Wolverhampton Wanderers at the weekend, as United secured a first clean sheet of the season.

With the role alongside Harry Maguire having long been a problem area, the signing of Varane looks to be a top-class solution, while his inclusion in the side could also negate the need for two holding midfielders ahead of the back four, as was the case at Molineux.

There is still concerns over the lack of a defensive midfielder, yet United supporters can hardly be disappointed by what’s been an impressive window, with the arrival of the serial-winning defender for just £41m a real coup, the player having had just one-year remaining on his existing deal at the Bernabeu.

The fact that Arsenal forked out more for Ben White than United did for Varane has been a source of mockery on social media for rival fans, yet there’s no doubting that the Brighton defender is an astute, long-term purchase who should improve an ailing backline.

Having impressed in the lower divisions in recent years, with loan spells at Newport County, Peterborough and Leeds, the versatile centre-back made the step up to the Premier League with his parent club Brighton last season and was a key part of Graham Potter’s side.

Comfortable in a back two, back three or even in a central midfield role, the 23-year-old has showcased he is more than at home in the top tier, while he’s already gaining international experience having been a late inclusion into Gareth Southgate’s Euro 2020 squad.

Although he did not feature during England’s surge to the final, his performances in the tournament’s warm-up games were a clear indication of his talent and a marker of just why Marcelo Bielsa’s Leeds were so keen to sign him last summer, having helped the club secure promotion from the Championship the year before.

The most expensive acquisition in a busy, albeit slightly chaotic, window for the Gunners, White is understandably under pressure to make an instant impact, although it should be too soon to pass judgement despite his shaky debut in the defeat to Brentford on the opening day.

The fact he has been absent since due to a positive Covid test has been unfortunate, although he is likely to come straight back into the side after the international break, with Mikel Arteta’s men having looked all at sea defensively in the weekend’s mauling at the hands of Manchester City.

One of four summer arrivals for Man United – alongside Varane, Ronaldo and Tom Heaton – Jadon Sancho finally secure his move to Old Trafford back in July, having initially looked destined to join the club 12 months ago before the deal broke down.

After almost two years of being linked with his signature, the overriding feeling once he did eventually put pen to paper was relief, with the long drawn-out transfer saga now finally at a close.

Although the delay in his switch to Manchester has tempered the excitement somewhat, he still remains a major coup for the club, the 21-year-old having developed into one of the most productive forward players in world football during his four-year stint at Borussia Dortmund.

After arriving in Germany from Manchester City for a fee of around £10m in 2017, the England international has gone on to record a staggering tally of goal involvements, netting 50 goals and registering 64 assists in 137 appearances for the Bundesliga side in all competitions.

Able to play on either flank, Sancho should provide the kind of creativity that United have been crying out for in recent seasons and could well shoulder the burden from Bruno Fernandes, who has been the main source of goal contributions over the last 18 months or so.

It may be difficult to say about a £73m signing, but he is still something of an unknown quantity to many on these shores and is likely to surprise a few with just how good he actually is, even if he’s had a quiet first few games for the club to date.

Someone who’s already made an instant impact back in English football is Romelu Lukaku, the Belgian striker re-joining Chelsea in a £97.5m deal almost exactly a decade after having originally joined the club as a teenager.

While he failed to score a single league goal in a first spell that largely saw him spend time out on-loan, the 28-year-old is a different player this time around and looks rejuvenated after a prolific stint in Italy with Inter Milan, where he netted 47 goals in just 72 Serie A appearances and fired the club to a first league title in 11 years last season.

One of a handful of notable departures from the San Siro due to their economic woes, the Italian side’s loss is Chelsea’s gain with the 28-year-old now at the peak of his powers and already looking like being the final piece of the jigsaw for a side who were wasteful in front of goal last term, despite clinching the Champions League.

In his first game back against Arsenal, the former Man United man simply bullied the Gunners backline and got his customary debut goal, shaking off Pablo Mari with ease before racing onto a Reece James pull back to slot home.

While he faced a sterner test in the form of Virgil Van Dijk at the weekend, he was more than up to the task and produced an effective display in a lone forward role with Thomas Tuchel’s side down to 10 men for the entirety of the second-half.

Although his main remit will be to score the goals provided to him by a stellar supporting cast, that well-earned draw with Liverpool proved that he is not afraid to do the dirty work either, with his hold up looking much improved from his underwhelming Old Trafford stint.

For a long time it looked as if Harry Kane may eclipse this figure with a move to Manchester City, yet as it is Jack Grealish remains not only the most expensive signing of the summer, but also the most expensive British transfer of all-time.

The Aston Villa skipper had long been linked with a departure, stretching back to interest from Tottenham Hotspur a few years ago as well as from Manchester United, so it came as no real surprise to see him move on this summer, particularly after impressing for his country at Euro 2020.

The Englishman’s impact may have been too brief for some, yet it no doubt would have given him a taste of the top level and also a desire to earn a more regular starting berth ahead of the World Cup next winter, hence the need to make that step to one of the country’s top sides.

The hope for the 25-year-old and his swell of adoring fans is that his move to the champions will not only improve him as a player, but also improve his standing with Gareth Southgate, who currently has an unenviable task of trying to squeeze in a multitude of attacking options.

It may only be a few games in, yet the forward has already looked at home in a City shirt, notably netting an albeit scruffy goal on his home debut against Norwich, before laying on a superb assist for Gabriel Jesus in the win over Arsenal at the weekend.

Under the tutelage of Pep Guardiola, it is expected that he will only get better as the months and years progress, although it remains to be seen just where his future lies positionally, amid suggestions he could well be deployed as a number eight, or even in a false nine role.