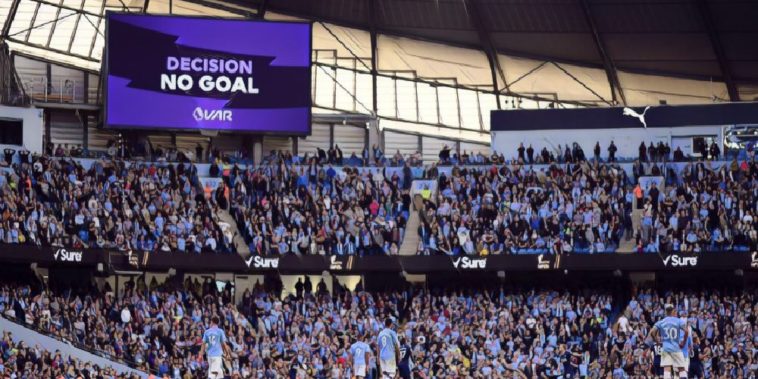 Referee chief Mike Riley has admitted that VAR has made four mistakes so far this season as reports emerge that the Premier League want the technology to be more involved in the decision making process.

It is believed that Riley has called for a high threshold before VAR intervenes, a threshold which has seen a number of poor on-field decisions not overturned.

The incidents in question are believed to be the failure to award penalties to Man City and West Ham, the failure to disallow a Newcastle goal for offside, and a missed red card for Leicester’s Youri Tielemens.

There has also been hefty criticism of the officiating as Aston Villa‘s late equaliser against Crystal Palace, was ruled out for a supposed Jack Grealish dive, though replays clearly showed that the playmaker was fouled, while Manchester United also seemed to be denied at least one penalty against the same opponents.

The Mail claimed this morning that the Premier League have approached the PGMOL, headed by Riley, to allow for more intervention from the Video Assistant in order to eradicate the errors that still exist in the game.

Quizzed by Sky Sports following his meeting with bosses of the English top-flight, Riley admitted there have been four incidents, but admitted they are still ‘learning’ about the system’s implementation.

“We are learning as we go along and we are constantly improving,” Riley said.

“Out of the four match rounds, there have been some really good examples where we have intervened. There have been six incidents where VAR has advised the referee and we have got a better decision as a result.

“There were four incidents where VAR didn’t intervene and had they done, we would have a better understanding of the role VAR plays in the game. [The mistakes] are all about the judgement of VAR and the process that we adopt.

“These are examples were VAR could have had a benefit and intervened to help the referee on the day.

“A combination of factors [caused the mistakes]. That is the fascinating thing as this project evolves, we are constantly learning.

“We are trying not to disrupt the flow of the game but on these occasions, the judgement should have been that it was a clear and obvious error.

“One of the really positive things about the first four match rounds has been the quality of on-field performances.

“All the referees have incorporated the things we need to do with VAR into their refereeing while still focusing on making real-time decisions.”