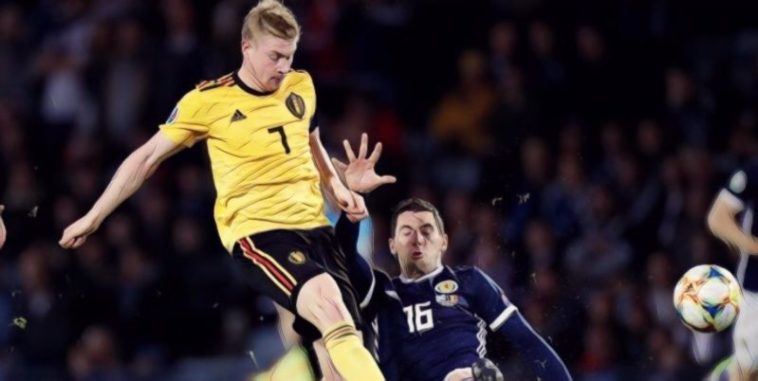 Fans of the Premier League will be rejoicing that the competition returns to action this weekend, following the often much-maligned distraction of the international break.

English football’s top-flight provided more than 150 players for senior international duty this month, with stars jetting across the globe to represent their respective nations. Some of the division’s leading lights excelled in their country’s colours during September, and we’ve taken a look at some of the better performances.

The Manchester City star has been lauded following his performances for England against Bulgaria and Kosovo, with Gareth Southgate tipping the forward to continue his rapid development and join the likes of Lionel Messi and Cristiano Ronaldo as one of the world’s best players.

It is quite some praise, but Sterling has blossomed into one of world football’s most influential forward players and showed again just why he is so important for club and country. After scoring in both fixtures Sterling has now been involved in 12 England goals in his last eight appearances (eight goals, four assists), whilst his performance against Kosovo was simply electric.

The 24-year-old scored once and provided three assists in the thrilling 5-3 win for Southgate’s side, combining brilliantly in an exciting forward line alongside Harry Kane and youngster Jadon Sancho.

England’s forward options look as talented as any in recent years and with qualification almost secured, they will be looking ahead to next summer’s European Championships with hope of making an impact.

A forgotten man at Goodison Park, the Everton forward has fallen behind the likes of Moise Kean and Dominic Calvert-Lewin in the pecking order under Marco Silva. Kean is still yet to open his account following his £30m move from Juventus, whilst youngster Calvert-Lewin has struggled so far this season.

That could hand an opportunity to Tosun, who delivered a timely reminder of his qualities whilst on international duty with Turkey. The 28-year-old scored twice during Turkey’s 4-0 win in Moldova, the first a confident flick over the onrushing goalkeeper before calmly volleying home.

Having been strongly linked with a move away throughout the summer, Tosun could now be handed an opportunity to revive his Everton career.

One of Jurgen Klopp’s most trusted lieutenants at Liverpool, the Netherland’s midfielder showed his importance on the international stage with a pair of impressive performances as the Dutch kept their hopes of Euro 2020 qualification alive in a competitive looking Group C.

Wijnaldum, a hero of Liverpool’s Champions League semi-final win over Barcelona last season, proved himself as the man for the big occasion once more with an inspired performance in Holland’s 4-2 win at arch-rivals Germany.

The dynamic midfielder, playing in a more advanced role than usually seen in the Premier League, dominated in midfield alongside Frenkie de Jong, scoring one and making another to earn Ronald Koeman’s side victory in Hamburg.

He was on the scoresheet once again as Holland followed that success with a 4-0 win in Estonia, as the Oranje moved within three points of Germany and Northern Ireland having played a game fewer.

Having begun the new Premier League season in brilliant fashion with five assists already, the Belgian international transferred his imperious form onto the international stage with Belgium this week.

The Manchester City midfielder captained Roberto Martinez’s heavily-rotated side for their routine 4-0 win over minnows San Marino, before turning in a display of the highest quality as the Belgian’s thrashed Scotland at Hampden Park.

It was a masterclass from De Bruyne who had a hand in all four goals, providing three assists before scoring the fourth in a comprehensive 4-0 victory. It’s now six wins from six in qualification for Belgium, who will start next summer’s championships as one of the favourites.

The Norwich striker simply can’t stop scoring. Having announced his arrival in the Premier League with five goals in four games for the newly-promoted side, the Finland international scored in both fixtures during the recent international break.

Pukki’s penalty earned a crucial 1-0 victory over Greece, though a second successful penalty was not enough to secure a point as Finland lost a narrow contest 2-1 to Italy three days later.

Finland currently sit second in Group J, behind the Italians, and will hope Pukki’s goals can fire them to a first major tournament.

Having cemented his place as Ireland’s first-choice striker since Mick McCarthy took over as Ireland boss, McGoldrick has become a popular figure with the fans on account of his tireless work-rate and astute link-up play.

However, it was starting to feel that for all the positives McGoldrick brought to the Boys in Green side, he seemed to be yet another Irish striker that lacked that killer clinical instinct. Those concerns went out the window late on in the Aviva though, when the Sheffield United man rose highest to head home a crucial 85th-minute equaliser against Switzerland.

Denmark’s subsequent draw against Georgia, means Ireland remain surprisingly on top of Group D, and with McGoldrick finally having broken his international duck at the 11th attempt, McCarthy will be hoping the 31-year-old can kick on and play a major role in inspiring his side to qualification for the Euros.