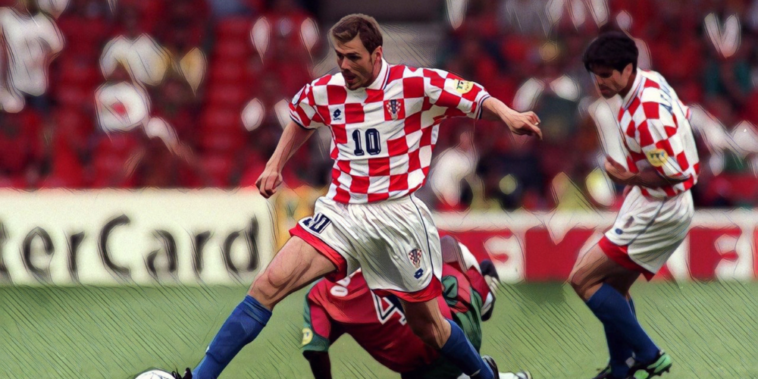 Zvonimir Boban’s career saw the midfielder make waves for both club and country, though perhaps his most famous kick came without a ball on the receiving end.

Boban’s infamous moment in the chaos of a clash between Red Star Belgrade and Dinamo Zagreb has since been called ‘the kick that started a war’ and whilst that label is certainly hyperbolic, it is an indication of how his intervention has since become definitive of one of Croatia’s great talents.

Boban became a sporting symbol of Croatia’s successful bid for independence during the nineties, having found himself firmly at the centre of escalating ethnic and political tensions.

As the nineties began Yugoslavia was beginning to crumble, a series of conflicts splintering the state and seeing the dissolution of the region into independent nations.

Boban’s notorious kick came in a clash between Dinamo Zagreb and Red Star Belgrade, the two biggest clubs in the Yugoslav First League. The game lasted just 10 minutes as mass violence erupted inside the stadium, as the Croats of Zagreb clashed with the Serbians from Belgrade in images that stunned the watching world.

In among the chaos, Boban – the captain of Dinamo – was seen calling for police intervention as authorities did little to calm the storm between the supporters.

The police involvement that did occur saw batons wielded and Boban’s infamous moment came when he took objection to the force used against a Dinamo fan. Racing to defend his colours and people, he launched a kick into the policeman’s chest in an iconic image for pro-Croatian independence.

Boban’s kick could have cost him his career, but fortunately for him – and European football – it failed to prevent a rise towards the elite level of the game.

Three years before that moment he had formed part of a talented Yugoslavian side that claimed the 1987 FIFA World Youth Championship, beating both Brazil and West Germany to win the tournament.

Starring alongside the likes of Robert Prosinecki, Davor Suker, and Predrag Mijatovic, it was a collection of talent that could have reached huge heights had Yugoslavia not broken up in the immediate aftermath of their sporting success.

Boban’s talents had been courted by several sides across Europe, however, and it was AC Milan who won the race to sign the midfielder.

Creative, hard-working and versatile, he had all the ingredients to succeed in a major European league and, after a season-long loan spell at Bari to aid his adaptation, soon became an integral part of the Rossoneri’s impressive team.

He formed a fine partnership with Demetrio Albertini in Fabio Capello’s successful side, supplying grit and guile in a box-to-box role at the San Siro.

His first two seasons as a regular with Milan saw the club win back-to-back Scudettos, whilst on each occasion Capello’s charges also reached the Champions League final.

Milan travelled to Athens in 1994 looking to avenge their final defeat to Marseille the previous season, though were regarded as huge underdogs against a Barcelona side viewed as world football’s finest.

Milan were without Marco van Basten through injury and the suspended duo of Franco Baresi and Alessandro Costacurta, their depleted side given little chance against the ‘Dream Team’ from Catalonia.

What followed was a seismic shock, not just in result but in both performance and scoreline as the Italians thrashed their heavily-fancied opponents 4-0 in the Greek capital.

It was, and remains, arguably the greatest performance in a European final as Milan celebrated their coronation as champions of the continent. Further success came in the following seasons, including a third league winners’ medal for Boban during the 1995/96 campaign.

That summer also provided a breakthrough for Croatia as the newly-independent nation competed in a major tournament for the first time. There was a sense of intrigue around the Croats as they travelled to England for the European Championship, having topped a qualification group containing Italy.

Croatia opened the tournament with a win over Turkey, before a 3-0 thrashing of holders Denmark announced Miroslav Blažević as potential dark horses. Boban scored the second in the win over the Danes, arriving at the back post to turn home Davor Suker’s cross.

Propelled by Suker’s goals and the midfield talents of Boban and Prosinecki, Croatia reached the quarter-finals before being defeated in a bruising contest by eventual champions Germany.

Even given their exit it had been a tournament to celebrate and two summers later Croatia arrived at the World Cup in France with increased expectations.

It mattered little as the Croatians again impressed at a major finals, with Boban leading the side in exemplary fashion throughout the tournament.

Croatia progressed to the knockout rounds after beating Jamaica and Japan in the group stage, before edging past Romania to reach the quarter-finals.

That win set up a rematch with Euro ’96 conquerors Germany, with Croatia producing an outstanding performance to beat the European champions 3-0 and reach the last four.

Their run came to an end against host nation France despite taking an early lead, Boban at fault for the equaliser after surrendering possession to Lillian Thuram in a dangerous area.

It was a disappointing end to a fine tournament, though Croatia bounced back to win the third-place play-off with the Netherlands as Boban teed up Suker for the decisive goal in a 2-1 win at the Parc des Princes.

Boban returned to club football and added a fourth Serie A winners’ medal to his collection before leaving Milan, flourishing as a senior part of the side during the 1998/99 campaign.

His vision for a pass saw him provide the ammunition as George Weah and Oliver Bierhoff scored the goals that brought another championship to the San Siro, a 2-1 win over Perugia on the final day of the season clinching the Scudetto.

Rui Costa’s arrival from Fiorentina led to his eventual departure in 2001, leaving for a brief spell at Celta Vigo in which he made just six appearances before retirement.

It marked a quiet end to a career that had delivered so much, his list of accolades including four league titles, the Champions League, three Supercoppa Italiana and the UEFA Super Cup with Milan.

The nineties saw Croatia emerge from the challenge of conflict in the Balkans to become a new footballing force, their cult side of the decade led by the brilliance of Boban.

Tenacious and technical with the right blend of aggression and talent, he became a national treasure for a new nation and a vital part of Milan’s midfield.