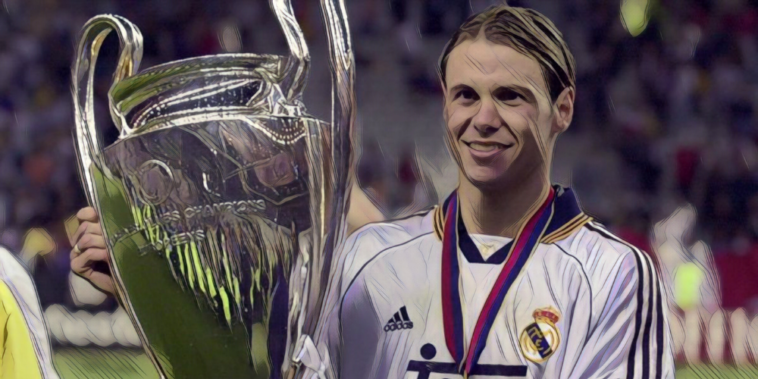 Each April, it is difficult to navigate footballing social channels without being witness to a moment of skill that has come to define Fernando Redondo.

The midfielder’s assist for Real Madrid against Manchester United during a Champions League quarter-final clash between the sides has become his signature highlight in an era in which internet reels pays tribute to talents of the past.

Redondo’s assist, a bamboozling of Henning Berg near the Old Trafford touchline before assisting Raul, was as maverick as it was magic, a microcosm of a gifted midfielder who helped reestablish Real Madrid at the pinnacle of European football.

Redondo’s career never scaled the heights of individual acclaim or international honours, but he made a permanent impression on the history of arguably world football’s most prestigious club.

His rise began in Buenos Aires, Argentina. Born into comparative privilege when assessed against several South American success stories, he found his calling with a ball at his feet, influenced in part by the career of his footballing father, Fernando senior.

Argentinos Juniors were the side to spot his precocious ability, as Redondo was introduced into the system of a club that had produced the likes of Diego Maradona and José Pekerman before him.

Technical and tenacious, he appeared a step ahead of those around him as the Argentine side sought to develop his precocious talent and eradicate an occasional tendency to overelaborate in possession.

He made his debut as a 16-year-old, before establishing himself in the side during the late eighties with a move to Europe soon beckoning for the young midfielder.

Hopes of receiving a fee for their prized possession were ended following an administrative error by Juniors, whose failure to renew club contracts paved the way for Redondo’s move to Spain.

Jorge Solari identified his compatriot as a player who could help accelerate his progress of Tenerife, having been appointed as coach of the island club after their narrow avoidance of relegation the previous season.

Redondo’s talents flourished as he anchored the Tenerife midfield, though all in a manner of sophistication as opposed to the snarling demeanour often associated with defensive duties.

Redondo’s flowing hair and flamboyance became a defining image of a successful era for the side, one that accelerated following the arrival of Jorge Valdano as manager as UEFA Cup qualification was secured.

Tenerife’s talented team twice denied Real Madrid the title on the final day of successive seasons, and the capital club soon raided the islanders for both head coach Valdano and his midfield lynchpin.

There is arguably no bigger platform in world football than Real Madrid, but Redondo soon became the darling of the Bernabeu following performances that mixed elegance with tactical erudition.

As Ivan Zamorano raced towards the Pichichi and Michael Laudrup pulled the strings in an advanced position, Redondo’s role was no less important as Real ended the Catalan’s dominance of La Liga to be crowned champions in 1994/95.

Redondo was the architect of attacking moves from deep, ‘El Principe’ bringing both brilliance and balance to the side as the creative conductor of the Madrid midfield.

The Argentina remained central as Real won a second title two seasons later, but the club’s hierarchy moved through a succession of managers as European glory evaded the side.

Real’s grandeur had been built on their winning of the first five European Cups in the 1950s, but none had been added to the club’s cabinet in the three decades since their sixth title in 1966.

Valdano and Fabio Capello had both failed to bring success on the continent, whilst Jupp Heynckes seemed the next coach set for the sack following a disappointing domestic season in 1997/98.

Real finished fourth in Spain, but made progress in the Champions League after eliminating both Bayer Leverkusen and defending champions Borussia Dortmund to reach the final.

Juventus – through to their third consecutive final – started as strong favourites at the Amsterdam Arena, as Redondo came face-to-face with one of Europe’s great midfield trios in Edgar Davids, Didier Deschamps and Zinedine Zidane.

The latter arrived as arguably the best player in world football and Real’s game-plan involved the stifling of the mercurial Frenchman, a combination of Redondo and Christian Karembeu ensuring the Spanish side executed their manager’s demands.

Real Madrid has won 16 league titles in the period between their sixth and seventh European Cups, but Predrag Mijatović’s second-half goal – rounding the goalkeeper before firing home from an acute angle – ended the club’s so-called ‘wilderness years’.

Real were back at the summit of European football.

Having turned down a call-up ahead of the 1990 World Cup squad to concentrate on his law studies, his hopes of success four years later ended following Diego Maradona’s drug ban and a shock last-16 exit to Romania.

It proved the beginning of the end for Redondo and La Albiceleste, as a falling-out with Daniel Passarella – a coach who controversially sought to ban long hair, earrings and homosexuals from the squad – saw him excluded for France ’98.

He earned just 29 caps amid culture clashes, though even his fleeting fortunes saw him named in an all-time XI by the Argentine Football Association.

Back at club level the managerial merry-go-round continued at Real Madrid with Heynckes departing despite their Champions League triumph, both José Antonio Camacho, Guus Hiddink and John Toshask all hired and fired across the next 18 months.

Vicente del Bosque’s arrival brought temporary stability and the incoming boss ensured Redondo remained the centre-piece of his side, valuing the midfielder’s ability to knit together the side with moments of calculated creativity.

Del Bosque’s early reign had seen mixed results, but the turn of the new year saw Real Madrid begin to gain momentum during the 1999/2000 Champions League campaign, a run that was kick-started in part by Redondo’s extravagance at Old Trafford.

The Spaniards travelled to face the holders after a goalless first leg in Spain, the Red Devils strong favourites to eliminate a side whose domestic form had been turbulent.

Del Bosque opted for a bold attacking line-up that thrust huge responsibility on Redondo, but the tactics paid dividends as Los Blancos secured a famous victory.

Roy Keane’s own goal handed the visitors the advantage, before Raul made it two. Redondo’s irresistible moment of skill, however, was the moment of the match.

Racing forward down the left hand side, the midfielder finds Henning Berg in close proximity, the defender looking to guide the Argentine into a channel of no escape.

The innate expressionism Redondo had carried from his formative years came to the fore however, he backheeled the ball between Berg’s striding legs before collecting possession on the byline and rolling a cross for Raul to tap home.

United scored twice to to provide some consolation, but it was Real who marched into the last four to face a Bayern Munich side who had won both meetings between the sides during the competition’s group stages.

Del Bosque’s side secured a memorable 2-0 win in front of a fanatic home crowd in the first leg, before standing firm in the second to progress to a second final in three seasons.

Valencia awaited in the first final meeting between two teams from the same nation, but it proved a mismatch in Paris as Real dominated to be crowned European champions once more.

Redondo was peerless, his craft and class ensuring Madrid’s midfield outclassed their opposition, in what proved the South American’s swansong despite his own coronation as UEFA’s Club Footballer of the Year.

Presidential change led to personnel changing, the arrival of Florentino Perez leading to the arrival of a Galactico era and Redondo’s move to AC Milan.

Fans remonstrated with the decision outside the club’s stadium, but the Argentine’s Real romance came to a close as an established icon was replaced with expensive imports.

Injuries decimated his time with the Rossoneri despite adding a third Champions League winners’ medal in 2002/03, but the finest football of Redondo came in the confines of the Santiago Bernabeu.

In the famous all-white kit of world football’s biggest club, he was the star before the superstar signings and a man whose elegance aided Real’s return to club football’s summit.