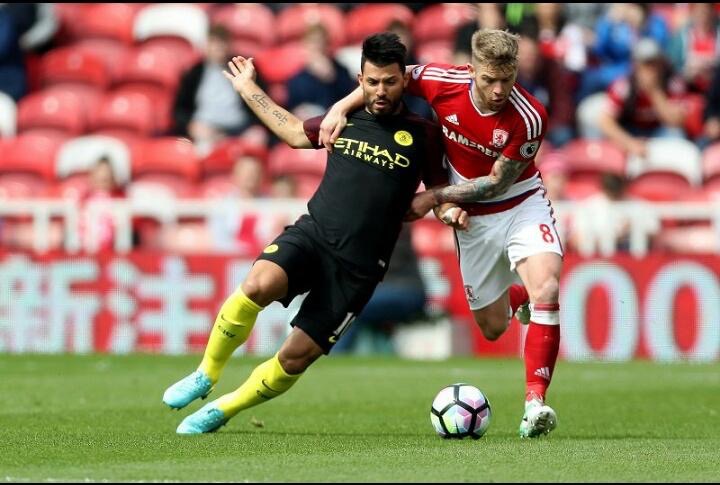 In a game of vital importance to both sides’ ambitions, the fixture threw up an entertaining, enthralling spectacle.

With much at stake both teams were chasing the win, although they would have to settle for a share of the spoils.

Middlesbrough actually have an attacking instinct

If there’s one thing we’ve learnt about Middlesbrough this season it’s that ambitious, attacking football just isn’t their thing.

Since Aitor Karanka’s departure little has changed on that front, however the display against Man City proved that somewhere within their squad there are players capable of causing damage.

Mainly in the first half, sporadically in the second, Boro got forward and looked at their best when putting City under pressure. Stewart Downing looked rejuvenated, his companion on the left George Friend also bombed forward on a number of his trademark forays.

Ally that with the obvious threat up top in Alvaro Negredo, they caused Pep Guardiola’s men plenty of problems, with Negredo’s fantastic finish rounding off some impressive counter-attacking football.

Unfortunately it appears to have come too late for Boro. You have to feel that had they played this way on just a few more occasions, they wouldn’t now be staring down the barrel of that relegation gun.

City and United both sit a healthy six and five points respectively above Arsenal in the Premier League, yet the Manchester clubs last two results have allowed The Gunners to sense an opening. Arsene Wenger’s men have a game in hand on their rivals, and despite defeat to local enemy Spurs, will feel they’re right back in it after seemingly being well out of it.

It’s City’s form especially that’s perhaps been most alarming. Just the two wins from their last eight Premier League games has seen them lose ground on second spot and begin to look curiously over their shoulders.

Game’s against the likes of Middlesbrough offer up the best opportunity to gain maximum points, so Guardiola will have taken no pleasure in snatching a draw from the jaws of defeat at The Riverside.

Of their final four games, the next three are all at home. Nine points from nine is the expectation on paper, with Crystal Palace, Leicester City and West Brom all rocking up at The Etihad. However, you’d expect them to be a little more difficult than routine. Any displays like the one at Boro might see them drop further valuable points.

How Middlesbrough have missed Calum Chambers

He may have scored against City, however it hasn’t been his goal scoring prowess that they’ve missed (that goal was his first of season).

He made his comeback after a seven game injury lay off in that disastrous defeat at Bournemouth, though he could hardly be blamed for the failures that day. A system that didn’t work as well as being thrust straight back into a relegation battle, Chambers wasn’t given the easiest of returns.

Yet today, his quality was on show. In what looked like a more orthodox back four, he partnered Ben Gibson for the first time in that formation since the 0-0 draw at home to Leicester on 2nd January. It is that settled system that’s been missing for Boro recently, Chambers being a huge part of Middlesbrough’s impressive defensive record.

Following that stalemate against The Foxes, Middlesbrough had the joint-fourth best defence in the Premier League (with Man City and Arsenal), having conceded just 22 goals. A healthy goal difference of minus five easily the best in the bottom half.

It is no coincidence then that Chambers’ absence/out of position appearances have had a detrimental effect on Boro’s results. His return is welcome, just painfully too late to help save Boro from impending relegation.

Sane and Sterling: Guardiola’s subs made quite the impact

It’s fair to say that until Leroy Sane and Raheen Sterling entered the fray, Manchester City had looked very ordinary by their standards.

Despite starting with a 3-5-2 formation, wing backs Gael Clichy and Jesus Navas weren’t quite as threatening as their boss might’ve hoped.

Just five minutes into the second half both Sane and Sterling came on to try and add fresh impetus, to put Boro on the back foot, and that is exactly what they did.

Sane was a constant outlet for City. His pace and skill allowing him to get the better of Fabio down the left on a number of occasions. Sterling did well with some neat interchange play on the opposite flank, his speed and taking to the byline on a number of occasions, getting in behind a generally well marshalled Boro backline.

It was clear that Middlesbrough struggled at times with the pace and trickery both players brought to the game, City looking instantly in control where before they appeared anything but.

Boro had the better of the exchanges in the first half, taking the lead, yet there were no questions of who was the superior team once Guardiola introduced his flying wingers. Perhaps the one blot on the German’s copybook however was the questionable penalty decision that went his way. A seemingly innocuous coming together between him and Marten De Roon resulted in Kevin Friend pointing to the spot.

Incensed and what they felt was a clear attempt to con the officials, Boro players surrounded the referee, his fall sparking a melee between both sets of players. It was a harsh decision to say the least, one that perhaps tarnishes Sane’s otherwise impressive performance.

Despite the penalty, you feel City would perhaps have scored at some point, thanks in no small part to Sane and Sterling.

Is it time for video ref’s?

As already referred to, Man City profited from what was a highly debatable penalty decision from referee Kevin Friend. Leroy Sane’s soft fall from barely a challenge by Marten De Roon was enough for Friend to call a foul, much to the dismay of fans and players alike, not least De Roon himself.

Minimal contact was made in a collision made the most of by Sane who ran across the Dutchman looking for the foul, with Friend on hand to grant him his wish by pointing to the spot.

With his assistant on the opposite side of play, Friend’s view wasn’t exactly the greatest, yet he made the call without hesitation. Only moments later replays showed that Sane had made a real meal of it, but the current rules dictate that these decisions are final.

However, this was yet another prime example of where video refs could well be put to good use.

Such decisions can have massive consequences at either end of the table, Boro fighting for their lives would feel they could’ve gone on to win the game had the penalty not been given.

In today’s climate, with so much at stake, it does seem baffling that these game changing, often season defining moments can’t be clarified within the small window of seconds it takes for viewers at home to see angle after angle of replays.

The debate rages on.

Another well written article – well argued points and food for thought where the introduction of video refs is concerned. I’ve always been of the opinion that the number of wrongly called game changing decisions evens itself out over a season. However with the introduction lately of the well engineered fall in the box…the ‘self tripping up’…..and other dubious actions, I am inclined to be on the side of video technology. Sane”s orchestrated fall (from grace you could say too) shows just how difficult it is for referees in today”s game and perhaps now is the time to at least trial options available to help stamp out this part of the game which seems to have become more prevalent as the seasons come and go. The (incorrect) decision in this game yesterday was harsh on Boro but to their (and the fans) credit it spurred them on to right the wrong and instilled everyone with the passion for the game which has been sadly lacking on too many occasions this season. Well done Boro for making us all proud yesterday……maybe too little too late but it made it a memorable afternoon and gave the TV pundits something good to say for a change. UTB!!!!