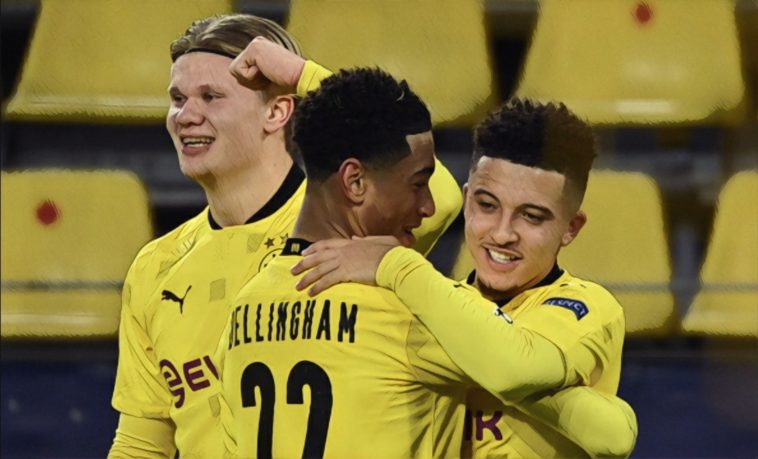 The ongoing impact of the coronavirus pandemic has led to financial difficulties amongst several of Europe’s leading clubs, some of the game’s most notorious names feeling the economic squeeze.

Amongst those include Borussia Dortmund with the club having announced losses of more than €40m for 2019/20, the continued loss of match-day revenue greatly impacting the German side’s finances.

Dortmund are no strangers to dire financial situations having come back from the brink of financial ruin in the early 2000s, a period which saw Bundesliga rivals Bayern Munich contribute towards bailing out their rivals in honourable fashion.

Concerns have now been raised following a disappointing run of domestic form for Dortmund, who after a bright start to the season currently sit sixth in the Bundesliga and are in danger of missing out on Champions League qualification.

Without the lucrative revenue provide by club football’s biggest competition, Dortmund could be forced to sell some of their finest assets during the summer transfer window and Europe’s elite are sure to be monitoring Dortmund’s precarious situation ahead of a potential firesale.

The jewel in the Dortmund crown at present, Europe’s wealthiest sides are already queuing up to sign Erling Haaland given the forward’s incredible performances since moving to German football.

Haaland burst onto the scene last season during a prolific run of form for Red Bull Salzburg, scoring 28 goals in just 22 appearances over the first half of the 2019/20 campaign, including a hat-trick on his Champions League debut and eight goals in just five group stage fixtures.

Dortmund won the race to sign the Norway international and he made an immediate impact at the Westfalenstadion, scoring a hat-trick as a substitute on his first appearance before a sensational run of goalscoring form.

Named as winner of the 2020 Golden Boy award as Europe’s best U21 player, Haaland has now netted an incredible 39 goals in just 41 appearances for Dortmund and there is no shortage of suitors interested in signing the explosive forward.

Manchester United, Manchester City, Chelsea and Liverpool have all been credited with an interest in bringing the 20-year-old to the Premier League, whilst Real Madrid are also known admirers of the Norwegian.

Haaland could spearhead any leading side for the next decade and is already a player for the here and now, a phenomenal young footballer with pace, power and a ruthlessness when presented with goalscoring opportunities.

The youngster has a release clause of €75m that will become active during the summer of 2022, but Dortmund may feel it makes financial sense to cash in on the forward this summer with the Bundesliga side able to command a greater sum than that obligated fee.

Jadon Sancho’s future was one of the sagas of last summer’s transfer window with the winger the subject of interest from Manchester United, though Dortmund’s British transfer-record valuation and the financial impact of the ongoing pandemic ultimately dissuaded the Red Devils from making an offer.

Sancho has emerged as one of the brightest young stars in the game since making the brave decision to leave Manchester City for Germany, flourishing amid regular expose to first-team football to become one of the Bundesliga’s leading talents.

After a period of adaptation the winger exploded during the 2018/19 season with 12 league goals and a further 14 assists, numbers he would improve upon the following campaign after registering a staggering 33 goal involvements in just 25 league starts.

Sancho’s incredible ability to beat players and provide consistent end product have made him one of the most valuable prospects in world football, though the £105m price-tag on his head last summer looks set to be lowered at the end of the campaign.

Manchester United remain the favourites for his signing, though Chelsea, Liverpool and former side Manchester City are also considered amongst his potential destinations.

Sancho would no doubt relish the chance to prove himself in the Premier League after breaking into the senior England side during his time at Dortmund, the fleet-footed forward a player who would undoubtedly add huge value and entertainment to the division.

Dortmund have become somewhat of a talent factory for emerging stars in recent years and Giovanni Reyna appears the next prospect set for a huge future in the game.

The midfielder – son of former US internationals Claudio and Danielle Egan Reyna – moved to Dortmund from New York City in 2019 and has wasted little time in making an impression, breaking into the senior side on a regular basis this season.

Reyna became the second-youngest American to score a Bundesliga goal after netting his first in the competition against Borussia Monchengladbach in September, scoring in a 3-0 win aged just 17 years and 311 days.

The teenager’s strong start to the campaign continued with three assists in one fixture against Freiburg, his performances earning him senior international honours after making his debut for the USA in the autumn internationals, scoring his first goal with a free-kick on his second appearance against Panama.

The 18-year-old has provided seven goal involvements in 15 league starts this season and his style has impressed, Reyna a player with flawless close control and an ability to glide past players as he steps on the throttle.

Dortmund signed the US international to a new long-term contract in November but could be forced to cash-in on a player previously described by sporting director Michael Zorc as an “important part of Borussia Dortmund’s sporting future.”

Five of the best Bundesliga to Premier League transfers

Jadon Sancho is not the only exciting English talent currently making a name for himself at Borussia Dortmund, Jude Bellingham having swapped the Championship for the Champions League after signing from Birmingham City last summer.

Bellingham was courted by Manchester United and was shown around the club’s facilities before deciding on Dortmund as his next destination, signing in a deal worth a reported £25m.

It is a transfer that has provided Bellingham with a chance to showcase his talents at the highest level and he has made a promising start in German football, becoming the youngest scorer in Dortmund’s history and making 17 Bundesliga appearances in addition to a further six – including four starts – in the Champions League.

Bellingham was fast-tracked into the England side last year and made his senior debut against Ireland in November, becoming the Three Lions’ third-youngest full international behind only Theo Walcott and Wayne Rooney.

Bellingham’s decision to move abroad will have been designed with his medium-term development in mind, though the midfielder shapes as one of Dortmund’s most saleable assets and the lucrative funds of the Premier League will be circling should he become available.

Full-backs are amongst the most important positions in the modern game and in Raphael Guerreiro Dortmund possess a player ready-made to improve almost any side on the continent.

The Portugal international has been a continued source of creativity since signing for the Bundesliga side from Lorient almost five years ago, enjoying the best season of his career last term with eight goals and two assists in Germany’s top tier.

Guerreiro has continued to produce remarkable numbers this term with eight assists for the campaign, a figure bettered by just three players across the division in Bayern Munich trio Thomas Muller, Joshua Kimmich and Kingsley Coman.

The 27-year-old also leads the division for progressive passes, whilst his versatility would be a huge asset to any interested suitors with the star comfortable both at left-back and in midfield.

Guerreiro will form part of the Portugal side looking to retain the European Championships this summer and an impressive tournament could see the defender attract significant interest from abroad.