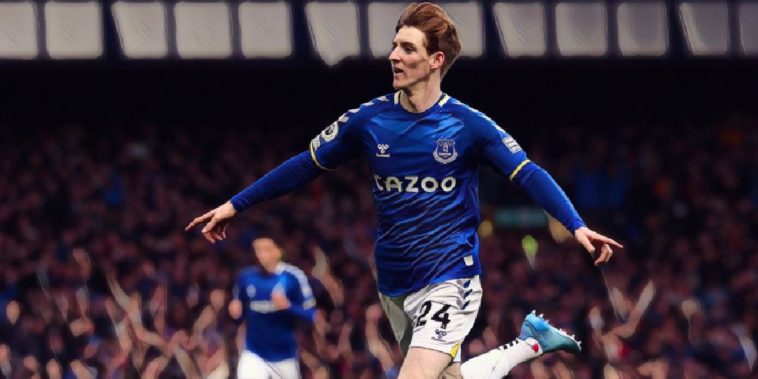 Everton’s survival hopes were given a massive boost today as the Toffees beat a poor Manchester United side 1-0 at Goodison Park.

Everton were struggling to get a foothold in the game and just as groans of discontent became audible from the Goodison crowd academy graduate Anthony Gordon gave the home supporters something to be happy about. The ball fell nicely to the 21-year-old boyhood Toffee and his curling effort from the edge of the area took a wicked deflection off United skipper Harry Maguire and flew into the net past a hapless David de Gea.

United pushed on in search of an equaliser, but they lacked intensity and creativity despite Rangnick brining on Juan Mata and Anthony Elanga. Apart from a long distance effort from Paul Pogba and a last minute attempt from Cristiano Ronaldo – that Pickford saved well – United rarely looked like scoring and Everton held on for a deserved lead.

“It’s very important, especially after the last result against Burnley,” Gordon told Sky Sports. ”We were a bit disappointed of course, but for us to react with a performance and result like that is testament to us as a team.

“You’re not going to have the ball a lot, so it’s about digging in and riding out certain moments in the game. In the last 20 minutes we were gone, but there were blocks and tackles and that’s what won us the game.”

Gordon then went on to discuss his own form and paid credit to the Goodison crowd that roared their side on to victory.

“I’m just taking it game by game, trying to be as consistent as possible and just trying to listen to the manager and keep improving. If I go with that approach, I can’t go far wrong.

“It’s obviously a tough situation for everyone around the city, but we’re a city who sticks together. The fans I speak to are very optimistic. You heard the fans today – they were like a 12th man. They’re that little bit of adrenaline we need to keep on going.

“As I said before, we had plenty of games like this with big performances but we haven’t followed it up. It’s about winning and becoming a winning machine.”