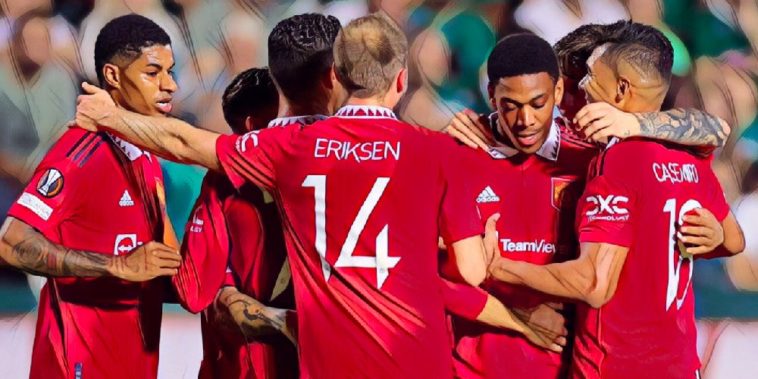 Manchester United survived a massive scare as they came from behind to beat Omonia Nicosia 3-2 in the Europa League.

United came on the back of their 6-3 humbling in the Manchester derby at the weekend, and put out a strong side against their Cypriot opponents.

Unsurprisingly, United bossed possession straight from the off, and they created a few half-chances, with Cristiano Ronaldo and Antony both forcing Fabiano into saves.

However, with 34 minutes on the clock, the Red Devils were left stunned as they fell behind to the European minnows. Tyrell Malacia was caught in possession in the opposition half before Brazilian forward Bruno led a rapid counterattack. He laid the ball into Iranian striker Karim Ansarifard, who kept himself onside before producing a fine finish beyond David de Gea.

Erik ten Hag brought on Luke Shaw and Marcus Rashford at the interval, and the substitution paid almost immediate dividends. Bruno Fernandes picked up the ball deep in his own half and fired the ball towards Rashford. Despite a poor first touch from the England international, he still managed to get the ball under control, before curling it beyond Fabiano from the edge of the box.

Having scored twice off the bench in the derby defeat, Ten Hag again brought Anthony Martial into the action just after the hour mark, and within 60 seconds the 26-year-old gave the visitors the lead. Lisandro Martinez fed the ball into Rashford who produced a lovely little flick to find the Frenchman, who fired home a low finish from a similar position to the one from which Rashford had levelled the scores.

7 minutes after coming on as a substitute, Marcus Rashford equalises for Manchester United!!❤️#UEL pic.twitter.com/fhhuDUaNMc

With six minutes left to play, United then added a third. Rashford went on a driving run towards the box before laying it off to Ronaldo, and while his shot was wayward, Rashford had continued his run into the box and tucked home at the back post.

Omonia Nicosia did pull a goal back within a minute through Nikolas Panagiotou to set up a tense finale, though the Red Devils held on to claim three vital points in Group E.

Speaking after the game, Rashford – who finished with two goals and an assist – felt United didn’t play too badly in the game, but said they made mistakes at the back.

“Job done, but we would have liked to have played better. We didn’t defend badly, but we made mistakes.

“The first 35 minutes until they scored we were playing well, we just could have got in behind them more. Then when he made the subs he wanted us to be more dynamic, take chances going forward and score goals.”

Rashford has often been utilised through the middle of United’s attack under Erik ten Hag, though replaced Jadon Sancho on the left this evening, a position which he says is ‘more natural’ to him.

“Left side is probably more natural for me, but I like playing both [left wing and centre forward] and helping the team. If we have got injuries you never know what might happen, where you might be needed to play.”

Asked about the performance of Anthony Martial following his latest goal, Rashford said: “He is a massive player for us, has been for a long time. When he is happy and at it, he is an unbelievable player. We’ve both been injured, him longer than me, so it is good for him to get minutes and make an impact.”