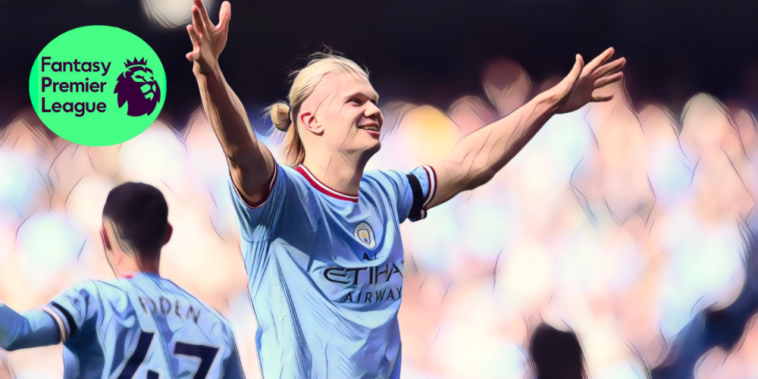 The weekend’s fixtures include a fascinating match-up between Arsenal and Liverpool, with the league leaders facing a real acid test against a Liverpool team in desperate need of points to remain in touch.

Leicester will hope to continue the momentum of a first win this season at Bournemouth, while Manchester United travel to Everton looking to bounce back from their derby mauling last time out.

Can the captaincy really go anywhere else this week?

Last weekend the Norwegian goal-machine made a mockery of those who placed the armband elsewhere, making light work of a ‘difficult’ fixture on paper with another hat-trick. His Manchester derby treble made it three hat-tricks for the season already, while he added in two assists to haul his biggest return (23) of the FPL season to date.

Withdrawn at half-time in midweek, he will have added freshness as Southampton visit the Etihad this weekend. The Saints look like prime opposition and are on a run of three straight losses, while Ralph Hasenhuttl’s side have failed to keep a clean sheet so far this season.

In truth, the opposition matters little when assessing Haaland for the armband and he has failed to score in just one game this season across all competitions. He really is that good. Scarily good.

James Maddison vs Bournemouth (A)

Leicester are up and running for the season after ending their winless start to the season last time out. The Foxes did so in impressive fashion, after thrashing Nottingham Forest 4-0 in an East Midlands match-up at the King Power Stadium.

James Maddison has been the bright spark in an otherwise drab start to the season at Leicester, with the midfielder seemingly hell-bent on forcing his way into Gareth Southgate’s plans for Qatar.

Southgate has strangely overlooked the 25-year-old despite a run of career-best form and Maddison is among the most influential players in the Premier League right now. He scored two brilliant goals and created another against Forest, taking his total to five goals and two assists from seven Premier League appearances this season.

Dating back to last season, he has 14 goal involvements in his last 11 league appearances.

Callum Wilson returned to the Newcastle side with a goal last time out, as the Magpies recorded an impressive 4-1 win at Fulham.

Wilson has been a reliable asset, when fit, for FPL managers and will lead the line for Newcastle against Brentford this weekend, with Alexander Isak out through injury.

Wilson has scored three goals in four starts this season, while only Erling Haaland can boast better xG/90 and npxG/90 figures than the 30-year-old this season. His six big chances are also a leading total at Newcastle despite missing half of the club’s league fixtures to date.

Having signed a new contract earlier this week, he will be desperate to celebrate with a goal against a Brentford team with just one clean sheet in 20 away Premier League fixtures.

Captaining a defender is always a maverick move and can backfire on occasion, but Reece James is a credible captaincy option for gameweek 10.

Chelsea host a Wolves side short of firepower this season with the visitors arriving at Stamford Bridge as the lowest scorers in the Premier League. Wolves – who sacked Bruno Lage this week – have scored just three goals in eight games and the prospect of points at both ends of the pitch could favour a brave punt on James.

The 22-year-old scored one and created another as Chelsea thrashed AC Milan in midweek and has been directly involved in 19 goals in all competitions since the start of last season.

It is a remarkable return for a defender and James has the capability to produce a huge haul for Fantasy Premier League managers this weekend.