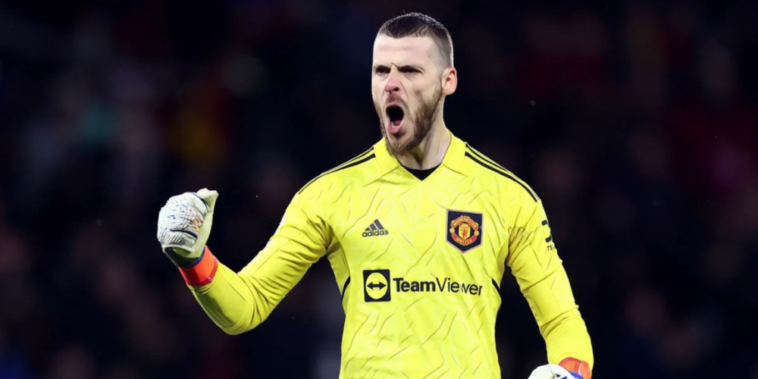 David de Gea has climbed into Manchester United’s all-time top ten appearance makers after the goalkeeper featured in his 510th game for the Red Devils this week.

De Gea has been an ever-present in goal for United for more than a decade and is the first player from outside the UK and Ireland to enter the club’s top ten.

Here are Manchester United’s 10 leading appearance makers of all time.

David de Gea made his 510th appearance for Manchester United during the club’s 3-0 win over Bournemouth this week, a fixture which saw the Spaniard enter the top ten.

De Gea signed for the club as a teenager from Atletico Madrid and overcame a rough start to emerge as one of the Premier League’s best goalkeepers.

An incredible honour to join the top 10 appearances in the history of this club – We have more to achieve together 🔴 pic.twitter.com/ZtGqqt3Xhu

His list of honours include a Premier League title, an FA Cup, a League Cup, and the Europa League, while he has been named in the PFA Team of the Year on five occasions and has won the club’s Sir Matt Busby Player of the Year award a joint-record four times.

Joe Spence is level with De Gea on 510 appearances, with the winger United’s star name for more than a decade between the two World Wars.

Irwin joined the club from Oldham Athletic and became a stalwart in the club’s most successful era, as he helped the Red Devils to seven league titles, two FA Cups and the Champions League among his honours. The most decorated Irish footballer of all time alongside former teammate Roy Keane, Irwin was comfortable on either flank, a fine passer, and offered goal-threat from set-pieces.

Such was his reliability, Ferguson once claimed that Irwin would be the first name on his all-time Manchester United team sheet.

There was no stopping this Denis Irwin stunner at Anfield 😍#MUFC pic.twitter.com/KwjWiMeWba

“Honestly, I would say Denis Irwin would be the one certainty to get in the team. I called him an eight out of ten. At Highbury in one game, he had a bad pass back in the last minute and [Dennis] Bergkamp came in and scored.

“After the game the press said ‘You must be disappointed in that pass back’. I said: ‘Well, one mistake in 10 years isn’t bad’. He was an unbelievable player.”

Tony Dunne edges out compatriot Denis Irwin for appearances, with similarities between the duo.

Both were unassuming Irish full-backs in successful sides, with Dunne forming part of Matt Busby’s trophy-winning team of the 1960s. He signed from Shelbourne at the start of the decade and spent 13 years with the club, racking up 535 appearances in all competitions.

A league title winner in 1965 and 1967, he featured in every round as United won the European Cup in 1968, becoming the first English club to be crowned champions of Europe. After being released in 1973 he signed for Bolton, where he made more than 200 appearances.

Matt Busby made Alex Stepney the most expensive goalkeeper in history in 1966, securing a £55,000 deal for the shot-stopper after just three months at Chelsea.

It was a deal that proved a fine investment as Stepney played 539 games for the Red Devils, with Busby calling the goalkeeper ‘the single most important factor behind our championship in 1967’.

The following season Stepney starred as the club won a maiden European Cup. His save in normal time from Eusebio paved the path for an extra-time win over Benfica in the final, one of countless stops Stepney would make during a decorated career at Old Trafford.

Rooney-mania had swept across the Premier League following the teenager’s emergence at Everton, with the precocious gifts of the forward sparking a scramble for his services. United won the race after Rooney had shone at Euro 2004 and the 18-year-old wasted no time in announcing his arrival with a debut hat-trick in the Champions League.

His finest football came in 2009/10 as he won a PFA Player of the Year and FWA Footballer of the Year double, recognition for a career-best campaign of 34 goals. He scored 253 times for the club in all competitions, eclipsing Bobby Charlton as United’s all-time record scorer.

Rooney is also the leading scorer in the Manchester derby with 11 goals.

Gary Neville remains one of the Premier League’s great one-club men, having come through the ranks before spending his entire career at Old Trafford.

The Bury-born full-back was a boyhood fan whose passion for the club was visible, during a career of dedicated service and consistency. He broke into the team as part of the fabled Class of ’92 and remained a fixture for almost two decades, racking up 602 appearances.

He won eight league titles, three FA Cups and two Champions League trophies among his honours, captaining the side to the 2006/07 Premier League after replacing Roy Keane in the role.

Bill Foulkes was a formidable presence for the Busby Babes, a key figure for the club both before and after the Munich air disaster. A survivor from that incident, he captained the side to the FA Cup final soon after the tragic accident as United lost to Bolton at Wembley.

He won First Division titles in 1956, 1957, 1965 and 1967, before lifting the European Cup in 1968. Foulkes scored a crucial goal in the thrilling semi-final draw with Real Madrid at the Bernabeu, as United reached the final for a first time.

Having initially began as a full-back, a move to a central role saw Foulkes thrive and he spent 18 seasons as a first-team player at Old Trafford.

Paul Scholes was one of several starlets who formed the home-grown spine of the Manchester United side in the nineties, as Fergie’s Fledglings became the dominant force in the division.

Scholes began his career as an attacking midfielder player where his eye for goal and late runs were a feature of the side, before evolving into a deep-lying playmaker with pinpoint passing in his later years.

Boasting exceptional technique, passing range, and a penchant for the spectacular, he was a central figure in the club’s greatest successes of the era, winning a domestic double in 1995/96 and a historic treble in 1999.

Scholes missed the Champions League final that season through suspension, but exorcised those demons with a semi-final winner against Barcelona in 2008. United went on to win the final, completing a league and European Cup double.

Scholes retired having won 25 trophies and 11 league titles, more than any other English player.

Arguably the greatest footballer in Manchester United’s history, Bobby Charlton scored 249 goals in 758 games during a historic career with the club.

Charlton broke into the team as a teenager and formed part of the Busby Babes team, with the midfielder surviving the Munich Air disaster before helping to rebuild and reshape the club’s history.

He won league titles in 1957, 1965 and 1967, while he also claimed the 1966 Ballon d’Or after his role in England’s World Cup triumph on home soil that summer. In 1968 he captained the side and scored twice in the final as United won the European Cup, beating Benfica in extra-time at Wembley.

Charlton was the leading goalscorer and appearance maker for both Manchester United and England at the time of his retirement, with immortality reached during an iconic career.

Ryan Giggs has made more appearances for Manchester United than any other player, having appeared for the club on 963 occasions.

Giggs’ career was one of record-breaking success and longevity, as he burst into the team as a teenager and remained a first-team fixture until past his 40th birthday. The most exciting of the club’s Class of ’92 talents, the Welshman was a whirling mix of speed and enterprising dribbling in his youth, tormenting full-backs with raw pace and trickery.

He formed part of the team that won a drought-breaking league title during the 1992/93 campaign and went on to lift the Premier League 13 times in total. Remarkably, Manchester United (20) and Liverpool (19) are the only English clubs to have won more top-flight crowns than Giggs.

He is the most decorated player in the history of English football, having won 33 trophies during a career with the Red Devils that spanned from 1990 until 2014.