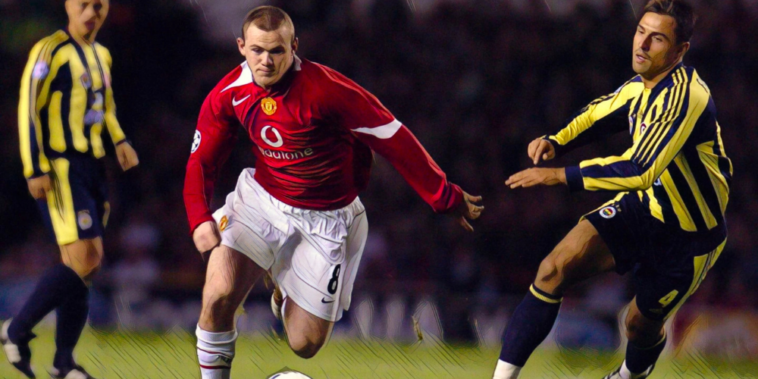 From the moment Wayne Rooney announced his arrival into the Premier League at Everton, his was a name spoken about with feverish excitement among football fans.

His emergence had been sudden and spectacular. Rooney’s talent had long been talked about in hushed tones at Everton, where his feats for the academy sides at Goodison Park left few in doubt that the Toffees had a special prospect on their hands.

Five days before his 17th birthday, the secret was truly out. Coming on as a substitute against defending champions Arsenal, Rooney scored a last-minute winner that catapulted him into the consciousness of the casual fan.

As the Arsenal backline back-peddled in retreat, Rooney bent a sensational finish beyond David Seaman to end the Gunners’ 30-game unbeaten run and become the youngest goalscorer in Premier League history.

From there his star continued to soar. An England debut at 17 made Rooney the youngest player to play for the Three Lions, before he burst onto the international scene during a scintillating Euro 2004.

That summer in Portugal, Rooney was unplayable. Still just a teenager, he produced the kind of performances that had many hailing the Liverpudlian as a once-in-a-lifetime talent.

Desire, drive, pace and power, Rooney arrived fully formed and willing to go toe-to-toe with the best defenders in European football. A metatarsal injury halted his progress in the quarter-finals, but Manchester United had seen enough of a starlet who had already outgrown his Evertonian roots.

“I am very excited. I think we have got the best young player this country has seen in the past 30 years,” Sir Alex Ferguson said after Rooney completed a £27m move to Old Trafford.

The tournament-ending injury suffered at the European Championship delayed his debut, but as Fenerbahce prepared to visit in the Champions League the news was out that Rooney was ready to return.

The Turkish side had won their first group game and despite a poor record on the road in Europe, were expected to pose an awkward challenge to the Premier League side.

Ryan Giggs opened the scoring inside seven minutes, meeting Kleberson’s cross to guide home a header into the far corner. United were up and running, but it would be the debutant who soon took centre stage and ten minutes later his moment arrived.

Ruud van Nistelrooy’s threaded pass sent Rooney scampering in behind, with the forward smashing an emphatic left-footed finish high into Rüştü Reçber’s goal to open his goalscoring account for the club.

“Wayne Rooney has scored for Manchester United, and it won’t be the last time you hear that,” Clive Tyldesley said on commentary – and the wait was not long.

Before the break, a maiden goal had turned into a debut double. Rooney’s second strike was similarly special, as he collected Giggs’ pass before letting fly from the edge of the area.

Allowing the ball to come across his body, he intelligently evaded the challenge of a Fenerbahce defender without touching the ball, before unleashing a vicious effort which skidded across the turf on its way into the bottom corner.

Rooney had arrived and the Red Devils were rampant as the half-time whistle blew at 3-0, as the concourse filled with fans excitedly discussing Rooney’s remarkable impact.

Marcio Nobre’s goal reduced the deficit for the visitors two minutes after the break, but it was little more than a consolation as the home side soon reasserted their dominance.

Van Nistlerooy was brought down on the edge of the area for a free-kick, with Giggs and Rooney stood over the ball with intent. The Welshman opted against pulling rank, allowing his teenage teammate – oozing with confidence – to take the set-piece.

Three short steps followed, before an arcing free-kick found the top corner. Old Trafford rose in unison to celebrate another moment of magic from Rooney, whose dream debut had resulted in a Champions League hat-trick.

🟥 Wayne Rooney marked his #UCL debut with a blistering hat-trick against Fenerbahçe #OTD in 2004! 🔥

The weak wall Fenerbahce formed may have aided his effort, but Rooney’s treble had made the watching world stop and applaud.

Rooney was everything his new fanbase had anticipated, raw and exciting, with a ferocious competitive streak and a clinical quality around goal. It was difficult to believe that this performance had come from an 18-year-old, such was the completeness of his game and a clear lack of nerves on the biggest of stages.

Rooney had become just the fourth man to score a debut hat-trick in Europe’s elite competition, and remains the youngest to have ever done so. His hat-trick had the rarity of coming entirely from outside of the box, with his repertoire of finishing remarkable for a teenager still finding his feet in senior football.

He crowned an unforgettable evening with an assist for David Bellion to score United’s sixth, a flicked header to release the Frenchman in behind to seal the rout.

Rooney almost missed out on a personal souvenir from his showing, with referee Frank De Bleeckere initially reluctant to give the hat-trick hero the game’s match ball despite his post-whistle pleas.

Fortunately for Rooney, Sir Alex Ferguson ensured he received his reward for a phenomenal night of football.

“I couldn’t believe it,” Rooney recalled to the Guardian. “The manager just said, ‘What? I’m not having that’ and went off to see the ref. Next thing he’s back with the ball and I couldn’t thank him enough.”

It was a sublime showing of precocity from Rooney, who at that time was the most extraordinary talent in European football. His combination of bullish strength and subtle touch saw him terrorise defenders, with his potential appearing limitless.

For those watching on it was impossible not to get excited. This was the sort of debut that leaves a lasting impression. Almost two decades after his first appearance in a Manchester United shirt, there has not been one quite like it.

Read – Unforgettable Debuts: A baby-faced Rashford announces himself to the world with Europa League brace